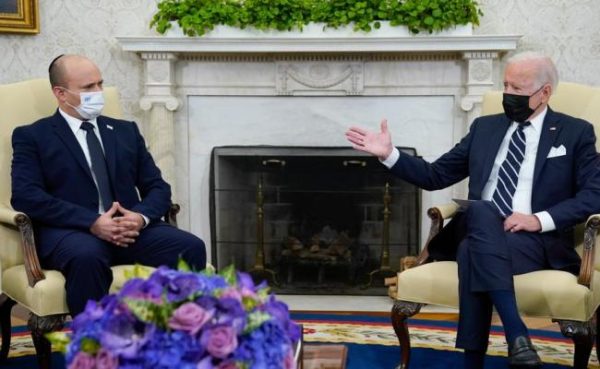 Watch out for Israeli trickery Joe!

The White House has confirmed that President Joe Biden will travel to the Middle East in mid-July. He intends to visit Israel, the Palestinian Authority and Saudi Arabia. The trip will be used to address outstanding bilateral and multilateral issues, including convincing the Saudis to pump more oil to bring down fuel prices. Among the key topics to be discussed will be the alleged Iran threat, a possible security alliance between Israel and Gulf states backed by Washington, the status of the US Consulate General in Jerusalem, and the future of the Palestinian Authority.

Biden has agreed to a controversial meeting with Saudi Crown Prince Mohammad bin Salman, in which he will ask the Kingdom to agree to “normalize” relations with Israel in addition to increasing its oil exports. There has also been considerable pressure on Biden to seek a commitment from the Prince to take steps to improve human rights in his country, but the subject is not likely to come up as it is Biden who is seeking concessions from the Saudis. The Prince, for his part, ordered the October 2018 killing of US resident and Washington Post journalist Jamal Khashoggi in Istanbul. Khashoggi had been highly critical of the Saudi monarchy, particularly regarding its human rights record. Some in Congress and the media have described the private meeting as inappropriate given that fact.

Indeed, pumping more oil aside, the trip is largely about doing many things to help Israel, which is expected to produce favorable reporting in the US media preceding the November mid-term election. Biden even described the trip as being “for Israel” and that loud sucking noise you hear is his repeated pledges of loyalty to the Jewish state. He has described himself as a “Zionist” and has enthused “My commitment to Israel is known and engraved in rock.” Lest there be any confusion in spite of all that, the White House statement regarding the trip also made very clear that the president will “reinforce the United States’ iron-clad commitment to Israel’s security and prosperity.” That means that Israel will not be pressured over its appalling human rights record, worse even than Saudi Arabia’s, to include the recent assassination of Palestinian-American journalist Shireen Abu Akleh. On the contrary, Biden is bearing gifts to reward the Israelis for being such great friends, including a proposal that increases US financial and logistical support for the Jewish state’s air and missile defense systems, which are already largely funded by Washington.

Other aspects reflecting the Israeli dominance of US-Mideast foreign policy include Biden’s convincing the Saudis and also representatives of the Gulf States to step up their efforts to actively counter what is being described as “threats from Iran.” It is being suggested that this might include a security arrangement, not quite an alliance, but a commitment by many of Iran’s neighbors to act jointly if the Islamic Republic threatens anyone in the region. The arrangement would have to include Saudi Arabia, the Gulf States and Israel, backed up by the US military presence in Kuwait, Bahrain and Qatar. Israel is also demanding a Plan B response proposal if Iran and Washington fail to restart the stalled Joint Comprehensive Plan of Action (JCPOA) nuclear monitoring program. Washington, under pressure from Israel, now appears to be reluctant to make the concessions that would reestablish the original plan and the Israeli government is seeking a commitment by the president to use force, if necessary, when Iran crosses an agreed upon “red line” by enriching uranium until it produces enough fissile material to put together a nuclear weapon. Of course, there is a trick to the demand as Israel claims that Iran already has enough enriched uranium to create one or more bombs.

Israel nourishes regional imperatives that might tempt it to steer the discussions in a direction that would be very favorable to itself at the expense of other US interests in the region. Israel’s leaders regularly boast about their ability to manipulate the American government. They might stage or manage an incident that takes place during the Biden visit to shift perceptions of the status quo in the Middle East. As Israel has demonstrated that at its most extreme it has little regard for American lives or property, one should not be surprised if something odd were to happen. Many credible observers credit the Israeli intelligence services with a whole series of attacks on American targets, possibly even including arranging the assassination of John F. Kennedy and instigating 9/11. And then there are also the Lavon Affair in 1954 which involved the bombing of US government buildings in Egypt, and the attack on the USS Liberty in 1967 which killed 34 American sailors. To be sure, Israel can be ruthless and its security services are very effective at assassinations and false flag attacks.

Israel wants very much to have two developments to emerge from the Biden visit. First is to effectively eliminate Iran as a potential threat by degrading its military and preventing any moves to go nuclear and second is to delegitimize the Palestinians as negotiating partners for some kind of two-state solution, which Biden claims to support even though Israelis routinely and generically refer to the Arabs as “terrorists.” To prevent blowback coming from any direct moves to confront the Iranians and Palestinians, Israel would also prefer to have the United States take the lead and do the heavy lifting. To accomplish that, it is first necessary to change Washington’s assessment of the threats in the Middle East, and that just might be doable by arranging something spectacular while the president in the region, like a bombing, or an act of sabotage or even creating what appears to be a terrorist attack. If done properly, whatever occurs would have false flag Iranian and/or Palestinian fingerprints all over it.

To be sure, America’s Secret Service will do a thorough job to protect the president and his entourage, but the Israelis would be operating on their own turf or in their own backyard and would be able to run rings around them. They would also have intimate knowledge of exactly what is being done to protect the American party.

I am not at all suggesting that the Israelis would resort to lethal violence against a group of traveling top level American officials, but I am merely examining what might happen if Prime Minister Naftali Bennett’s government were to get a bit adventurous in an attempt to change the playing field. Bear in mind that Bennett’s government is in trouble. It lost a confidence vote and has called for new elections to be held on October 25th, which could mean a return to power of the truly ghastly Benjamin Netanyahu. What would be better than to stage an international crisis of some kind to rally the Israeli people behind the current government? That would be in addition to creating a mechanism for dealing effectively with the Iranians and Palestinians, which would be very popular among Israeli voters, if an election were to occur.

So, Joe Biden is heading into a crap shoot in the Middle East. Israel will be squeezing him hard and might even do something stupid, while the Saudis have little incentive to give the American president what he wants. The Palestinians meanwhile will wind up abandoned by everyone, once again. But one thing that is for sure is that when Joe returns the spin on how it was a fabulously successful trip will fill the newspapers and airwaves. And then everyone will sit back and hold their breaths to see if that ploy has worked. Come November we will know.

One thought on “Biden Goes to the Middle East”