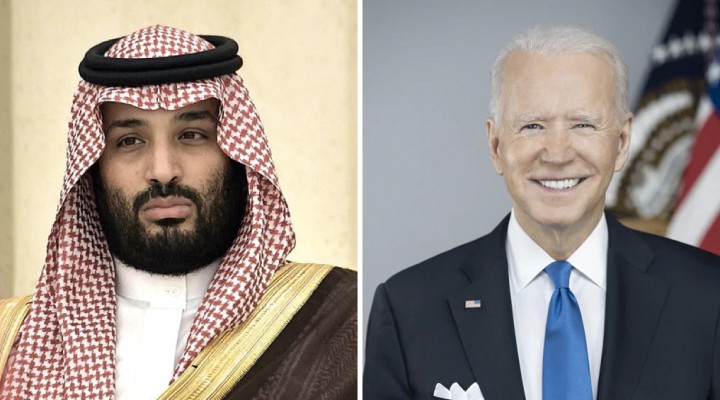 The White House has officially confirmed reports that President Biden will indeed be visiting Saudi Arabia in contradiction of his campaign vows to make the nation a “pariah” for its human rights violations, and everyone’s acting like visiting a murderous tyrant is somehow beneath the dignity of a US president.

“The President will then travel to Jeddah, Saudi Arabia, which is the current chair of the GCC and the venue for this gathering of nine leaders from across the region, at the invitation of King Salman bin Abdulaziz al-Saud,” the White House statement reads. “The President appreciates King Salman’s leadership and his invitation.  He looks forward to this important visit to Saudi Arabia, which has been a strategic partner of the United States for nearly eight decades.”

The president will meet with the nation’s de facto leader, Crown Prince Mohammed Bin Salman, to discuss what the White House calls “means for expanding regional economic and security cooperation, including new and promising infrastructure and climate initiatives, as well as deterring threats from Iran, advancing human rights, and ensuring global energy and food security.”

But what they will primarily be discussing is oil, as the US flounders in its economic war against Russia.

"President Joe Biden will travel to Saudi Arabia in July & is set to meet the country’s de facto ruler, Crown Prince MBS, according to a senior administration official, a trip intended to mend US ties with a nation Biden once promised to make a 'pariah.'"https://t.co/B9oMgdIivB

This visit has ignited a lot of controversy, even in mainstream punditry where criticism of the US empire is only thinly tolerated.

“I wonder who will die because Biden decided to show the world that MBS can kill with impunity,” tweeted Project on Government Oversight’s Walter Shaub in reference to the Saudi leader’s assassination of Washington Post columnist Jamal Khashoggi.

“I don’t understand why it’s necessary to go see MBS,” former presidential advisor David Gergen said on CNN. “Do you want one more big controversy? This one the left will come after him, because they think, the human rights crowd believes very strongly, and with justification, that the murder of Khashoggi rests heavily on MBS and the team around him.”

“His blood stain has not been cleansed,” Senator Tim Kaine told CNN. “And I get it that circumstances change. But what’s the fundamental issue in the world right now? It’s the authoritarians. You know, insistence ‘we’ll do it our way’ versus democratic ideals.”

“I have real worries about patching up relationships with the crown prince absent some real commitments for justice for political dissenters in Saudi Arabia and families that have already been the targets of a dizzying campaign of repression,” Senator Chris Murphy told CNN.

All this hand wringing about a US president visiting a Saudi leader overlooks the fact that the Biden administration openly acknowledges the presence of thousands of US troops in Saudi Arabia, and that the US already actively collaborates with Saudi royalty in myriad ways with immensely far-reaching consequences.

More to the point, though, the controversy over Biden’s meeting with MBS ignores the fact that the US is quantifiably a far more murderous and tyrannical regime than Saudi Arabia.

The United States is currently circling the planet with hundreds of military bases and waging wars which have killed millions and displaced tens of millions just since the turn of this century. Its sanctions and blockades have been starving people to death en masse every single day. It works to destroy any nation which disobeys its dictates by toppling their governments via CIA coups, proxy wars, partial and full-scale invasions, and the most egregious number of election interferences in the entire world.

Saudi Arabia cannot compete with those numbers. Riyadh exerts totalitarian control over its own populace and commits war crimes and funds violent extremists in its immediate surroundings. Washington does all of these things throughout the entire world. It is true that the US exports most of its tyranny and murderousness to other nations (though it certainly exerts plenty of it at home as well), but that only makes it less tyrannical and murderous if you believe non-American lives are worth less than American lives.

Saudi Arabia is not working to dominate the entire planet with an iron fist. Saudi Arabia is not threatening the life of everyone on earth by ramping up nuclear brinkmanship with both Russia and China. Mohammed Bin Salman had someone dismembered with a bone saw. Joe Biden manages a globe-spanning empire that is fueled by human blood.

It’s just so funny how everyone’s arguing about whether the single most murderous and oppressive regime on this planet should be sullying its good name by associating with a far lesser evil than itself. If anything, MBS should be embarrassed to be meeting with a US president.

The US Provides Military Assistance to 73 Percent of World’s Dictatorshipshttps://t.co/RFfxFIRr4S

In truth the US is friends with Saudi Arabia not in spite of the Saudi regime’s murderousness and depravity but exactly because of it. The US doesn’t oppose tyrannical dictatorships; it loves them. A totalitarian monarchy which operates in an immensely geostrategically crucial region with complete control and zero transparency is the most perfect friend a globe-dominating empire could possibly ask for.

If you believe a meeting between Biden and MBS is any kind of transgression of the US government’s values, it’s only because you haven’t looked closely enough and thought hard enough about what those values really are.