HOME / Economy / The wind blows eastwards, the Saudis know it 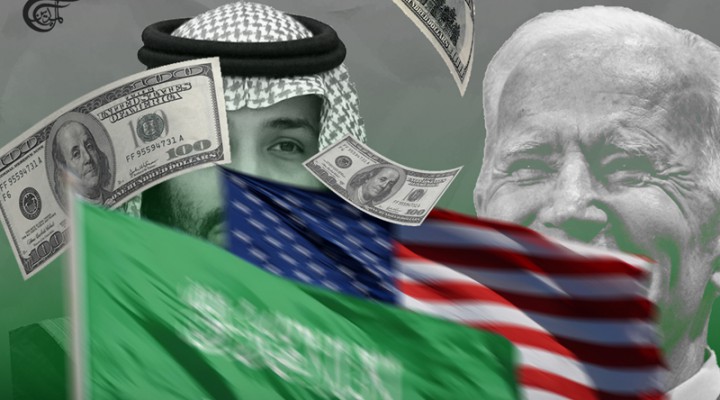 Accelerating inflation is everywhere — that’s obvious. Fiat currencies are sinking in real terms. And commodity-backed currencies that have implicit real value are being sought (i.e. the rouble).

Biden is slated to visit Saudi Arabia sometime in July. However the US administration is clearly feeling the sting following an avalanche of criticism (even from the US mainstream) over his upcoming July trip to the Middle East that will include Saudi Arabia. Clearly, Jamal Khashoggi’s murder remains as painfully sensitive to Biden as a burst blister.

Naturally, the western mainstream assumes the Biden visit is all about sandbagging Saudi and OPEC into opening the spigot on oil supplies for the US, and a desperate Europe.

So Biden will need to return home with at least some tokenism in that respect. Earlier he had tried to downplay the oil price aspect to the trip: “It happens to be a larger meeting taking place in Saudi Arabia. That’s the reason I’m going. And it has to do with national security for them – for Israelis”.  He continued, “I have a program, anyway. It has to do with much larger issues than having to do with the energy price”.

Well… I believe him. It is about “Israel’s” security (sort of). “Israel,” facing lacerating internal divisions at home, will resolve its domestic discontents through an ugly arm-wrestling match deciding which leader is tougher on the ‘Iranian threat’.

This does not mean that there is any ‘clear and present danger’ from Iran (other than predictable Iranian ripostes to Israeli provocations). It is just that Israeli politics ‘is what it is’: The Israeli security services explicitly say that the ‘threat to Israel’ comes from within.  And that is very true. Yet, you do not fight “Israel” elections on an ‘enemy within’ platform: It would be to court civil war.

So, the threat from the ‘Iran pot’ needs re-heating. The dynamics of Israeli politics demand it, as such. Bennet and the Lobby in Washington are busy raising the level of the flames. And Biden must go the region to bang the table on Iran, and to cut the ribbon on another Gulf Security pact which nobody takes very seriously (except for a few Israeli tech businessmen). As a senior former adviser to various Israeli Foreign and Prime Ministers noted last week, “There is no real “Sunni-Israeli coalition,” and talk of an Israeli-Saudi-Emirati front to face Iran is more strategic fiction than a practical reality”.

So what might be the ‘larger issues’ on Biden’s mind?  Not so much oil perhaps, but the US dollar.

Last week saw not just a 0.75% interest rate hike by the Fed, but unexpectedly, even the stolid, ultra-cautious Swiss hiked by 0.50%.

What has this to do with Biden’s trip? Quite a lot. The Swiss move was a big flashing amber light. Indeed, the SNB not only took their key rate closer to positive territory, but underlined that the Swiss Franc is “no longer highly valued”. Because of inflation. The latter implies that the Franc needs to be more highly valued to combat inflation; and that in turn suggests the SNB will be selling, not buying US stocks and other assets (now that the buying of assets isn’t needed to keep the Franc’s value down (the old Swiss headache)).

Accelerating inflation is everywhere — that’s obvious. Fiat currencies are sinking in real terms. And commodity-backed currencies that have implicit real value are being sought (i.e. the rouble).

Same for the dollar: it is ‘no longer so highly valued’ (when set against real assets in an inflationary context).  And if not highly valued, many, many – like the Swiss will be selling US assets – not buying them. So the Fed hikes rates.

This won’t kill US inflation. No chance. But it is probably enough to engender some global dollar demand (the perennial ‘rat run’ to safety).  Whether that is enough, or not, is an open question.

But … the US has $30 TRILLION debt – too – to service, but now at much higher interest rates.  It has to fund that debt servicing requirement by selling US Treasury Bills to the world. But who will buy Treasuries when in real terms they return a nearly negative 10%?

So Biden’s trip is to ask the Saudis to keep buying US Treasuries with their accrued profits arising from high oil prices. For, should the US lose the power of the dollar as global collateral – to commodities as collateral – then its [the American] economy and markets would soon follow.

Biden’s trip is the repeat of the 1974 Kissinger visit to the kingdom: That year, the oil crisis had hit home in the US. An embargo by OPEC’s Arab nations – payback for US military aid to the Israelis during the 1973 War — quadrupled oil prices. Inflation soared, the stock market crashed, and the US economy was in a tailspin.

The then goal was strikingly simple. Find a way to persuade a hostile kingdom to finance America’s widening deficit with its newfound petrodollar wealth.  President Nixon made clear there was simply no coming back empty-handed from the trip. Failure would not only jeopardize America’s financial health, but could also give the Soviet Union an opening to make further inroads into the Arab world.  Plus ça change…?

Times do change: Russia has made energy producers aware of the power of high commodity prices as the basis to future international trading, in lieu of a depreciating (real terms) fiat dollars.  Then, US Treasury Bills were seen to be inviolable: today they can be cast aside as ‘not money good’ upon a whim (i.e. confiscated Afghan government reserve holdings).  Then, US security guarantees seemed plausible; much less so today.  Then NATO was unchallenged; today no more.  Then the geo-political wind still filled the US sails; today those western sails hang flaccid by the masts. The wind blows eastwards. And the Saudis know it.

Will Biden succeed? Indeed, will the trip even take place?

0 thoughts on “The wind blows eastwards, the Saudis know it”