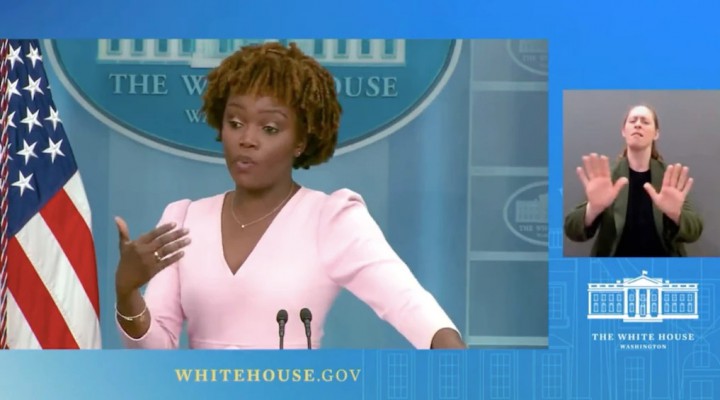 White House Press Secretary Karine Jean-Pierre came very close to committing the cardinal sin of referring to a US-aligned nation as a “regime” on Monday.

“Of course, he will be — they will discuss energy with the Saudi government.”

However, if you watch a video clip highlighted on Twitter by Kawsachun News’ Camila Escalante, you’ll notice Jean-Pierre gets tripped up before the word “government”, with a more accurate transcribing reading something like, “Of course, he will be — they will discuss energy with the Saudi re— uhh, err, government.”

Which is hilarious, because for imperial spinmeisters the word “regime” is traditionally reserved for governments which are not aligned with the US empire, because it suggests that they are undemocratic and authoritarian. The theocratic monarchy of Saudi Arabia is most certainly authoritarian and is the exact opposite of democratic, but because it is aligned with the interests of Washington that pejorative label is typically avoided at the upper echelons of imperial narrative management.

Whether or not a government will be affixed with this label has far less to do with its level of oppressiveness than with whether or not it cooperates with imperial agendas. In a 2018 article titled “A ‘Regime’ Is a Government at Odds With the US Empire,” Fairness and Accuracy in Reporting’s Gregory Shupak explained:

The function of “regime” is to construct the ideological scaffolding for the United States and its partners to attack whatever country has a government described in this manner. According to the mainstream media, the democratically elected government of Nicaragua is a “regime” (Washington Post, 7/11/18). Cuba also has a “regime” (Washington Post, 7/25/18). Iraq and Libya used to have “regimes”—before the United States implemented “regime change.” North Korea most definitely has one (New York Times, 7/26/18), as do China (Washington Post, 8/3/18) and Russia (Wall Street Journal, 7/15/18).

When, for the media, does a government become a “regime”? The answer, broadly speaking: A country’s political leaders are likely to be called a “regime” when they do not follow US dictates, and are less likely to be categorized as such if they cooperate with the empire.

Washington’s economic and military partner Saudi Arabia is described as having a “regime” far less often than is Syria, despite its rather “regime”-like qualities: Its unelected government represses dissidents, including advocates for women and its Shia minority, and carries out executions at an extraordinary clip, including of people accused of adultery, apostasy and witchcraft. Saudi Arabia crushed an uprising in neighboring Bahrain in 2011, and with its US and UK partners, is carrying out an almost apocalyptic war in Yemen.

A ‘Regime’ Is a Government at Odds With the US Empire https://t.co/4hlCM9VGaL pic.twitter.com/DE0ubiquB8

When the empire wants to topple a government, their first step is to psychologically uncouple it from the nation and its people in the eyes of the western world by consistently using labels that make it look like an alien, occupying force. It’s not Venezuela’s government: it’s the Maduro Regime™️.

Oh no! A regime? How did that regime get in where Venezuela’s government ought to be? Watch out Venezuelans, you’ve got a regime on your back! Don’t worry, we’ll come and rescue you from it!

Do you see how it works? If you can make a nation’s government look like an illegitimate invading force instead of the governing body which arose from that nation’s internal dynamics, you legitimize any attempt to “defend” that nation from that force. Up to and including staging coups, arming oppositional militias, airstrikes, sanctions, or full-scale ground invasions.

Which, because it generally cooperates with the US empire, the Biden administration has no interest in doing to Saudi Arabia. Whenever you see a mass media spin piece conducting apologia for the US government’s coziness with Gulf state tyrants, like the recent article in The Atlantic titled “Biden Is Right About Saudi Arabia,” you will see the word “regime” appear exactly zero times.

We saw these ridiculous mental contortions illustrated in particularly hilarious fashion in 2017 when Acting Assistant Secretary of State for Near Eastern Affairs Stuart Jones was asked at a press conference to square the Trump administration’s hand-wringing about the quality of Iranian democracy with its friendliness toward Saudi Arabia. Jones famously paused a full 20 seconds before he could even answer:

You can understand how all this bullshit would be difficult for a rookie press secretary to keep track of. You can be sure that the previous press secretary Jen Psaki would have sailed smoothly from the word “Saudi” to the word “government” without the faintest flicker of conscience, like the cold-blooded reptile she is.

While we’re on the subject, how gross is it that presidential administrations all have their own PR spinmeisters? That’s all a White House press secretary is, you know: someone who works for the White House whose actual job is to manipulate and deceive the public about all the depraved actions of the president.

It is necessary for them to do this because all US presidents must necessarily engage in nefarious behavior as managers of a tyrannical globe-spanning empire, and it is necessary to continuously manipulate and deceive the public about these actions because otherwise they would put a stop to them.

The US government must continuously subvert the will of the people in this way in order to successfully inflict the necessary violence and oppression for maintaining a global empire.

One might even go so far as calling it a regime.