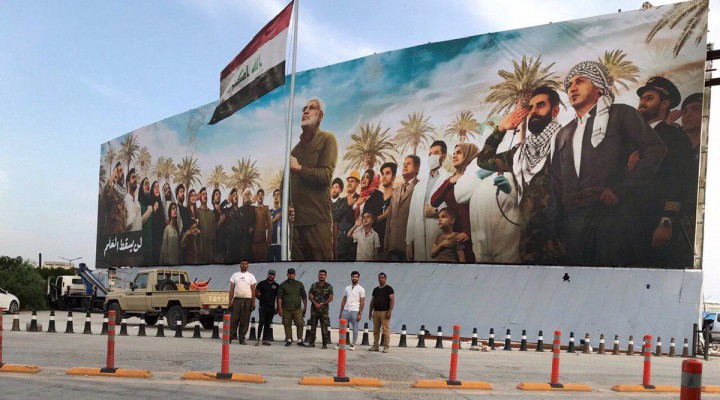 Iraq never before witnessed fragmentation of this magnitude, embodied by an unprecedented division between the various political blocs in a parliamentary system dependent on the consensus of the ruling parliamentary blocs.

The US administration, aware of the lack of Iraqi unity, is playing an important role in pouring oil on the fire. The Iraqi economy depends on sales of crude oil for 67 percent of its budget. Its value is now so low that it threatens the Iraqi economy, and it has become a contributory factor in endangering the integrity of the territory. The deterioration of the standard of living, an unstable infrastructure, the emerging virus COVID-19 with its global economic repercussions- plus the division of parties that want their share in the government of Iraq: all these are effective contributors to the current instability of Iraq.

Interestingly, the US has allocated a financial reward for those who “provide information about the activity of the Hezbollah officials in charge of the Iraq file, Sheikh Muhammad Kawtharani and his allies, and information about his modus operandi.” This is obviously due to his influence in uniting the Iraqi Shiite, Sunni and Kurdish political groups and facilitating the formation of the government. It is clear that the unity of the various Iraqi forces goes against the US interest at this particular moment.

The US administration has multiple projects, including keeping its forces in Iraq. Washington is not willing to comply with the decision of the Iraqi parliament, officially binding, to remove the US forces from Iraq. The US was clearly happy to see the Iraqis lacking consensus and having difficulty in selecting a future prime minister and a new cabinet.

This has been evident on multiple previous occasions, including during the reign of ex-Prime Minister Nuri al-Maliki, when America refused to hand over the weapons that Iraq had paid for in 2014 (when ISIS attacked and controlled a third of the country). Moreover, when Mr Adel Abdul-Mahdi took power in 2018, Washington attacked the Popular Mobilisation Units (PMU), the federal police and the Iraqi army at al-Qaim on the Syrian-Iraqi borders while monitoring the “Islamic State” (ISIS) movement between borders. In addition the US – that controls the airspace over Iraq – allowed Israel to strike weapon stores belonging to the Iraqi security forces and use armed drones against the Iraqi security system on the Iraqi border.Indeed, the US Ambassador to Iraq confirmed to Mr Abdel Mahdi Israel’s direct responsibility in these attacks, which were in clear defiance of Iraqi sovereignty and the terms of the partnership with the US forces based in Iraq.

The US went even further, pushing the region to the edge of war by assassinating the Deputy Leader of the PMU, Abu Mahdi al-Muhandis, and his Iraqi guest, Iranian Major General Qasem Soleimani, at Baghdad Airport.

Following the failure of the election of Adnan al-Zurfi (a close ally of Washington and hostile to Iran) to become Prime Minister, , the US has reacted. Politically, the US is never far from exerting pressure – as it has done in previous years during the selection of Prime Ministership candidates – over its political allies among the Kurds and the Sunni to challenge the new Prime Ministerial candidate. The choice of Mustafa al-Kazemi, the former director of Iraqi intelligence who was appointed by the former pro-American Prime Minister Haider al-Abadi at the time, seems to meet not quite the approval of Washington.

Al-Kazemi managed to obtain the endorsement of most of the Shiite parties not no objection to the names of the ministers he chose. Sayyed Muqtada al-Sadr however insisted on his right to object to the names of the Shiite ministers. As for Washington’s allies, Sunnis and Kurds, they rejected Al-Kazemi’s request to select his own cabinet and insisted on their quotas and the selection of their ministers themselves. Al-Kazemi told his close aides that he considers the move as a US message obstructing his effort to form a government. The US clearly wanted guarantees before it would lift the sword of instability from the neck of Iraq.

Washington blatantly dictated its demands to the Iraqi officials: to rescind all signed agreements with China, disband the PMF by fragmenting its brigades, and integrate these into the existing security apparatus (Ministry of Defence and Interior Ministry). The US wanted its harsh sanctions to be applied on Iran and that Mesopotamia should shut its gates on the “Islamic Republic” to force Tehran to fall into the arms of the US and thereby acknowledge its dominance. Finally, Washington wanted the Iraqi parliament to overturn its previous decision to withdraw US forces from the country, as we have said, a decision taken largely because of the assassination of Abu Mahdi al-Muhandis Major General Qassim Soleimani, at Baghdad Airport.

America relies on the Sunni-Sunni and Shiite-Shiite differences because the chasm has become deep between Iraqi political parties.  According to a decision maker at the Prime Minister’s office, last week, after the election of Mr Kazemi, the US attempted to dictate to Mr Adel Abdul-Mahdi- who categorically refused – that he could remain in power if he fulfilled Washington’s demands (the presence of its forces in Iraq, cancellation of all contracts with China, dismantling the PMF, and joining the sanctions to punish Iran).

Some Shiite parties say that they listen to the advice of the religious authority in Najaf, Sayyed Ali Sistani, that brought down Adel Abdul-Mahdi. Sayyed Sistani’s demand for Mr Abdel Mahdi to resign came following the protestors’ demands of reforms and ending the corruption. The Marjaiya failed to follow up, after bringing down Abdel Mahdi, even if fully aware that the Prime Minister has inherited the corrupted system from the last 15 years of political parties’ dominance and greed.

Whereas the Sunni and Kurdish parties say they want a stake in the new cabinet and that the Marjaiya in Najaf has no authority upon them. The Sunnis are split between the Speaker of Parliament, Muhammad al-Halbousi who wants to appoint, himself, the 6 Sunni ministers (11 for the Shiites, 4 for the Kurds and 2 for the minorities) and thereby leave no space for his ally Khamis Khanjar al-Issawi, head of the “Arab Axis” party. The Kurdish leader Masoud Barzani also requested that Fouad Hussein be kept as finance minister, even though it had been agreed that no minister from the previous government would be appointed to the current government. So, the difficulties facing the new candidate Mustafa al-Kazemi are not to be underestimated.