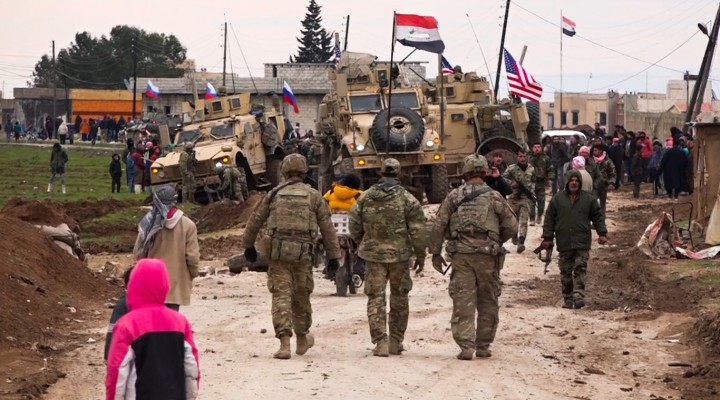 Though today’s incident in Qamishli is a rare occurrence, it is likely a harbinger of the region-wide push that has seen countries like Syria and Iraq take a firmer posture towards the presence of US troops in their countries.

MPN– As resistance to U.S. troop presence in both Iraq and Syria gains steam, a rare scuffle between Syrian civilians and U.S. forces broke out on Wednesday resulting in the death of one Syrian, believed to be a civilian, and the wounding of another. A U.S. soldier was also reportedly injured in the scuffle. The event is likely to escalate tensions, particularly in the Northeastern region where the incident took place, as Syria, Iraq and Iran have pushed for an end to the U.S. troop presence in the region following the killing of Iranian General Qassem Soleimani.

The clash between U.S. forces and Syrian locals took place near the town of Qamishli where the U.S. forces were conducting a patrol that, for reasons that are still unclear, entered into territory controlled by the Syrian government instead of territory occupied by the U.S. and its regional proxy, the Syrian Democratic Forces (SDF). At a Syrian military checkpoint, the U.S. patrol was met by Syrian civilians of a nearby village who gathered at the checkpoint and began throwing rocks at the U.S. convoy. Then, one Syrian took a U.S. flag off of one of the military vehicles.

Reports from activists on the ground and Syrian media then claim that U.S. troops opened fire using live ammunition and fired smoke bombs at the angry residents, killing one and wounding another. A U.S. soldier was said to have received a superficial wound, though the nature of the wound was not specified. After the scuffle, the protests grew larger, preventing more U.S. troops from arriving at the scene. In one video of the protests, a local was seen ripping a U.S. flag as he approached an American soldier.

The obstruction of the road prevented the U.S. patrol from advancing and two military vehicles had to be towed after becoming stuck in the grass after an apparent attempt to circumvent the roadblock created by the Syrian military checkpoint and supportive Syrian civilians.

US forces come under stones attack by local villagers while patrol in #Qamishli #Syria pic.twitter.com/RPtlM8kzf9

The SAA prevented today a US convoy from crossing Khirbet Amo, south Qamishli, and the villagers supported the SAA and threw stones on the US patrol which shot & killed 1 civilian.
In the video, a civilian tells the occupation: "You cannot pass even if there are 100 agreements." pic.twitter.com/I2ehR4k47N

A U.S. military spokesman claimed that the convoy encountered “small-arms fire” from “unknown individuals” and further asserted that “In self-defense, coalition troops returned fire…The situation was de-escalated and is under investigation.” However, critics have pointed out that the U.S. military occupation of Syria is illegal under international law and thus does not afford the U.S. military the ability to act in “self-defense” due to its status as an occupier.

The Syrian Observatory for Human Rights stated in its report on the incident that the situation was de-escalated following the appearance of a Russian military convoy and asserted that the “small-arms fire” was from pro-government militia members who fired into the air near the convoy. The incident also resulted in a few reports of U.S. coalition airstrikes on the village that occurred after the scuffle. However, both Syrian military sources and the U.S. military have denied that airstrikes took place in the area.

Though the incident in Qamishli is a rare occurrence, as nearly all media reports have pointed out, it is likely a harbinger of the region-wide push that has seen countries like Syria and Iraq take a firmer posture towards the presence American forces in their countries following the assassination of Iranian general Qassem Soleimani in January.

At the time of his death, Soleimani, serving in a diplomatic capacity, had traveled to Baghdad in a civilian aircraft and was due to meet Iraq’s Prime Minister to discuss efforts to de-escalate regional tensions and promote Iraqi sovereignty at the time of his death. A well-known Iraqi militia leader, Abu Mahdi Al-Muhandis, who many Iraqis credit with defeating Daesh (ISIS) in Iraq was also killed in the strike. Following the controversial killing of Soleimani by the United States, Iran vowed that it would seek to expel U.S. troops from the region, particularly Syria and Iraq, in retribution, among other measures.

Since Soleimani was killed, the presence of U.S. troops in both Syria and Iraq has been under increasing pressure from locals, particularly in Iraq, where millions of Iraqis recently marched in support of a full U.S. withdrawal from the country.

In Syria, where U.S. troops are occupying territory and specifically oil fields in violation of international law, local tensions with U.S. forces have also been exacerbated by recent events, as Wednesday’s incident in Qamishli clearly shows.

In Iraq, the push to expel U.S. troops has recently spurred reports that have claimed that the withdrawal of U.S. troops from several military installations in Iraq has already begun, according to the chair of Iraq’s parliamentary defense committee, Badr Al-Ziyadi. However, the Pentagon has disputed these reports and has claimed that the U.S. is still actively working with Iraq’s military to fight Daesh. In Syria, both domestic and international law considers the U.S.’ military presence in the country to be that of an illegal occupier.

Notably, both the reports of the U.S. quietly leaving Iraq and the recent incident in Qamishli, Syria follow comments from Iran’s chief foreign policy advisor, Ali Akbar Velayati, that the U.S.’ military presence in both Syria and Iraq would end very soon and specifically cited Soleimani’s assassination as the impetus for their allegedly imminent departure.