HOME / WORLD / Amid the Worse Public Crisis in Decades, Trump Admin Finds the Time and Money to Bomb Iraq 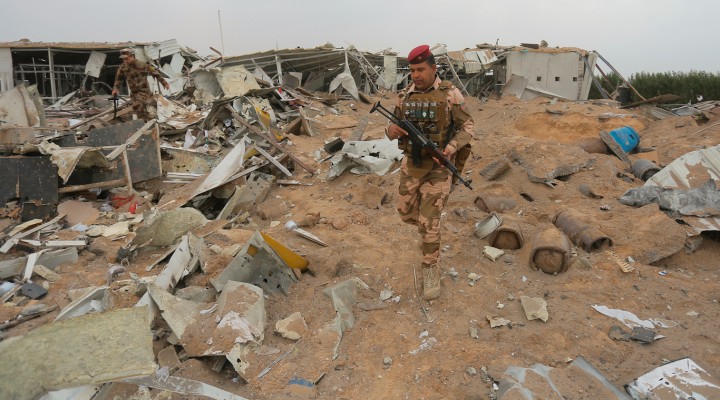 While the government has found plenty of money to carry out wars around the globe (the Trump administration increased the military budget to $934 billion), when it comes to policies protecting public health, money is always apparently lacking.

MPN– Amid a spreading COVID-19 pandemic, the United States government is continuing to ramp up aggression against Iran in lieu of responding to the true threat of disease. Earlier today, the U.S. military launched a number of strikes against five separate targets in Iraq, all of which it alleges are “pro-Iranian” groups. At least six deaths reported. Washington has described the move as retaliation for previous attacks on Western forces. “The United States will not tolerate attacks against our people, our interests, or our allies,” Defence Secretary Mark Esper said. “As we have demonstrated in recent months, we will take any action necessary to protect our forces in Iraq and the region.” The Iraqi government, which has formally requested the United States leave the country, condemned the action.

Iran is reeling from the coronavirus, with over 11,000 confirmed cases and 514 deaths – the most of any country outside of China and Italy. A host of government officials and 23 members of the Iranian parliament have been diagnosed. Yet the U.S. is using their misfortune to further punish and destroy the Islamic Republic.

Iran is suffering from huge shortages of medical supplies, including crucial virus detection kits, precisely because other sovereign nations refuse to sell them to Tehran, fearing reprisals from the Trump administration. Eventually, the World Health Organization was forced to step in and begin sending them directly. Iranian-American blogger Hoda Katebi revealed that her aunt, a doctor in Iran, is even forced to share facemasks with other hospital staff, highlighting the intense shortages the country faces. Because of the sanctions, it is a crime to donate money to Iranian organizations fighting the virus.

In January, MintPress reported that Silicon Valley tech firms had joined the Trump administration’s all-out war against Tehran. The Iranian government recently released an app intended to inform citizens and medical workers about the virus and protect the population from infection. Google, however, following United States law about aiding “terrorist” organizations, duly removed it, noting, “developer accounts from Iran are not allowed on Google Play.”

In January, Trump ordered the assassination of top Iranian general and statesman Qassem Soleimani while he was in Baghdad for peace talks. The U.S. has sent around 2,500 troops to Saudi Arabia and many thousands more to other nations in the region as the buildup of military might continues. Over the vehement protestations of locals, it has also begun to construct three new bases in Iraq, all very close to the Iranian border.

Anti-war group Code Pink are demanding that all sanctions be lifted, writing to the Treasury Department:

Health, hygiene, and access to medical care are fundamental human rights, regardless of race, religion and nationality. For the sake of the health and well-being of 80 million Iranians and their neighbors, we demand that you immediately lift all sanctions on Iran pertaining to healthcare products, medicine, medical laboratory kits, and equipment. In addition, we call on you to lift all the sanctions on Iran, ending the campaign of maximum pressure that is crippling the Iranian economy.

As hundreds of public schools close, *22 million* children who count on their schools for free or reduced-price meals don’t know when they’ll eat next.

I introduced the #MEALSAct to make sure no child goes without food. History will judge us if we don’t pass it immediately. https://t.co/n1ygHm3OG0

While the government has found plenty of money to carry out wars around the globe (the Trump administration increased the military budget to $934 billion), when it comes to policies protecting public health, money is always apparently lacking. At the Democratic debates, moderators have asked candidates 21 questions about how to pay for social programs, but zero about paying for war.

Omar herself is a vocal proponent of emergency legislation to protect the United States from the worst economic and societal decline the coronavirus threatens to bring. On Wednesday, she introduced a provision of a bill that would introduce free virus testing for all Americans, two weeks’ emergency paid sick leave for all, increased funding for Medicaid and guarantee food for poor children during the crisis. “As the country responds to coronavirus, we cannot forget that many Americans could face hardship as a result of some of our preventative measures,” she said. “Twenty-two million children rely on federal subsidized meals. For many kids, it is the only meal they get each day. It is our responsibility to ensure that kids continue to get the meals they need.”

The deep inequalities in American society are harming the country’s ability to respond to the coronavirus effectively. Without universal healthcare, sick Americans face bills of up to $3,500 simply for being tested, while others face financial ruin or homelessness if they miss work self-quarantining. New York City announced it would only close its schools as a “last resort” on the basis that tens of thousands of homeless children have literally nowhere else to go. “History will judge us if we don’t pass [the legislation] immediately,” Omar added.

Although there is a seemingly bottomless pit of money to fund wars abroad or to bail out the rich (yesterday the Federal Reserve injected $1.5 trillion into the stock market, leading to a 15-minute surge), the government moves at a glacier-like pace when it comes to provisions that would help ordinary citizens. President Trump only recently agreed to make coronavirus testing free. Still, only 8,000 Americans have been tested in total, compared to nearly 20,000 per day in South Korea. The arrival of a worldwide pandemic puts into stark contrast what Washington’s priorities really are.

Feature photo | Iraqi army soldiers inspect the destruction from US airstrikes an airport under construction in Karbala, Iraq, March 13, 2020. Five security force members and a civilian were killed early Friday in a barrage of U.S. airstrikes. Anmar Khalil | AP

0 thoughts on “Amid the Worse Public Crisis in Decades, Trump Admin Finds the Time and Money to Bomb Iraq”