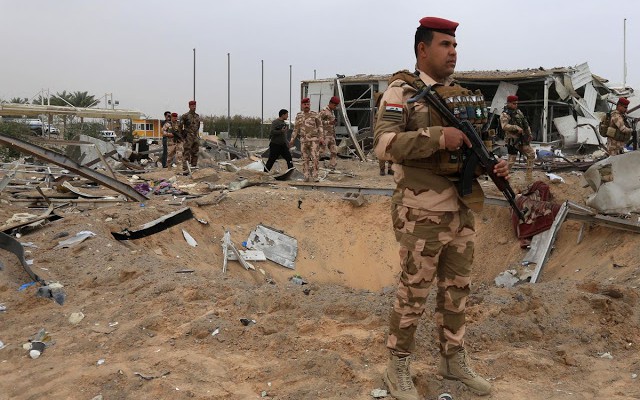 The US has recently carried out deadly attacks across Iraq – targeting Iraqi state-sponsored militias including Kata’ib Hezbollah who were responsible for the defeat of the so-called Islamic State in Iraq and Syria (ISIS).

CNN in its article, “US conducts airstrikes against multiple Iranian-backed militia sites in Iraq,” would report:

The US carried out airstrikes on Thursday against multiple Iranian-backed militia sites in Iraq, according to the US Defense Department.

The strikes come one day after the US assessed an Iranian-backed group was responsible for a rocket attack on a base where coalition forces are located, killing two American service members and one British service member.

CNN and other Western corporate media outlets have attempted to depict militias like Kata’ib Hezbollah as “Iranian-backed” in an effort to demonize them – and while they are indeed partly backed by Iran – they are also an official component of the Iraqi military.

Newsweek itself in a 2018 article titled, “U.S. Soldiers Under Threat as Iran Allies Join Iraq Military with Plans to Kick Americans Out,” admitted:

An Iran-backed collective of mostly Shiite Muslim militias was officially made part of the Iraqi military Thursday, a development that placed U.S. forces in a difficult position as Washington tried to pull Baghdad away from its close ties to Tehran.

The article would also note:

Iraqi Prime Minister Haider al-Abadi issued “regulations to adapt the situation of the Popular Mobilization fighters” on Thursday, giving them ranks and salaries equivalent to other branches of the Iraqi military.

Newsweek attempts to depict the development as sinister and the result of Iranian machinations.

Nowhere mentioned by Newsweek is the fact that America’s presence in Iraq in the first place was the result of a deliberate lie to justify an illegal and deadly war as well as the subsequent now nearly 20 year US military occupation of Iraq.

While Newsweek attempts to claim it is Iran’s goal to oust US troops from Iraq – US troops that have no business or legal ground to be there in the first place – it was the Iraqi parliament itself which recently voted to expel US troops from Iraqi territory – not Tehran.

Parliament has voted to ask the government to end an agreement to host US troops in Iraq. The move would oust all foreign soldiers, including those from Germany.

DW – in a follow up article titled, “US rejects Iraqi parliament’s call to withdraw troops,” would report:

Washington and Baghdad should not discuss troop withdrawal, the US State Department has said, refusing parliament’s request for US soldiers to leave.

While Washington claims its military invasion and occupation of Iraq was predicated on fighting terrorism and promoting democracy – it now finds itself openly bombing militias who played a key role in defeating terrorists like ISIS and flagrantly dismissing Iraq’s democratically elected parliament and their demands that US troops leave their territory.

Iraq’s Right to Defend Itself Against Illegal Invaders

This is precisely what is being done to US forces illegally occupying Iraqi territory and refusing to leave.

Their bases are under attack for their refusal to heed Iraqi demands to leave. In response to the attacks – the US claims it must defend its illegal and unwanted occupation through direct military intervention against militias officially augmenting Iraq’s armed forces.

The pretext for America’s continued presence in Iraq – beyond naked imperialism – has become increasingly murky.

US forces have claimed they remain in Iraq to underwrite Iraq’s security – but with the US now bombing Iraq’s own security forces – it is clear that the US itself poses as a- if not the greatest – threat to Iraqi security, stability, and national sovereignty.

The impotence of the UN and other supposed “international” institutions once again showcases the weakness and irrelevance – or perhaps the singular self-serving nature of the current US-led “international order.”

It will instead be through a combination of continued political and military pressure targeting America’s illegal military presence in Iraq, the continued creation of economic alternatives to circumvent US sanctions on both Iraq and Iran, and the entire region’s attempts to build constructive ties with China and Russia to displace America’s disruptive presence which will finally and fully underwrite genuine security and sovereignty for targeted nations like Iraq.

Since 2003 – the Iraqi people have suffered war, occupation, terrorism, and now open contempt by the West. The Iraqi people – like all people – yearn for basic stability within which to build better lives and will work with anyone who can offer it – and against anyone who threatens it.

Thus the US’ battle against groups like Kata’ib Hezbollah who helped restore stability to Iraq in the face of the ISIS threat – is a battle against the will of the Iraqi people themselves. It is an unsustainable battle the US will ultimately lose – and along with it – additional credibility and opportunities within the international arena to nations committed to the primacy of national sovereignty and the concept of multipolarism.