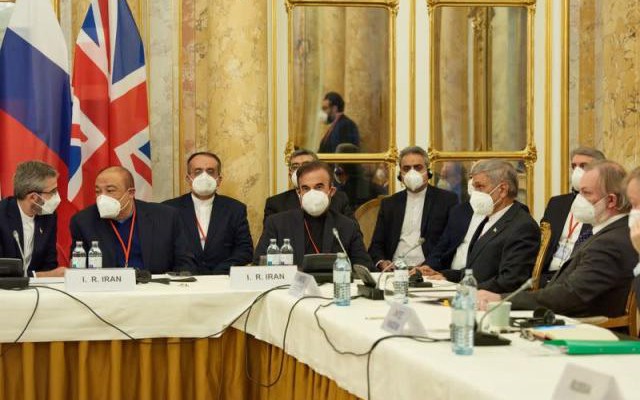 Despite the bluster, Iran has the upper hand as Vienna talks resume

Threats by Israeli generals to “send Iran back to the stone age” if it doesn’t abandon its nuclear and missile programmes and its regional paramilitary allies reflect Israel’s extreme anxiety about the resumption of negotiations in Vienna between Iran and the big-power P5+1 group on reviving the JCPOA nuclear agreement.

Israel could end up the big loser whatever the outcome of the talks: whether a deal is reached, resulting in the lifting of sanctions against Iran and the influx of billions of dollars into its economy for minimal concessions, or whether the negotiations collapse. In the worst-case scenario, this could trigger a war which Iranian commanders have repeatedly threatened would not merely send Israel ‘back to the stone age’ but wipe it out entirely because thousands of missiles of all ranges and sizes would inundate it from all sides.

It is to avoid the same fate that Saudi Arabia, no longer trusting in its US ally’s protection, sent its intelligence chief Khalid al-Humaidan to Baghdad four times to seek negotiations with Iran.

According to the head of the Iranian team in Vienna, Ali Baqeri Kani, Iran is not there to negotiate about its nuclear programme but to reach an economic deal under which all US sanctions are lifted. It insists that Washington take the first step in this regard and provide guarantees that sanctions will not be reimposed by a future administration, whether under Donald Trump or anyone else. This is a debilitating condition that can only be issued from a position of strength.

Setting aside much of the ‘expert’ analysis that has been published about this issue since the first round of negotiations began nearly two years ago, we should focus on a few key points:

–First: Iran has so far refused to sit down directly with the US delegation for face-to-face talks. ‘Biden’s America’ has accepted this condition, and the position is unlikely to change in the next few days unless the US commits to a full lifting of sanctions.

–Second: The resumption of negotiations means Israel has failed to achieve its goal of drawing the US into a war with Iran — though Washington knows the Iranian side has been playing for time to develop its nuclear programme and increase its uranium enrichment rates.

–Third: Iran is now being run by Ebrahim Raisi, a ‘revolutionary’ president close to the Supreme Leader who can’t forgive his ‘moderate’ predecessors for wasting five years in talks that led to a futile and counterproductive deal from which the US withdrew under Israeli pressure.

–Fourth: Iran today is in a position of military and political ascendancy. It has managed to absorb most of the effects of sanctions and according to the US itself has managed to become a nuclear ‘threshold’ state. No interim or comprehensive deal will change that.

–Fifth: By barring the International Atomic Energy Agency (IAEA) from inspecting nuclear facilities or obtaining CCTV footage of them, Iran is signalling it is a sovereign state that fears no threats and makes its own decisions.

–Sixth: US and Israeli military muscle-flexing has so far only backfired. It has not prompted the Iranian side to soften its hard-line stance in the negotiations, but quite the opposite. The same goes for the decade or more of incessant Israeli threats to attack Iran.

It is not a matter of whether the Vienna talks will succeed or fail, but of which side can impose its terms — Iran or the US — and which will back down. Judging by the previous six rounds of talks, and given latest developments in the region, the US is unlikely to win the seventh.

Israel dragged the US into this predicament in the belief that it could lure it into war with Iran, relying on Trump’s stupidity and recklessness and its control over his son-in-law Jared Kushner. But it is hard to believe it can be snared in the deadly trap of war this time even if the negotiations fail. The US was the party that reneged on the original agreement, while Iran remained largely compliant, and the onus is on it to make amends (even though its withdrawal turned out to be an unintended Israeli gift to Iran).

Iran is in a position of strength. Its greatest asset is its ability to stand firm, make decisions, and rely on its self-developed defence capability and its steadfast allies in Lebanon, Iraq, Yemen and the occupied Gaza Strip. The US, for its part, was defeated in Afghanistan and its allies have learned many lessons from that humiliating defeat. It is no longer the omnipotent superpower. Israel’s anxiety reflects this. Both it and its newfound normalising Arab partners know the US is not going to go to war for their sake.

One thought on “Israel, Iran and the stone age”