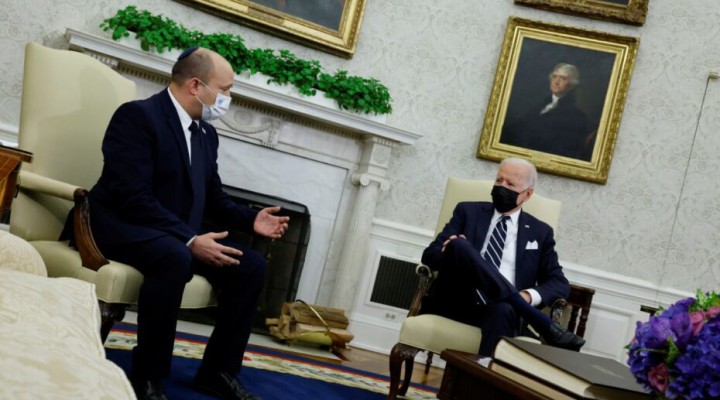 The U.S. will be seen as endorsing the crime, resulting in yet another foreign policy disaster in the Middle East war, Philip Giraldi writes.

Some might recall candidate Joe Biden’s pledge to work to rejoin the Joint Comprehensive Plan of Action (JCPOA) which was a multilateral agreement intended to limit Iran’s ability to develop a nuclear weapon. The JCPOA was signed by President Barack Obama in 2015, when Biden was Vice President, and was considered one of the only foreign policy successes of his eight years in office. Other signatories to it were Britain, China, Germany, France, and Russia and it was endorsed by the United Nations. The agreement included unannounced inspections of Iranian nuclear facilities by the IAEA and, by all accounts, it was working and was a non-proliferation success story. In return for its cooperation Iran was to receive its considerable assets frozen in banks in the United States and was also to be relieved of the sanctions that had been placed on it by Washington and other governments.

The JCPOA crashed and burned in 2018 when President Donald Trump ordered U.S. withdrawal from the agreement, claiming that Iran was cheating and would surely move to develop a nuclear weapon as soon as the first phase of the agreement was completed. Trump, whose ignorance on Iran and other international issues was profound, had surrounded himself with a totally Zionist foreign policy team, including members of his own family, and had bought fully into the arguments being made by Israel as well as by Israel Lobby predominantly Jewish groups to include the Foundation for Defense of Democracies (FDD) and the American Israel Public Affairs Committee (AIPAC). Trump’s time in office was spent pandering to Israel in every conceivable way, to include recognizing Jerusalem as the country’s capital, granting Israel the green light for creating and expanding illegal settlements on the West Bank and recognizing the occupied Syrian Golan Heights as part of Israel.

Given Trump’s record, most particularly the senseless and against-American-interests abandonment of JCPOA, it almost seemed a breath of fresh air to hear Biden’s fractured English as he committed his administration to doing what he could to rejoin the other countries who were still trying to make the agreement work. After Biden was actually elected, more or less, he and his Secretary of State Tony Blinken clarified what the U.S. would seek to do to “fix” the agreement by making it stronger in some key areas that had not been part of the original document.

Iran for its part insisted that the agreement did not need any additional caveats and should be a return to the status quo ante, particularly when Blinken and his team made clear that they were thinking of a ban on Iranian ballistic missile development as well as negotiations to end Tehran’s alleged “interference” in the politics of the region. The interference presumably referred to Iranian support of the Palestinians as well as its role in Syria and Yemen, all of which had earned the hostility of American “friends” Israel and Saudi Arabia.

Israel inevitably stirred the pot by sending a stream of senior officials, to include Foreign Minister Yair Lapid, Defense Minister Benny Gantz and Prime Minister Naftali Bennett to discuss “the Iranian threat” with Biden and his top officials. Lapid made clear that Israel “reserves the right to act at any given moment, in any way… We know there are moments when nations must use force to protect the world from evil.” And to be sure, Biden, like Trump, has also made his true sentiments clear by surrounding himself with Zionists. Blinken, Wendy Sherman and Victoria Nuland have filled the three top slots at State Department, all are Jewish and all strong on Israel. Nuland is a leading neocon. And pending is the appointment of Barbara Leaf, who has been nominated Assistant Secretary to head the State Department’s Near East region. She is currently the Ruth and Sid Lapidus Fellow at the Washington Institute for Near East Policy (WINEP), which is an AIPAC spin off and a major component in the Israel Lobby. That means that a member in good standing of the Israel Lobby would serve as the State Department official overseeing American policy in the Middle East.

At the Pentagon one finds a malleable General Mark Milley, always happy to meet his Israeli counterparts, and Secretary of Defense Lloyd Austin, an affirmative action promotion who likewise has become adept at parroting the line “Israel has a right to defend itself.” And need one mention ardent self-declared Zionists at the top level of the Democratic Party, to include Biden himself, Speaker of the House Nancy Pelosi, House Majority Leader Steny Hoyer and, of course, Senate Majority Leader Chuck Schumer?

So rejoining the JCPOA over Israel objections was a non-starter from the beginning and was probably only mooted to make Trump look bad. Indirect talks including both Iran and the U.S. technically have continued in Vienna, though they have been stalled since the end of June. Trita Parsi has recently learned that Iran sought to make a breakthrough for an agreement by seeking a White House commitment to stick with the plan as long as Biden remains in office. Biden and Blinken refused and Blinken has recently confirmed that a new deal is unlikely, saying “time is running out.”

And there have been some other new developments. Israeli officials have been warning for over twenty years that Iran is only one year away from having its own nukes and needs to be stopped, a claim that has begun to sound like a religious mantra repeated over and over, but now they are actually funding the armaments that will be needed to do the job. Israel Defense Force Chief of Staff Aviv Kohavi has repeatedly said the IDF is “accelerating” plans to strike Iran, and Israeli politicians to include former Prime Minister Benjamin Netanyahu have regularly been threatening to do whatever must be done to deal with the threat from the Islamic Republic. Israeli media is reporting that $1.5 billion has been allocated in the current and upcoming budget to buy the American bunker buster bombs that will be needed to destroy the Iranian reactor at Bushehr and its underground research facilities at Natanz.

In the wake of the news about the war funding, there have also been reports that the Israeli Air Force is engaging in what is being described as “intense” drills to simulate attacking Iranian nuclear facilities. After Israel obtains the 5000 pound bunker buster bombs, it will also need to procure bombers to drop the ordnance, and one suspects that the U.S. Congress will somehow come up with the necessary “military aid” to make that happen. Tony Blinken has also made clear that the Administration knows what Israel is planning and approves. He met with Israeli Foreign Minister Yair Lapid on October 13th and said if diplomacy with Iran fails, the U.S. will turn to “other options.” And yes, he followed that up with the venerable line that “Israel has the right to defend itself and we strongly support that proposition.”

Lapid confirmed that one of Blinken’s “options” was military action. “I would like to start by repeating what the Secretary of State just said.  Yes, other options are going to be on the table if diplomacy fails.  And by saying other options, I think everybody understands here … what is it that we mean.” It must be observed that in their discussion of Iran’s nuclear program, Lapid and Blinnken were endorsing an illegal and unprovoked attack to prevent Iran from acquiring a nuclear weapon that it is apparently not seeking, but which it will surely turn to as a consequence if only to defend itself in the future.

In short, U.S. foreign policy is yet again being held hostage by Israel. The White House position is clearly and absurdly that an Israeli attack on Iran, considered a war crime by most, is an act of self-defense. However it turns out, the U.S. will be seen as endorsing the crime and will inevitably be implicated in it, undoubtedly resulting in yet another foreign policy disaster in the Middle East with nothing but grief for the American people.  The simple truth is that Iran has neither threatened nor attacked Israel. Given that, there is nothing defensive about the actions Israel has already taken in sabotaging Iranian facilities and assassinating scientists, and there would be nothing defensive about direct military attacks either with or without U.S. assistance on Iranian soil. If Israel chooses to play the fool it is on them and their leaders. The United States does not have a horse in this race and should butt out, but one doubts if a White House and Congress, firmly controlled by Zionist forces, have either the wisdom or the courage to cut the tie that binds with the Jewish state.

0 thoughts on “Israel to Attack Iran? Washington Gives the Green Light to the ‘Military Option’”