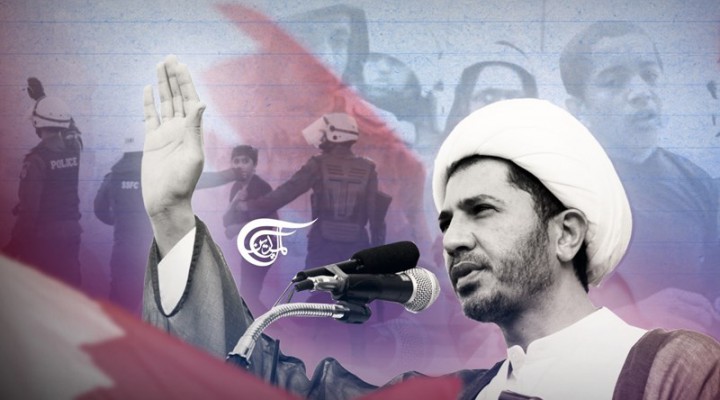 Al-Wefaq and Wa’ad had been the main two opposition political groups and were dissolved over charges of having links to ‘terrorism’.

In the land of wonders, where there is neither law nor conscience speaks, only the rhetoric of oppression prevails. Whenever you dare to dream of freedom, you will turn into a criminal terrorist; fabricated charges will be brought against you; facts will be falsified, and events will be made-up to persecute you.

It is Bahrain, and in one of its most notorious prisons, the symbol of peace, dialogue, and unity, His Eminence Sheikh Ali Salman, the prominent opposition leader, is arbitrarily held. Sheikh Ali is detained there merely because he ‘committed the crime’ of demanding the rights of his oppressed people, and because he was keen on the peacefulness of the popular uprising, at a time when terrorists were driven to Syria to murder its people.

Meanwhile, seven years have gloomily passed. His eldest son has got married, his two beautiful daughters Nabaa and Sarah have grown up, and his family misses him on each and every occasion.

Sheikh Ali is absent from his people, while criminals have wreaked havoc in the country, whose citizens have turned into strangers. On the contrary, the Zionists, with all their insolence, move freely after they have distorted the brilliant history of this anti-imperialist country through the ominous normalization of ties, which would be engraved forever in the memory of the Bahrainis, the supporters of Palestine and its just cause.

The Secretary-General of the now-outlawed Al-Wefaq National Islamic Society, Bahrain’s top opposition political group, has been incarnated since December 2014. He was initially sentenced to four years in prison for allegedly “inciting disobedience and hatred”.

The sentence has been widely dismissed as an act of political revenge and has been labeled, by the United Nations, as a “breach of his fundamental human rights”.

The Bahraini High Court of First Tier acquitted Sheikh Salman on 21 June 2018. Then, the Court of Appeal overturned the acquittal, on 4 November 2018, handing him a life sentence after finding him guilty of spying for Qatar “to transfer confidential information in exchange for financial compensation”.

The politically-motivated charges stemmed from an open and well-documented mediation, in the aftermath of the 2011 pro-democracy uprising, which resulted in preliminary communications between Manama, Doha, and the Bahraini opposition. However, since the imposed blockade on Qatar, by Saudi Arabia and the U.A.E., Manama manipulated the diplomatic row to intensify its clampdown against any critical voices.

Seen as part of the boycott to what they call “extremist policies”, allegations Doha vigorously denied, Sheikh Salman’s trial shifted to an intelligence-sharing case, relating to a clipped audio recording of a telephone call with Qatar’s former Prime Minister.

The incomplete clip was made in 2011, as part of mediation between Manama and the opposition, overseen and encouraged by the US, to deal with the political upheaval, i.e. it dates back to several years ago. The edited clip was thus smeared by the Bahraini government to prolong the imprisonment of Sheikh Salman, merely because he long called for democratic reforms including a constitutional monarchy and elected prime minister.

On Jan 28, 2019, Bahrain’s Court of Cassation condemned Sheikh Ali and the other two to life imprisonment. The two co-defendants, Hassan Sultan, and Ali al-Aswad are leading Bahraini opposition figures and were tried in absentia.

Al-Wefaq said the verdict is based on “fabrications and fraud”, and it makes a “mockery” of Bahrain’s judiciary. The now-outlawed political group vowed that these measures would not bring about an end to its movement calling for democratic reforms.

Al-Wefaq and Wa’ad had been the main two opposition political groups and were dissolved over charges of having links to ‘terrorism’.

Amnesty International’s Middle East Campaigns Director, Samah Hadid, stated that the verdict underscores Manama’s “determination to silence critical voices”, adding it is yet “another nail in the coffin for the right to freedom of expression in Bahrain and exposes the country’s justice system as a complete farce”.

Although freedom of expression is a ratified constitutional right; yet it constitutes a heinous crime and poses an existential threat to the Manama regime.

Undeniably, the persecution of this peaceful leader is related to his commitment to peaceful protest and anti-corruption, marginalization, and monopolization of power policies.

Targeting peaceful dissidents has become the norm in Bahrain and undermines any chance for political dialogue or inclusive reconciliation. In addition, the increasingly restricted political space and human rights violations have become highly dire.

Sheikh Ali Salman has long been targeted by the authority in Bahrain, as he was tortured and detained for months without trial, in 1994, before being deported and exiled for more than 15 years. The cleric is a charismatic leader and has been a vocal advocate of peaceful protests. He is deemed as a moderate dissent demanding constitutional reforms, unlike hardline groups who demand the toppling of the regime.

Bahrain hosts the US Navy’s 5th fleet and a UK permanent base. Those two powerful allies; however, have blatantly failed to speak out about the deteriorating human rights status-quo, ongoing crackdown on prisoners of conscience, and the politically motivated conviction and unlawful imprisonment of Sheikh Ali Salman and the rest of opposition leaders.

The pro-democracy uprising had erupted in February 2011 but was violently suppressed by Saudi troops. Ever since, the tiny archipelago has been wracked by unrest as the government has stepped up its prosecution campaign against all forms of peaceful opposition demanding reforms, freedom of expression, the release of political prisoners, and putting an end to the politically-motivated discrimination against the Shiite majority population.

The government has curbed the rights to freedom of association and assembly, outlawed opposition groups, detained thousands of dissents, provoked the citizenship of hundreds, and unfairly prosecuted citizens in military courts, accompanied by a wide range of physical, sexual, and psychological torture and ill-treatment.