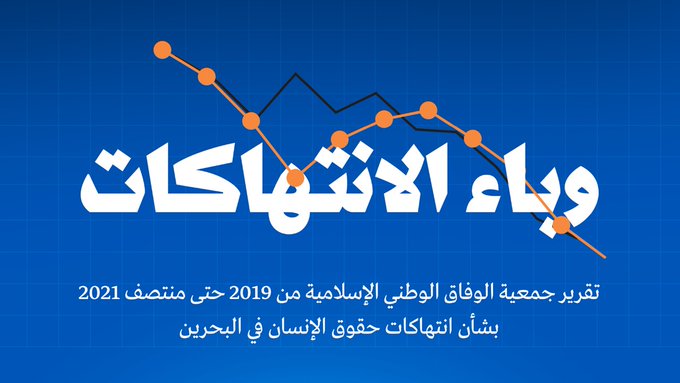 Exclusive-  Bahrain’s top opposition bloc al-Wefaq has launched its annual report on human rights violations in Bahrain, between 2019 and mid-2021, entitled: “The Epidemic of Violations”

The report emphasizes that state-oriented violations have escalated during the past decade, while the reforming popular movement has continued to demand fundamental rights guaranteed and regulated by the constitution.

Among these abuses, documented by Al-Wefaq: Arbitrary arrests, raids, enforced disappearance, torture, ill-treatment, confiscation of rights, sabotage and confiscation of property, and detention for expressing an opinion or public criticism through the media, in violation of the local and international laws.

The essence of Bahrain’s popular movement, the report stresses, is the rampant discrimination in terms of citizenship and rights, as there are first-degree citizens, second-class citizens, and third-degree citizens.

Besides, political naturalization in the country has sought to overturn the existing demographic structure in addition to perpetuate discrimination in the social, economic, academic, service, health and other aspects of life.

Al-Wefaq’s report depicts tip of the iceberg of the miserable status Bahrain has reached, politically, judicially and legally. The opposition bloc deems the report a modest attempt to reflect on the reality of injustice, persecution and lack of justice over decades of tyrannical rule in the country.

Further, the report’s tables show to what extent judicial rulings have become regular in the country, against citizens charged by the security services. For instance, the number of years of conviction in 2019 reached 7,456 years and 8 months, and 1,755 years and 10 months in 2020.

Many citizens are subjected to enforced disappearance, whereby the suspected is forcibly disappeared by the authorities for days or weeks in an unknown place and location, without informing his family in violation of the law, according to the report.

It further adds that prisoners of conscience in Bahrain are subjected to ill-treatment, harassment, and confiscation of their rights, such as medical negligence, deprivation of phone calls and visits, or personal security in the detention centres.

Al-Wefaq’s report also monitors violations against family members during raids and how the property are confiscated.

Although Bahrain is not a party to the International Convention for the Protection of All Persons from Enforced Disappearance, the United Nations Declaration on the Protection of All Persons from Disappearance states that this violation is a crime against human dignity, a denial of the purposes of the UN Charter and a grave violation of the freedoms enshrined in the Universal Declaration of Human Rights, the report states.

Al-Wefaq’s report adds that many cases of restrictions on religious freedoms have been documented, where detainees were subjected to ill-treatment or torture because of their practice of religious rites or as a result of claiming the right to practice them.