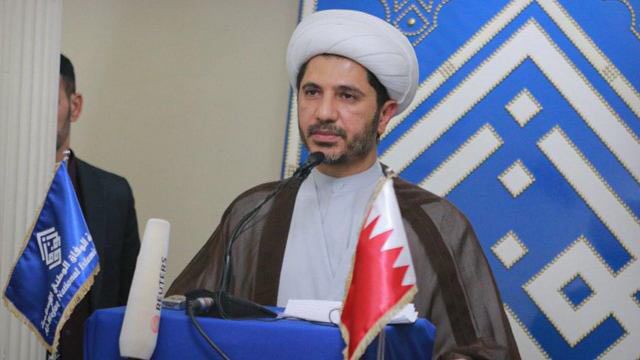 Exclusive- Sheikh Ali Salman, leader of the now-outlawed Al Wefaq, Bahrain’s top opposition group, embarks on his 7th year of systematic persecution as a prisoner of conscience in the Bahraini notorious prison of Jaw merely for peacefully exercising his right to freedom of expression and for demanding democratic reforms, including a constitutional monarchy and an elected prime minister. Those demands; however, are deemed by Manama as criminal charges of “inciting hatred and insulting public institutions”.

In November 2018, Bahrain’s High Criminal Court of Appeal overturned an acquittal granted to him, and blatantly sentenced the leader, along with fellow opposition leaders, Sheikh Hassan Sultan and former MP Ali al-Aswad, to life in prison, accusing them of scheming with the state of Qatar “to overthrow the regime”.

Responding to the arbitrary verdict, Amnesty International commented that it is “a travesty of justice” that demonstrates the Bahraini government’s “relentless efforts to silence any form of dissent”.

For its part, Al Wefaq political bloc, which Sheikh Ali Salman leads, slammed the verdict saying it is “unacceptable and provocative” ruling and would worsen the political crisis.

Remarkably, the espionage accusation just arose as an issue in the aftermath of the diplomatic row with the Qatari regime, in 2017, as it dates back to a 2011 clip of a phone call aimed to mediate between the Bahraini government and opposition parties then.

Bahrain’s Independent Commission of Inquiry’s report, aka BICI report, cites opposition sources suggesting that Qatar, then, could act as the sponsor of a proposed US initiative, and which was approved by the opposition but rejected by the government.

The tiny Gulf archipelago has been wracked by unrest since February 2011, when thousands of citizens kicked off to the streets of Manama demanding justice, democracy and equal opportunities.

Nevertheless, the peaceful demonstrators were violently suppressed, with the assistance of neighboring countries’ troops, especially from Saudi Arabia. Ever since assembly has been outlawed, opposition groups have been dissolved and dissents have been either jailed, denaturalized or exiled.

The BICI, also known locally as the Bassiouni Commission, was established by the King of Bahrain, tasked with looking into the incidents that occurred during the 2011 unrest.

In November 2011, the commission released a detailed report, which criticizes Bahrain’s security forces for using “excessive manner that was, on many occasions, unnecessary, disproportionate, and indiscriminate” and which “could not have happened without the knowledge of higher echelons of the command structure.” The BICI report further confirms the government’s use of systematic torture and other forms of physical and psychological abuse on detainees, as well as other human rights violations.

Sheikh Salman, along with hundreds of human rights advocates, top opposition leaders and prisoners of conscience, are currently held in the notorious Jaw Prison, known for its inhumane and unsanitary environment that infringes the Standard Minimum Rules for the Treatment of Prisoners (SMR), aka ‘Nelson Mandela Rules’ in honor of  the legacy of the late President of South Africa.

After seven years of arbitrary detention, to which the international community appallingly turns blind eyes and deaf ears, it is time that the Bahraini government immediately and unconditionally release Sheikh Ali Salman, who is obviously convicted on politically-motivated charges.