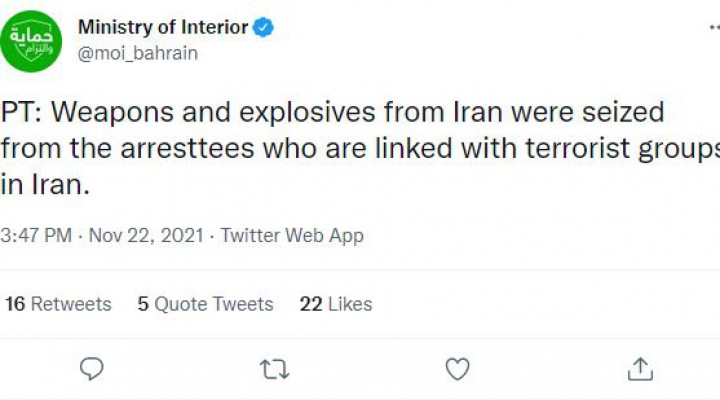 Exclusive– Lying is a hateful and accursed vice, which resembles the cowardice and the lack of conscience of the McCarthyite Bahraini regime. It reveals nothing but its inferiority complex; indeed, there is nothing impossible with this rude regime and its charlatanism.

Yesterday, Reuters reported that “Bahrain security forces arrested a number of suspected militants ahead of a planned attack and confiscated weapons and explosives that had come from Iran”.

Many commenters have compared this unembarrassed lying to the “big lies” of the great dictatorships of the last century, prompting the simple questions: “How can explosives be transferred to a tiny island like Bahrain, home to U.S. Naval Forces Central Command and the U.S. 5th Fleet?”

For decades, Manama has employed an uncontested narrative of events in order to silence the opposition.

These lies and pre-fabricated or already know accusations are obviously at odds with the facts on ground, and they reveal the authoritarian regime’s systematic campaign to distort the peaceful popular movement demanding democratic transition, social justice and freedom.

Since the onset of the peaceful movement in 2011, the opposition has occasionally made clear that it stands against any level of violence.

The opposition has steadily adopted the non-violence approach as the core of it pro-democracy nonstop struggle, stressing that escaping the origins of Bahrain’s crisis will change nothing, as the vast majority believe in the necessity of a comprehensive change, which guarantees real participation of all citizens in managing their internal affairs, equally and effectively.

In all his speeches and comments, the detained Secretary General of Bahrain’s top opposition bloc Al-Wefaq, Sheikh Ali Salman has recurrently stressed that the Bahraini people, who offered dear sacrifices to their homeland, will not abandon their rightful demands, and that there has been no more peaceful uprising like the Bahraini one.

Undoubtedly, Manama’s fabrications remind us of the most famous lie of September 10th, which was fabricated in order to justify the invasion of Iraq and Afghanistan.

So, Bahrain is following the same pattern and has gone too far to the limit that even its Western allies could no longer tolerate these lies.

In the aftermath of the peaceful 2011 uprising, the Ministry of Interior provided the state-controlled media with fabricated sectarian narratives that the opposition targets the Sunni component, not the regime, and that it aims to deport, marginalize, and exclude them, plunder its rights, and monopolize power, and that the protest movement is a scheme that operates according to a foreign conspiracy aimed at destabilizing the country.

Bahrain’s Interior Ministry has persistently harnessed its entire capabilities in order to render the validity of such false narratives. However, only few brainwashed pro-regime or politically-naturalized in Bahrain believe these deliberate fabrications.

Proclaiming ready-made accusations reveals the regime’s vicious intentions to exploit such incidents to again escape the national democratic entitlements of the Bahraini people.