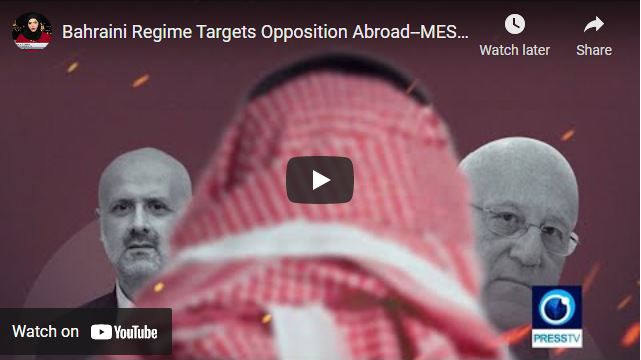 Lebanese Minister of Interior, Bassam Mawlawi, requested, in a letter he sent last week to the General Directorate of Public Security, that all measures be taken to “deport non-Lebanese members of the Bahraini Al-Wefaq Society out of Lebanon.

” Well -please act surprised- but the Minister of Interior’s decision came after a phone call he received from his Bahraini counterpart, Rashid bin Abdullah Al Khalifa, in which they discussed ” the press conference held in Beirut.

Apparently the Al Khalifah regime in Bahrain were insulted by Al-Wefaq’s human rights report published in Beirut, accusing Bahrain of arresting thousands of nationals “arbitrarily”, including hundreds of women and children, issuing hundreds of “politicized” sentences, and torturing hundreds of detainees. Now can you see why the Bahraini tyrannical regime felt a bit –umm what’s the word- exposed?!

To discuss this issue with us from London is Ali Al Fayez Bahraini human rights activist.

Despite the attempt by the forces loyal to the Saudi-Emirati coalition of aggression, following the withdrawal of the militias backed by Abu Dhabi from the areas south of Hodeidah, to regain the grounds of the western coast, and to achieve breakthroughs in oil-rich Marib, the counterattack launched by the Sana’a forces, dispersed all the mercenaries.

This sparked widespread condemnation among activists loyal to the “coalition of aggression”, who accused the latter of betraying its forces. Meanwhile, Saudi Arabia is running from one western power to the other to buy more weapons trying to compensate their successive losses unable to fathom that they have completely lost Marib. You see, Ansarullah’s control of Ma’rib would not only remodel the balance of power on the ground but will also put the long awaited peace processes on the right track. Successive “Saudi” Setbacks in Yemen in this following report.

To discuss this issue with us from Beirut is Ali Mourad political analyst.