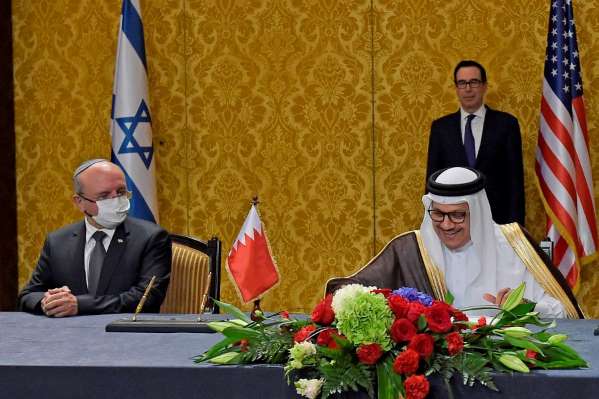 Exclusive– A joint delegation, led by US Treasury Secretary Steve Mnuchin, headed to Manama on Sunday, hoping to ink a communique that officially bolster the US-brokered normalization deal and establish the embassies in the two capitals.

According to the US Treasury, the trip focused on inking memorandums of understanding that cover trade, aviation services, telecommunications, finance as well as economic cooperation, tourism, science and technology.

Streams of citizens, from different backgrounds and affiliations, flood the streets across Bahrain in huge peaceful push to vehemently denounce the visit.

This comes amid the ongoing protests since September following the US-sponsored agreement at the White House, in which Bahrain and the UAE agreed to normalise ties with Tel Aviv.

Note that the Bahrainis’ rights to freedom of assembly and expression are forcibly and brutally restricted. Moreover, the authorities pursue the simplest forms of expression via digital platforms to undermine Bahrain’s wide popular voices against normalisation.

Dozens of citizens were detained or interrogated over their rejection of the deal. A Bahraini poet, Abdul Hussein al-Subai’i was detained over a poem that denounces normalisation.

The now-dissolved, Bahrain’s main opposition bloc Al-Wefaq National Islamic Society has estimated that more than 95% of Bahrainis would voice their opposition to the normalisation deal if only given the opportunity to do so, saying that the ruling monarchy persistently work to silence public outrage over the agreement.

Al-Wefaq appealed to the UN and the broader international community to pressure the Manama regime into allowing the citizens to have the ‘final say’ on this critical deal, which violates Bahrain’s constitution.

Al-Wefaq has been the backbone of the Bahrain’s opposition since the late 1990s. Bahrain’s Court of Cassation ruled to uphold its arbitrary dissolution of Al-Wefaq and handed its General Secretary Sheikh Ali Salman a life sentence over accusations of “exchanging intelligence information with Qatar…[to] undermine [Bahrain’s] political and economic status as well as its national interest to overthrow the political system.”

Although the allegations date back to 2011 well-documented communications between Al-Wefaq leaders and Qatar. They are further documented by the Bahrain Independent Commission of Inquiry (BICI) but the government manipulated them only after Bahrain joined Saudi Arabia, the United Arab Emirates, and Egypt in a diplomatic row with Qatar in June 2017.

According to a study by the Zionist entity’s Ministry of Strategic Affairs, 90% of the Arabic-language social media users overwhelmingly voice opposition to the recent normalisation process.

The survey has examined posts on Facebook, Twitter, Instagram and YouTube mostly under the Arabic hashtags: “normalisation is treason” and “Bahrainis against normalisation,” which has reached more than 100 million social media users between 12 August and 8 September, whereby 45% of the respondents deem it as a betrayal of the Palestinian cause, while 27% object to the signing of any agreement with the Zionists.

A separate study by the Arab Centre for Research and Policy Studies (ACRPS), which ran between November 2019 and September 2020 has also concluded that 88 % of Arabs oppose to normalising clandestine ties with the occupation entity.

Theses findings run contrary to a Zogby poll published by Sky News Arabia (A pro-Emirati news outlet) has allegedly found majorities in Jordan, Egypt, Saudi Arabia, and the UAE are in favour of the deal. This inaccurate narrative has been widely propagated by Bahrain’s state-controlled media in a bid of distorting the anti-normalisation public discourse.

In response to these allegations, Al-Wefaq reiterated that the regime’s attempts to legitimise normalisation are unavailing.

Al-Wefaq has affirmed the Bahrainis’ overwhelming rejection, stressing that the systemic repression and the language of force terrorise large segment of the population as it prevent them from expressing their opposing views.

According to the bloc, the Bahrainis consider the agreement a betrayal to the Palestinian righteous cause, whereby the regime is not authorised to take this sort of strategic decision. It has further stressed  the centrality of the Palestinian cause in the conscience of the Bahraini people.

The agreement is only promoted by a handful of multi-functional paid-propagandists, in a bid by the regime to promoting normalization, a step which again proves the extent of Manama’s failure, the loss of its compass and its divergence from the national consensus, Al-Wefaq said.

Reasons for Bahrain’s Opposition  to Normalisation:

Many across Bahrain reject normalisation with the apartheid regime so long as it continues to illegitimately occupy Palestine, after it has ethnically cleansed the indigenous inhabitants and forcibly appropriated their land and houses.

Seven decades after 1948, hundreds of thousands of Palestinian refugees are still not allowed to return to their homeland.

The apartheid entity has entrenched its occupation with illegal settlement building and expansion, where only the Zionist settlers enjoy many privileges unlike the Palestinians.