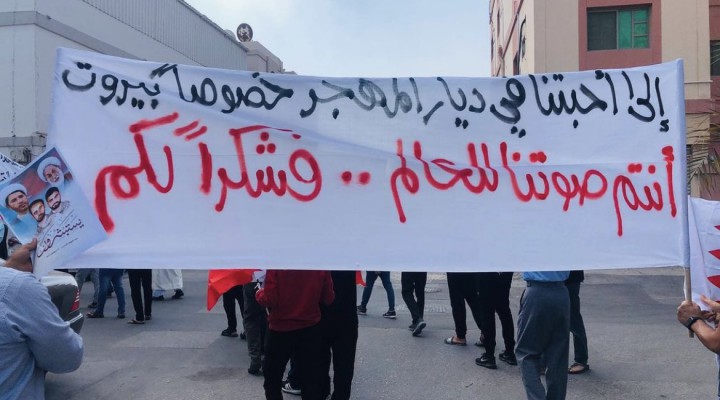 Exclusive– Ministry of Foreign Affairs of Bahrain sent on Sunday, December 14, 2021, a strongly-worded protest to Lebanon regarding al-Wefaq’s recent press conference, held in Beirut, allegedly “for hostile persons designated as supporters and sponsors of terrorism, with the purpose of disseminating and promoting abusive and malicious allegations against the Kingdom of Bahrain”.

The top opposition group’s press conference was held to launch its annual human rights report, entitled “The Epidemic of Violations”, which covers a far narrower period between 2019 and the middle of 2021.

Al-Wefaq’s report maintains that since the onset of pro-democracy protests in Feb,14th, 2011, 20,068 Bahraini citizens have been arbitrarily detained, including men, women and children.

According to report’s staggering findings, most of the 1320 documented violations against Bahraini detainees have involved severe torture, whereby 2 torture victims were even illegally executed. It further reveals a number of 1941 politically-motivated court rulings, whereby hundreds of citizens’ nationalities have been revoked and others have been charged with life sentences.

Jawad Fairooz, al-Wefaq’s former MP, commented that “after systematic and ongoing oppression by all means against freedom of expression inside Bahrain, the government wants to restrict this freedom abroad”.

Fairooz wondered, “Isn’t this a clear proof that Bahrain is a police state?”

In the same context, Bahraini human rights advocate, Sayed Yousif Al-Muhafda, said that the ministry’s allegation has been marred by clear fallacies as “holding conferences does not violate international conventions as the statement claims”.

Sayed Al-Muhafda further revealed that those who had wrote this statement are “not familiar with international law, human rights law, humanitarian law and Lebanon’s domestic laws that guarantee freedom of expression”.

For its part, the Bahraini Press Association condemned what it called “the government’s futile and useless policies” to target its political opponents and human rights defenders, and its “continuous prosecution againt them abroad”.

In a statement, it said that “the government’s exploitation of the recent Lebanese-Gulf crisis to put pressure on the Lebanese side constitutes a miserable step within the policies of repression that Bahrain manipulates to confiscate the opposition political and human rights opinion”.

It also called for allowing a wider space for freedoms, stressing its “constant endeavor to defend the right of activists and journalists to express their own positions and opinions without fear of retribution”.

Just yesterday, Tuesday, December 14, 2021, Sayed Amir Al-Moussawi, a Bahraini citizen who had been forcibly deported to Iran, passed away.

The story of Sayed Amir reminds us of the tragic miseries of hundred of stateless Bahrainis in the diaspora.

Sayed Amir was forcibly expelled from his homeland after revoking his citizenship, along with his brothers in 2012. This is the second death case of forcibly deported Bahrainis during the current year.

Haj Muhammad Fathi passed away on March 7, 2021. His citizenship was revoked for political reasons on November 7, 2012. He had been subjected to arrest and torture in Bahrain’s notorious prisons, and had spent about 25 years outside his homeland until he returned back home in 2001.