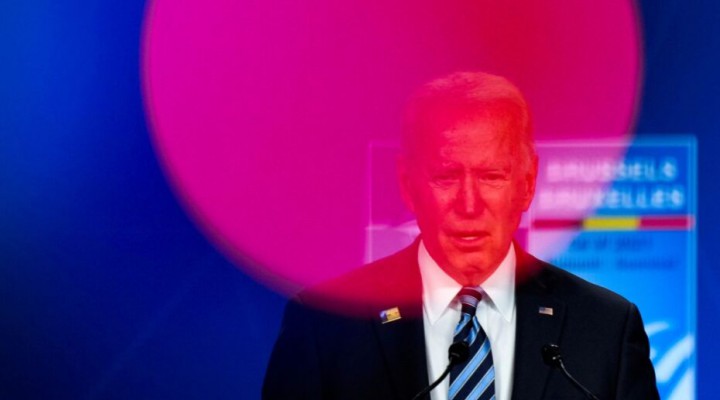 Does Biden have a choice? Can he acquiesce to a negotiated settlement with all three of America’s self-defined adversaries: Russia, China and Iran?

Former thrice-time U.S. Presidential candidate and now political commentator, Pat Buchanan, writes: The present mood of America at Christmas 2021 seems better captured by Jimmy Carter in his ‘malaise speech’ in July of 1979, several days before he cashiered half of his Cabinet. “The threat” to America, said Carter, “is a crisis of confidence. It is a crisis that strikes at the very heart and soul and spirit of our national will. We can see this crisis in the growing doubt about the meaning of our own lives and in the loss of a unity of purpose for our nation”.

“In truth”, wrote David Shribman of ‘that speech that dared not speak its name’, “the country’s woes were palpable, and visible in gasoline lines; in shamefully bad relations with [the President’s] fellow Democrats, including the House Speaker; in inflation that soared beyond 11 percent the month he gave this speech. And all this was four months before Senator Edward M. Kennedy of Massachusetts declared his challenge to Carter for the Democratic presidential nomination and Iranian students seized American diplomats and held them hostage.

Carter’s speech, reflecting the mood of the nation, was initially well received. But when his dirge became contrasted with the optimism of Ronald Reagan, Carter was sent packing. He lost 44 states.

What has this old tale to do with us today? Perhaps quite a lot. The present crisis – in foreign policy terms – may be different, but then read this from the 26 December 2021 editorial page of Washington Post: “This Christmas, hope may feel elusive. But despair is not the answer”. So writes columnist Michael Gerson in an especially poignant Christmas column. Gerson’s piece touches on the too-ample reasons for broad-based, societal despair — the terrible persistence of the coronavirus, the looming threat of a planet upended by climate change, the continuing strains of racial injustice and rising crime, and more: “Everything seems crying out in chaotic chorus: Things are not getting better”, Gerson writes.

The American crisis today stems from a joint political stance taken by the Russia-China axis which baldly has told NATO to take its tanks and missiles off Russia and China’s front lawn, and to keep off it, for good. At the moment, this quasi-ultimatum is open to political resolution. But not for long. Then the conversation will be conducted in military-technical idiom.

The outcome of this crisis likely will decisively rewrite the security architecture on the European continent for an entire generation (and, too, set the precedent for the Pacific and the Middle East architecture). It could result either in Team Biden’s longstanding aspiration for a political achievement to compensate for the Kabul débacle. Or, the failure to manage it effectively, will become another marker of American weakness, and of the unravelling of the transatlantic partnership.

Some of what Russia is proposing will be acceptable to elements within NATO. The reality is that some European leaders, conscious of Europe’s fragile economic situation, don’t want to confront Russia, by pushing NATO membership any further than it’s already gone—even if they continue to pay lip service to the possibility of future expansion. The debate over NATO expansion in the 1990s and 2000s was far from easy, with many European leaders believing that the Alliance shouldn’t expand to include former Soviet republics. There was no easy consensus.

After NATO’s 2016 Warsaw Summit, the alliance decided it would increase its ‘enhanced forward presence’ in Estonia, Latvia, Lithuania, and Poland—each of which shares a border with Russia (Poland and Lithuania border Russia’s Kaliningrad).

Now that NATO cannot move much farther eastward in Europe, aside from offering Ukraine full membership (for which the process has already begun), NATO has turned to stealth NATO-isation in Ukraine – whilst claiming that early Ukrainian membership for Ukraine is not on the cards, but simply remains ‘open’ for the future.

Now, Moscow’s direct challenge to Biden is to demand that the strategic uncertainty be removed. It wants NATO’s written guarantee that it will not admit into the 70-year-old Cold War alliance any more ex-Soviet republics, specifically, Ukraine, Georgia, Armenia and Azerbaijan.

There are many arguments being advanced in the West why not to concede to Putin’s demand – such as fear of a U.S. ‘strategic contraction’, and the end to the doctrine of the option to join NATO being ‘open’ to all European states. (‘Open’ often being an euphemism for quite blatant pressuring of states to join).

Yet, the reappearance of American ‘malaise’ may prove decisive in determining Washington’s response: Jimmy Carter’s ‘malaise speech’ in fact never used the term ‘malaise.’ It spoke of a “crisis of confidence”. It enlisted Americans to battle what Carter called “a fundamental threat to American democracy”. It urged the public to confront “the growing doubt about the meaning of our own lives’’, and though Carter’s popularity grew briefly after his remarks, his poll numbers swiftly sank back to his earlier low levels.

“How long can a democracy endure if it continues to generate such sweeping rejection from the people in whose name it purports to act?

How long before the American people, who consistently show a lack of confidence in the popular branch of government and in the course in which it is steering the nation, begin to lose confidence in the democratic system itself?

Clearly, among the reasons for our present division and national malaise is that we have lost the great animating cause earlier generations had: the Cold War.

George H.W. Bush’s “New World Order” excited only the elites. George W. Bush’s crusade for democracy did not survive the Afghan and the Iraq forever wars that he launched in its name.

Here is the crux of the crisis presented by Putin to Biden: Will the latter risk to suffer Carter’s fate? Buchanan’s point is that Americans have found no substitute cause to replace the Cold War and no substitute adversary like the late Soviet Empire. And now Putin and Xi are inviting him to ‘cancel’ his much touted ‘rules-based order’, and acquiesce to ‘red lines’ set by America’s self-declared adversaries.

Darel Paul, Professor of Political Science at Williams College, expands on precisely why it is that America cannot forsake having adversaries with which it must struggle, and seek to subdue:

“Does the United States even constitute a ‘nation’? In the sense of common descent (the root of “nation” is the Latin nasci, to be born) – clearly not. Widespread fear of such an ethnic sense of American identity drives considerable hostility to the very idea of nationalism. Most American elites prefer words like ‘patriotism’ … The problem with this conception of patriotism is that it is a weak glue. The recent history of the United States offers ample evidence. Rather than objects of agreement – liberty, equality, individual rights, and self-government are instead [today] the objects of discord.

“Here we come to the real glue of America: From the founding of the country in the fires of war, the United States has been an expansionary republican empire ever incorporating new lands, new peoples, new goods, new resources, new ideas. This “empire of liberty,” as Thomas Jefferson called it, knew no limits … Continuous military, commercial, and cultural expansion since Jamestown and Plymouth cultivated the restlessness, vigour, optimism, self-confidence, and love of glory for which Americans have long been known. The glue of America has thus ever been what Niccolò Machiavelli called virtù in service of “a commonwealth for expansion”. Such a republic is always in tumult, yet a tumult that, if well-ordered, finds glory …

“Forward motion thus becomes the lifeblood of such a polity. Without it, the purpose of the civic bonds of unity inevitably come into question. An America that is not a glorious republican empire in motion is not America, full stop. This part of the American mythos Lincoln left unsaid at Gettysburg.

“Since the 1960s, the glory of the American empire of liberty has tarnished. Since the mid-2010s it has fallen under sustained internal attack. The failures of national purpose in Vietnam, Iraq, and Afghanistan are amplified by the failure of globalization to generate common wealth for the commonwealth. If Americans are not united for expansionary republican greatness, what then are all these fissiparous races, creeds, and cultures bound together for? While belief that self-government may perish from the earth without American unity may have been plausible in 1863 or 1941, it is a hard sell in 2021”.

Carter’s malaise speech, reflecting the mood of the nation at the time, initially was well received. But when contrasted with the optimism about America evinced by Ronald Reagan, Carter was humiliated at the polls. “We were all about a ‘shining city on a hill’ – and optimism’,’ Kenneth Duberstein, Reagan’s last White House chief of staff, said in 2019.

Realistically does Biden have a choice? Can he acquiesce to a negotiated settlement with all three of America’s self-defined adversaries: Russia, China and Iran? No doubt, he can get Jake Sullivan to lay out all America’s complaints against Russian action, but can he survive telling the American public that the end to the American Century is foreordained by today’s global power dynamics?

Can he say, as did Carter, “This is not a message of happiness or reassurance; but it is the truth – and is a warning”.

Or, will NATO’s ‘enhanced forward presence’ simply find new life in the Ukraine?