HOME / WORLD / US doesn’t want Iran to have missiles. Some of its neighbors are fine though 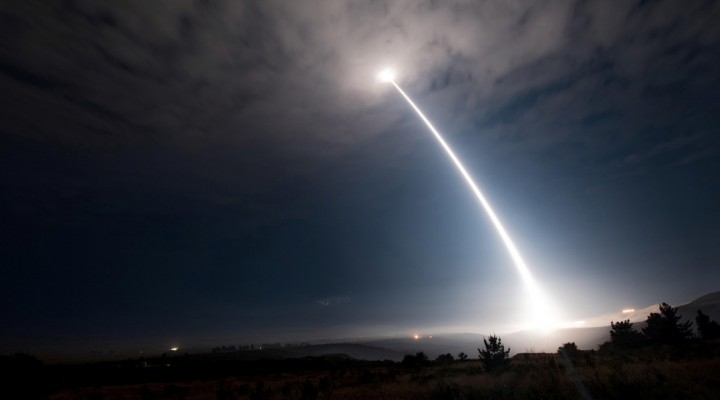 Iran says it needs its ballistic missile force to deter US and Israeli aggression, an argument rejected by consecutive American presidents. But the US silence over Saudi Arabia’s effort to build its own missiles is deafening.

Recent news reports, based on analysis of high-resolution photographs, conclude that Saudi Arabia has purchased from China the technology necessary to manufacture solid-fuel ballistic missiles.

This news comes at a time when the US is seeking to ratchet the pressure up on Iran in an effort to compel it to eliminate its own indigenous ballistic missile production capability, which America and its allies have labeled a threat to regional and global security.

According to the reports, US intelligence first detected the technology transfer during the presidency of Donald Trump. The Trump administration, however, turned a blind eye to the Saudi efforts. President Joe Biden is now confronted with a virtual fait accompli, with the Saudi effort too advanced to be nipped in the bud without creating a major crisis between the two nations.

On the surface, the Saudi effort to develop a manufacturing capability is reflective of its own history of ballistic missile acquisition, which revolves around the notion of them being a force of deterrence, to be used as a weapon of retaliation only. History backs this claim up.

In his autobiography ‘Desert Warrior’ Prince Khaled Bin Sultan, the Joint Forces Commander during Operation Desert Storm in the Gulf War, describes the initial Saudi foray into acquiring a strategic missile capability. After a series of consultations with the Chinese in 1986, King Fahd decided that Saudi Arabia would purchase DF-3 liquid fueled medium-range missiles, and he placed Prince Khaled in charge of the effort, known by its codename ‘East Wind.’

It took two years for Prince Khaled to complete the task. By the time the first DF-3 missiles arrived on Saudi soil, Khaled had overseen a massive construction campaign to build operational, logistical, and training facilities for the missiles and their crews, many of whom had undergone specialized training in China.

This effort had been undertaken in great secrecy, and when news of it broke, there was a tremendous amount of speculation about the Saudis’ intentions. They maintained that the DF-3 was intended for deterrence only–it was a weapon of retaliation, not first strike. My personal experience during Desert Storm serves to confirm this–the American planners had tried to incorporate the Saudi DF-3 missiles into the opening attacks targeting Iraqi ballistic missile facilities, but the Saudis balked, declaring they should only be used if Iraq attacked Saudi Arabia with its own missiles.

This is, of course, precisely what happened–on January 20, 1991, Iraq fired several Al Hussein missiles at targets in Saudi Arabia, including the capitol, Riyadh, the first of dozens that would be launched over the course of the war. Prince Khaled ordered several DF-3 missiles to be readied for operation, holding off only on the fueling of the missiles. But King Fahd demurred, declaring that the DF-3 missiles were a weapon of last resort, and that Saudi Arabia would do better by showing restraint in the face of Iraqi provocation.

Since that time, Saudi Arabia has not used its DF-3 missiles in combat, reinforcing its contention that they are a force of deterrence. For deterrence to succeed, however, the threat of use must be willing. While it is impossible to predict with certainty how the Saudi leadership would respond to a scenario where the use of the DF-3 was necessary, it is critical that if such a decision is ever made, the missiles perform as needed.

The DF-3 is an ageing system. Moreover, because it is liquid-fueled, before it can be launched it must go through a lengthy fueling process which increases its vulnerability to hostile attack.

Back in 1988, the only viable threat to the Saudi DF-3 came from Israel. Today, Saudi Arabia must deal with Iran’s proven ability to launch near-pinpoint ballistic missile attacks at relatively short notice. In short, Iran could destroy the Saudi DF-3 force before a single missile could be launched. The DF-3 is no longer a viable deterrent.

The Saudis had taken measures to improve the survivability of its missile force through the purchase, in 2014, of solid-fuel DF-21 missiles from China. While the DF-21 has road mobility in its favor, and its operation, storage, and maintenance is greatly improved over the DF-3, it is 1960s technology designed to be used with a nuclear weapon. Its poor accuracy (a circular error of probability, or CEP, of around 400 meters) means that the missile is practically useless when employed with a conventional warhead.

What the Saudis are now seeking to acquire is the ability to manufacture a solid-fueled rapid response precision missile, giving it parity with Iran’s capabilities. By focusing on developing a technology base, as opposed to simply buying a more modern finished product from China, Saudi Arabia aims to be able to match Iran step-for-step in terms of ballistic missile tech – a sign that it is serious about acquiring and sustaining strategic parity with its principal regional adversary.

On the face of it, the Saudi acquisition of Chinese missile technology makes perfect sense – too much so. For the Biden administration to acquiesce to the Saudi endeavor, it would be validating Iranian claims regarding its own ballistic missile acquisition effort. Iran’s history of ballistic missile use shows that it, too, views its missile force as a weapon of retaliation. Iran fired SCUD missiles during the Iran-Iraq War, only after Iraq had fired hundreds of missiles against Iranian targets. Iran likewise fired SCUD missiles against MEK terrorist camps inside Iraq from 1994 to 2001, and it fired more advanced missiles against ISIS targets in Syria in 2017, both times in retaliation for terrorist attacks.

More recently, Iran fired 12 missiles against US forces stationed at Al Asad air base, in Iraq, again in retaliation for the US assassination of Qassem Soleimani.

The raison d’etre of Iran’s ballistic missile force, however, is to deter Israel and the United States from conducting any large-scale attack against targets on Iranian soil–especially its nuclear and ballistic missile capabilities. To date, this deterrence has worked and, given its proven ability to deliver precision conventional attacks over long distances, will continue to work in the foreseeable future.

The US, together with its European and regional allies, has made Iran giving up its ballistic missile capability a prerequisite, along with the elimination of its nuclear enrichment infrastructure, for any normalization of relations. Iran’s argument that its missile force provides a necessary deterrence against military adventurism by the US, Israel, and the Gulf Arab states has fallen on deaf ears.

With the US now remaining silent about Saudi Arabia’s new missile production effort, however, it will be extremely difficult for American policy makers to square the difference between their rejection of Iran’s missile capabilities while embracing Saudi Arabia’s acquisition of the same. Hypocrisy, however, is not a stranger to US policy and those who craft it, and one can rest assured that the US will continue to oppose the proliferation of ballistic missile technology in the Persian Gulf region as long as it has a Farsi accent.

0 thoughts on “US doesn’t want Iran to have missiles. Some of its neighbors are fine though”