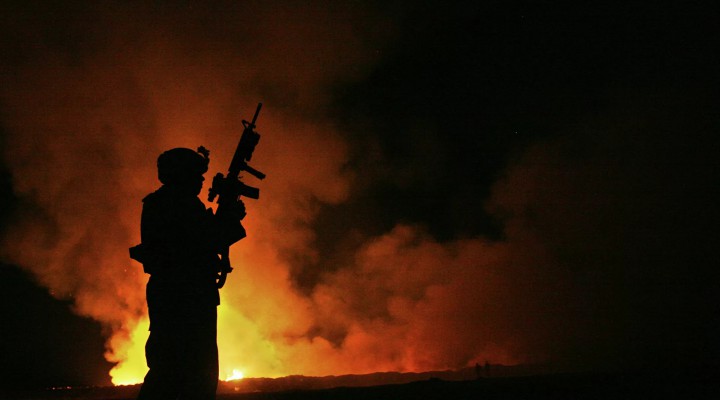 Any nation that refuses submission to the writ of US power is automatically deemed an enemy by Washington. Submission entails allowing control over the economy, military, and culture.

That is why Russia is being targeted with this unprecedented propaganda campaign orchestrated by Washington to paint it as malign. The same goes for China, Iran, North Korea, Venezuela, Syria, Cuba, Nicaragua, and other nations that do not submit to American diktat.

Disabuse the Western media myths. The fundamental problem is not the individual states and the allegations against them. They are not the alleged deviants and delinquents. Turning the narrative around, the common denominator is the United States. Think about it, why is this country always picking fights with others, always preening itself with vain delusions of virtue, while slandering others as “bad guys”? International relations, according to Washington’s depiction, are like watching a bad B-movie in which the US wears the white hat and is perfectly shaved and coiffured.

In reality, the US is the empire of our time. It demands fealty and tribute from all others in the way of facilitating its economic policies, with military threats that underpin them. Instead of a white hat, it’s a balaclava of a sick psychopath who would bludgeon brains to get his way. Russia wasn’t a problem during the 1990s following the collapse of the Soviet Union because its feckless leaders then let Washington run amok with privatization and financial plunder as well waging illegal wars around the world. When Russia became stronger and regained its political authority under Putin, then it reverted to being an enemy for Washington. Russia’s recalcitrance to Washington’s writ became intolerable when Moscow refused to allow US ambitions for regime change in Syria and full control over Ukraine.

The European Union and NATO are just appendages to the US empire. So they are tolerated like flunkeys. So-called European “powers” are in reality non-entities. They take their orders from Washington and have given cover for every criminal war that the American empire deems necessary for exercising its global power.

That difference explains why the US targets Russia, China, Iran, and so on while appearing to tolerate “normal” relations with others. The others are vassals and their relationship to the US empire is far from “normal”. It is vassalage and complicity in crimes.

Russia is an especially coveted prize for US capitalism. The largest country on earth with its prodigious energy and other natural resources is an object of lust for private capital. The Soviet Union denied free rein for US global capitalism. In the 1930s, the Anglo-American managers of the capitalist system cultivated European fascism and Nazi Germany as a cudgel to try to smash Moscow.

Russia today does not pose a head-on ideological opposition to American capitalism but nevertheless, its mere resistance to giving “total control” over to Washington is an ideological problem. Same for China and others on the American hit-list. President Putin is a patriot who believes the resources of Russia are for the benefit of the Russian people, not for Wall Street oligarchs. That belief or rather “heresy” is intolerable for US power. Hence Putin is demonised like there’s no tomorrow.

The history of the United States towards the Soviet Union and today’s Russia is one of imperialism that brooks no opposition. This is the same for all empires, from the Roman to the British, among others. But it is particularly the case for a would-be global capitalist empire that simply must have every resource under its command for total exploitation.

The essence of the United States is aggression. Aggression with no limits. The corollary of that tenet is the countless wars that the US has waged since it became the preeminent global power over a century ago. Tens of millions of lives have been obliterated in its remorseless wars.

Whether we look at the relentless expansionism by Washington against the indigenous American nations, or the expansionism of the US-led military vehicle known as NATO following the end of the Cold War, the recurring, ceaseless dynamic is one of aggression.

Laughably, politicians in Washington and European flunkeys assert that the United States and NATO are “defensive” in purpose. What is so defensive about attacking countries, murdering civilians en masse with drone assassinations and ripping up treaty after treaty to install offensive weapons?

The upshot is Russia has a dilemma. It is proposing to negotiate security guarantees with the United States concerning NATO’s expansion in Europe. But the entire record of the US is one of systematic duplicity. Washington does not do “agreements” and “mutual negotiations”. It does dominance and zero-sum confrontation.

That’s why Russia should not place much faith in the US reciprocating with a reasonable response to Moscow’s deep and rightful concern over encroaching NATO offensiveness. The beast is a predator.

Moscow can present all the legal arguments and no doubt have justice on its side. But at the end of the day, it needs to rely on more than the power of words and truth. American imperialism is the root problem and it doesn’t want compromise.

Washington Is Blinded by Its Hubris

0 thoughts on “Russia’s Dilemma: US Essence is Predatory Power”