HOME / WORLD / If Russia’s Not Bluffing, Then What’s in the Cards? 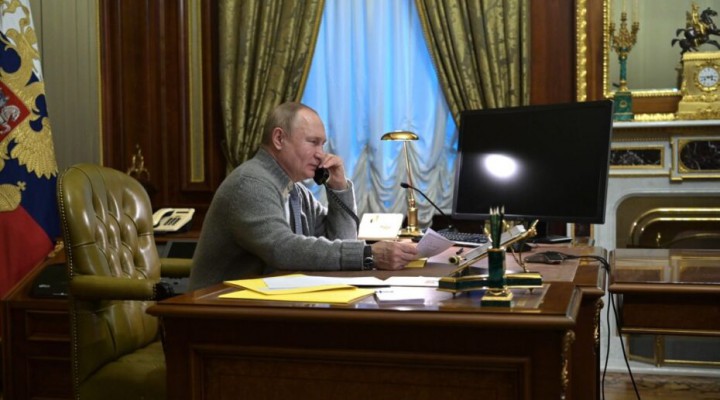 Vladimir Putin is renowned as a strategic chess player. Looks like the world is going to see what his skills are for playing poker.

Russia has said it is not bluffing about its categorical security demands ahead of top-level negotiations with American counterparts in Geneva. Foreign Minister Sergei Lavrov vowed this week that Russia will take a hard line, indicating that the time for vague compromises is over.

History has amply demonstrated that words and promises are expendable when it comes to U.S. and NATO leaders giving assurances to Russia of non-aggression. Three decades of NATO militarism encroaching on Russia’s borders is proof enough.

Henceforth, there will have to be legally binding rules to manage security. That still does not guarantee adherence. Several arms control treaties have been jettisoned by U.S. administrations since the Cold War. Nevertheless, a legal framework is a basic premise. However, after that, there must be a credible alternative warning mechanism to enforce rules.

The demands put forward by Moscow stipulate that the U.S.-led NATO military alliance ceases any eastward expansion, including giving membership to former Soviet Republics such as Ukraine and Georgia. Secondly, the U.S. must withdraw strike weapons that have been placed in eastern Europe such as those in Poland and Romania or any others planned for installment in the Baltic states.

That the United States has responded by holding negotiations in Geneva on January 10 as well as NATO talks with Russian officials on January 12 shows that Washington and its allies have registered the gravity of Moscow’s concerns. Those concerns have been simmering for years over NATO’s relentless expansion since the end of the Cold War. But the recent tensions over Ukraine in which Russia has been baselessly accused of planning to invade have made Moscow’s patience boil over.

The way Russia sees it, it is the U.S. and its NATO partners that have created the dangerous instability and risk of war from their reckless military buildup in eastern Europe and in Ukraine in particular.

The prompt response to hold talks in Geneva by the U.S. and NATO certainly marks a change in attitude. For years, the Americans and Europeans have been dismissing Russia’s admonishments. Incredibly, NATO has not held high-level meetings with Russia for nearly two-and-half years.

Now all of a sudden, it seems, Washington and its NATO allies are finally paying attention. Nevertheless, the signs are that the Western powers remain incapable of comprehending Russia’s security demands. The U.S. and NATO have already haughtily dismissed Russian red lines of precluding further eastward expansion.

A spokesperson for the White House’s National Security Council said of the forthcoming negotiations in Geneva that the U.S. would not make any decisions without input from other NATO allies and partners, including Ukraine. That means Washington’s initial response to Russia will be limited by the anti-Russian, irrational views of Poland, the Baltics states and the unhinged Kiev regime.

The National Security Council spokesperson was reported as saying that negotiations will include “nothing about our allies and partners without our allies and partners, including Ukraine… President Biden’s approach on Ukraine has been clear and consistent: unite the alliance behind two tracks – deterrence and diplomacy. We are unified as an alliance on the consequences Russia would face if it moves on Ukraine.”

In other words, the signs are that Washington still does not get it. Fundamentally, it persists in its arrogant delusion of unilateralism and Russophobia towards Russia.

That’s why Moscow knows it has to be prepared to raise the stakes to a level that amounts to an immediate existential threat to the U.S. Only in that grave situation will the language of concern about security be understood. That’s what is meant by Russia saying it is not bluffing and that a range of military-technical options is available.

Randy Martin, a U.S.-based analyst, reckons that Moscow will put the threat of a nuclear war to Washington’s head as a matter of urgency to wake up the insouciant Americans to the reality of how far their machinations have drifted.

“Russia has set forth what it requires for its vital national security. Russia will explain to the United States what it requires and it will expect a legal agreement. Anything short of that will be ominous for the West. If the U.S. and NATO do not move quickly to ensure the security that Russia expects then Moscow will move expediently to put a nuclear dagger to their throat. It will include submarine tactical nuclear weapons with strike capabilities within seconds, cruise missiles within minutes and obliteration of Western space defenses and electronic warfare that renders naval and air defense useless.”

It seems significant that last month Russia successfully launched an anti-satellite missile. It came as a shock to the U.S. and NATO. Evidently, it was a demonstration of what Russia could do to American defense satellites which would render the United States defenseless.

“Hypersonic cruise missiles in Cuba, Venezuela and Nicaragua might get someone’s attention over cocktails in DC,” he remarks drily.

Russia’s development of hypersonic weapons gives it an upper over the United States.

The latter move follows the precedent of the U.S. placing ballistic missile systems in eastern Europe within minutes of striking Moscow. Therefore, for Russia to put strike weapons within minutes of wiping out Washington is not unwarranted aggression. Rather it is recalibrating the balance of terror that the complacent American rulers have become accustomed to thinking they alone have a monopoly for wielding.

One thing seems for sure. The imminent security talks between the U.S. and Russia are shaping up to be like no others. Russia has reached a threshold of intolerance to further American duplicity and empty assurances. If there are no far-reaching security guarantees produced, then the next move is for Russia to lay down some serious military cards on the table.

Russian President Vladimir Putin is renowned as a strategic chess player. Looks like the world is going to see what his skills are for playing poker.

0 thoughts on “If Russia’s Not Bluffing, Then What’s in the Cards?”