HOME / WORLD / Your Holiness: For Christ’s sake, don’t give a regime that practices sectarian marginalization the privilege of hosting you! 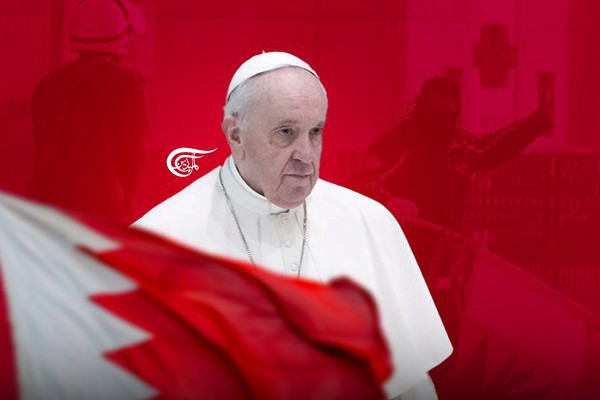 The principle of co-existence can only be achieved through justice among all components of society and not through –questionable events.

Shiite citizens are quite disappointed by the Pope’s November 3–6 visit to Bahrain, whereby religious discrimination is widespread. They believe it is not reasonable that His Holiness did not meet with the Shiite community’s top leaders.

Scores of credible reports show that discrimination and persecution are rampant in work, education, and services among Shiite Bahrainis, whose highest religious authority, Ayatollah Issa Qassim, is unjustly banished and whose dozens of religious scholars are arrested and their citizenships revoked.

Via Twitter, exiled Bahraini activist Ali Mushaima has lamented the fact that Pope Francis will not meet with the Shiite prominent leaders in a country whose “mosques have been demolished and whose religious scholars have been stripped of their nationalities.”

So, observers deem the regime’s move, i.e., not to let the pope meet top Shiite figures, as a fear that its “tolerance and co-existence’ myth and its disregard for the Indigenous will be exposed. They believe the scheduled visit will be exploited by the regime to divert attention from its systematic violations.

Bahrainis hope that this visit will not take place except on the condition of meeting the exiled Sheikh Issa Qassim and the detainees, His Eminence Sheikh Ali Salman, Sheikh Hassan Mushaima, Sheikh Abdul Jalil Al-Muqdad, and other scholars who are nationally and scientifically distinguished, and that it results in a call to release those oppressed, to empower the Shiites in jobs and services, and to launch a serious dialogue with those marginalized factions.

Obviously, Bahrain’s ruling regime is professionally good at deceiving the international community. If it truly respects religions and sanctifies coexistence, why has the Shiite Scholars Council’s chairman, Sayyed Majeed Al-Misha’al, recently been banned from traveling to Iraq for the Arbaeen Walk?  Why has the regime impeded the visit of hundreds of pilgrims to the holy shrines in Iraq, Syria, and Iran? Why did the regime persist in ignoring the recommendation to rebuild the Shiite mosques, which were brutally demolished in 2011? Why are the top Shiite students deprived of equal alienable academic rights?

The visit – if it takes place – will bruise the wound in the hearts of thousands of Shiites because it will be considered an acknowledgment of the regime’s ruthless policies and practices; it will also legitimize their aggravating grievances. However, this is what they do not expect from the Vatican, which works earnestly to enshrine respect among nations.

-Didn’t those concerned in the Vatican brief His Holiness about the latest religious freedom report issued by the US State Department?

-Didn’t they inform him of the UN reports confirming the persecution of Shiites in Bahrain?

-Didn’t they inform him about the arbitrary dissolution of the largest Shiite political association, i.e., Al-Wefaq Society, and the unfair trial and fabricated charges that its Secretary-General was subjected to, despite widely being known for his peacefulness and his moderate political approach?

There are further questions they must ask Bahraini officials.

-Why is there an incomprehensible insistence on restricting religious freedoms and threatening the administrations of religious institutions?
Why is there a systematic manipulation of the official media to incite blasphemy and drag the people into a clash?

-Why did the authorities take advantage of the COVID-19 epidemic-a global catastrophe-to impose additional repressive security measures against the Shiites, especially those behind bars unfairly languishing in unsanitary, overcrowded dungeons?

-What does the regime want from the Shiites, citizens of the second degree, according to the reports of the most important human rights institutions? Does His Holiness know that they are deprived of their most basic rights, that their children, women, and even their children have been arbitrarily incarcerated since 2011, merely because they demanded fundamental freedoms?

-Why the host government does not implement Article 22 of its own constitution, which states, “Freedom of conscience is absolute, and the state guarantees the sanctity of places of worship and the freedom to perform religious rituals, processions, and religious meetings in accordance with the established customs in the country?”

My message to His Holiness

The principle of co-existence can only be achieved through justice among all components of society and not through –questionable events. Your Holiness, Bahrain’s Shiite citizens are subjected to systematic sectarian discrimination at all levels. They are prohibited from the free-exercise of their religion., and they are demonized and accused of “betrayal” on a daily basis. O bearer of Christ’s message of love, mercy, and tolerance, to be a Bahraini Shiite citizen, then your national loyalty is questioned, you will be discriminated against, you will be dubbed in official media as an “infidel”, and there are laws enacted to violate your guaranteed rights.

0 thoughts on “Your Holiness: For Christ’s sake, don’t give a regime that practices sectarian marginalization the privilege of hosting you!”