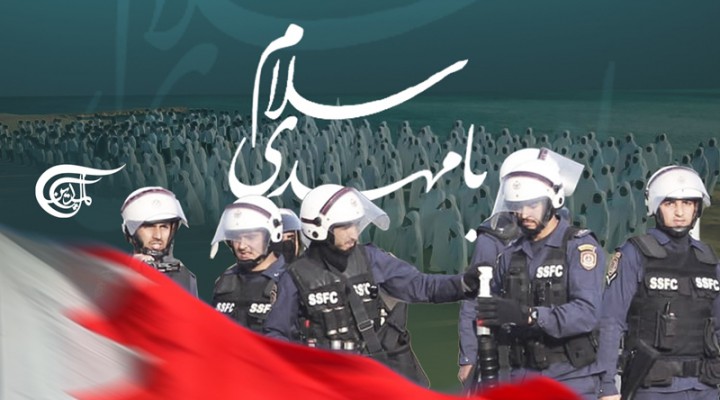 Sectarian intimidation in Bahrain has reached the throats of children yearning for the advent of the promised Savior.

Bahrain, which claims to be the incubator of freedoms and a model of coexistence, launches a widening crackdown on the ‘Salam Ya Mahdi’ hymn.

The Bahraini Ministry of Interior – the regime behind it – is waging a fierce war against the famous ‘Salam Ya Mahdi’ hymn, a tribute to Islam’s messianic deliverer and the last of the Twelve Imams in Twelver Shiism, by preventing the chanting event to be held in mosques and Matams (congregation halls typically used for religious ceremonies) and threatening those in charge of them with imprisonment and accountability, at a time when efforts are multiplied to present itself as the patron of freedom and democracy.

In the purely religious hymn, thousands of innocent children implore Imam Al-Mahdi to appear as they believe that he would establish equity and justice after the globe has been filled with injustice and oppression. Such beliefs cannot be combated by preventing a song or an event, and these convictions are similar in their general outline to the beliefs of several sects. However, the sectarian intimidation in Bahrain has reached the throats of children yearning for the advent of the promised Savior, which coincides with the arbitrary obstruction of pilgrims heading to the holy sites in Iraq and Iran.

The administrator of a local Matam in Sanabis – in the suburbs of the capital city, Manama – has been summoned for questioning for the event. Besides, the authorities impounded a convoy of cars that had turned the hymn on.

Addressing his followers via Twitter, Bahrain’s top Shiite cleric Ayatollah Sheikh Isa Qassim accused the regime of embracing Zionism while persecuting those who adhere to Islamic values and cling to their Islamic culture.

Ayatollah Qassim wrote, “Here, you have no right to raise your children with the love of Ahl al-Bayt [the family of Prophet Muhammad]. The prosecution is severe and so is the punishment,” warning that “the country is open to vile cultures, at the forefront of which is the Zionist culture.” He added that Imam Mahdi, Islam’s messianic deliverer and the last of the Twelve Imams in Twelver Shiism, is no longer “acceptable in the official policy of our country, while Zionism is.”

The Bahraini Constitution stipulates in Article 22 that “freedom of belief is absolute. The State guarantees the sanctity of places of worship, and the freedom to perform religious rituals, processions, and religious meetings in accordance with the customs observed in the country.”

Therefore, the declared war is not linked to the essence of the song, but rather to the unjust systematic abuse and blatant transgression of the freedom of belief, the practice of religious rites, freedom of opinion and expression, and religious and political pluralism. It is rather a violation of the constitution that calls for civil peace and regulates the exercise of beliefs and freedoms.

Thus, this sectarian behavior expresses a narrow-mindedness and an inability to weigh issues and to deal lightly with people’s beliefs and ideologies.

It is absurd to prevent people from practicing their beliefs and traditions that they have spent centuries practicing while opening the doors for the Zionists to practice their fabricated Talmudic rituals that are reinforced by the racist Zionist ideology that perpetrates ethnic cleansing against the Indigenous Palestinian inhabitants.

It is strange too that Bahrain has not recently denounced the promotion of LGBTQ that is widely rejected and even allowed the holding of promiscuity and alcohol parties. Hence, banning the event is an integral part of the comprehensive war against the Shiite presence in the country, including pursuing, interrogating, and arresting religious scholars, as if the issue has become a matter of ideological war, which is a rejected behavior and a reprehensible approach.

The provisions of the constitution are clear and the traditions and customs of these people are also clear, and the government should regulate and protect the practice of these beliefs in a way that enhances civil peace and strengthens national cohesion among the components of Bahraini society.

Security mentality and confiscation of freedoms will not succeed in breaking the will of the people of Bahrain, who are present in all areas of ideological resistance, despite hate speech and heavy crackdown.

0 thoughts on “Alarming vibes of tightening the grip on children; Bahrain bans the ‘Salam Ya Mahdi’ hymn”