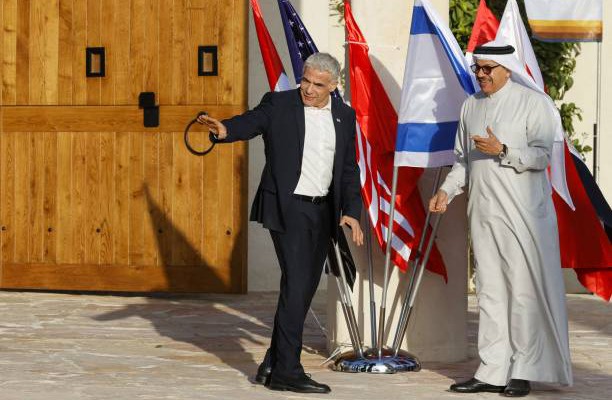 Exclusive- Prior to the scheduled visit of Pope Francis to Bahrain, the regime apparently manipulates its media tools to promote itself as a sponsor of ‘religious tolerance’ and a pioneer to establish ‘global peace’.

Obviously, the elusive regime finds in such an event an opportune occasion to legitimising its widely-rejected normalisation with the Zionist occupation entity and an attempt to show the so-called “Abraham Agreement” as the only saviour for the oppressed peoples of the region.

In an interview with Bahrain’s Al-Ayyam newspaper, which is directly affiliated with the royal household, Aaron Kayak, Deputy Special Envoy to Monitor and Combat Anti-Semitism at the US State Department, currently visiting Bahrain, has hailed the alleged efficacy of the agreement in strengthening Bahrain’s leading position in “confronting hate”. The US official has also praised Bahrain’s alleged “coexistence” overlooking the pervasive religious persecution and systematic discrimination against Shiites in the country, which the US State Department itself recognises in its latest report on religious freedom.

Indeed, the coexistence that the authority praises is that which protects its own interests and strategies, i.e. coexistence with the Zionists, while the Shiite majority endures a disastrous and suffocating marginalisation at all levels.

Concurrently, another newspaper, Al-Watan reveals in a report that the regime has signed about 40 memoranda of understanding and agreements during the two years of normalisation, which confirms Ayatollah Qassem’s constant warning of the colonial intentions of the Zionists, i.e., to occupy Bahrain entirely, “as it occupied Palestine,” and to turn it into a military intelligence colony whereby the citizens have become victims and hostages of the Al Khalifa’s arrogance.

Actually, Manama has gone to extremes in its normalisation as no other government has done, because it bets on it to suppress and intimidate its indigenous people, and to benefit from the Zionist lobby around the world to repel any international criticism of its oppressive practices.

Manama, which rests on Tel Aviv to protect its shaky throne, makes a fool of itself by not taking notice that the worthless occupation itself fails to protect itself from the heroic Palestinians and the rising competencies of the resistance axis in West Asia. Further, it is short-sighted in reading the accelerating international changes that reveal the gradual collapse of the Western axis of evil.

Meanwhile, Bahrain’s Al-Wefaq, the top arbitrarily-dissolved opposition society, has warned, in a statement, against the regime’s employment of religious diplomacy to obscure oppression in the country.

While the Pope will join the so-called “Bahrain Forum for Dialogue: East and West for Human Coexistence”, which will be attended too by Al-Azhar’s grand imam alongside other world religious figures, the regime will exploit the event to deceive the global religious community. Accordingly, Al Wefaq has called on the authority to abandon its frivolous rhetoric aside and seriously move on to “a serious and honest transition that halts sectarian discrimination.”

Since the current ruler, Hamad bin Isa Al Khalifa, took over the reins of power in the country, succeeding his late father  -not through democratic elections-  the ruler has been keen to inaugurate global religious events, including“Islamic-Christian Dialogue Conference” in 2002; followed by the “Conference for the Rapprochement of Islamic Sects” in 2003; the “Forum of Dialogue of Civilizations” in 2008; the “Conference on Dialogue of Civilizations and Cultures” in 2014; the “Declaration of the Kingdom of Bahrain for Coexistence” in 2017; and the establishment of the so-called “King Hamad Centre for Peaceful Coexistence”, which has established the “The King Hamad Chair in Inter-Faith Dialogue and Peaceful Coexistence Programme” and “The King Hamad Faith in Leadership Fellowship Programme” at Sapienza University in Rome.

Rights groups have frequently expressed concerns about the ethical implications of La Sapienza receiving funds from Manama, confirming that all these mock initiatives are nothing but deceitful propaganda brought down by the regime to disguise its systematic targeting of the Shiite population in Bahrain.

Since the 2011 mass pro-democracy demonstrations, Manama has spared no effort to distort the demographics, alongside practising religious marginalisation esp. in employment and education; imprisoning religious clerics; demolishing religious sites. It has shown no tolerance to peaceful dissents and has incarnated them on baseless charges simply like tweeting and re-tweeting criticism of the government and its policies. It has imposed a inclusive ban on peaceful sit-ins, and over the past years, human rights defenders have monitored a number of systematic violations during Ashura, which is one of the most prominent religious seasons for Shiites all over Bahrain and in prisons, where political detainees are repeatedly punished simply for exercising their religious freedoms whilst the culture of impunity limits the possibility of holding those responsible to account.

Bahrain has failed to meet the United Nations (UN) and European Union principles concerning human rights violations. Hence, its relentless effort to maintain such professorships is a cosmetic infiltration into the cultural-religious field. The expected visit will be the first papal visit to Bahrain, so Bahrain’s political forces – of all shades – are jointly counting on its repercussions, and to what extent it would influence the worsening crisis and the realisation of the public legitimate demands.

Al-Wefaq has defined these demands and aspirations as follows: 1. The Pope’s call for a serious dialogue;  2.  advising the authority to restore its senses and halt all forms of sectarian marginalisation and exclusion. These demands are quite consistent with the demands of the Kazakh people. Last month, the Pope called for dialogue and unity, guaranteeing freedom of belief, meeting people’s demands and equitable distribution of resources.

It is noteworthy to mention that Manama has not raised on the visit’s agenda something related to meeting Bahrain’s major Shiite authorities. Al Wefaq and the rest of Bahrain’s societal and political forces view the Pope as a perfect advocate for a comprehensive national settlement, not to be subject to the dictates of the ruling regime. They put the Pope before a test, either to urge the government to resolve the crisis or to be a card that the regime invests in to legitimise itself.

It is remarkable that the upcoming visit coincides weeks away from the date of the parliamentary elections, which are boycotted by the overwhelming majority of the people, led by the great religious authority, Ayatollah Sheikh Isa Qassem, who is forcibly exiled outside Bahrain, and who will not be able to meet the Pope, as well as Sheikh Ali Salman, Secretary General of now-arbitrarily-outlawed Al-Wefaq, who was sentenced to life imprisonment unjustly and falsely.

The boycott of the sham elections in protest against the policy of the security fist and the theft of freedoms and rights, while Bahrain’s parliament has commonly failed to oppose any government decision, for instance to oppose normaliation, and does not have any powers to fight corruption and oppression.

Opponents fear the hypocrisy of the authority, which will exploit the politically naturalised to distort the results.  Among the 508 applications that were accepted to run in the elections, there are only 9 applications for candidates of political associations, which means that the regime succeeded in transforming the parliament into a non-partisan, that is, an independent parliament, and therefore, they can be controlled and any opposition blocs banned, which is a perpetuation of the Political Isolation Law which deprived thousands of citizens -who boycotted the previous sessions- from participating in the decision-making process.

Besides, opponents deeply fear the hypocrisy and deception of the authority, which will exploit the politically-naturalised to falsify the results, and to show fake participation before the international community.  Among the 508 candidacy applications, which were accepted to run in the elections, there are only 9 applications for candidates of political associations, which means that the regime has succeeded in transforming the parliament into a non-partisan assembly, that is, an independent parliament, whose MPs can be easily controlled, whereby opposition blocs are banned,  that is a consecration of the Political Isolation Law, which has deprived thousands of citizens, who boycotted the previous sessions, from participating in the supposed decision-making process.

Thus, the active societal forces in Bahrain, therefore, put the Pope now before two options, either to urge the government to resolve the crisis or to be a card that the regime invests in to legitimise its brutality.