HOME / Exclusive Subjects / Protest against the Bahrain’s normalization with Israel 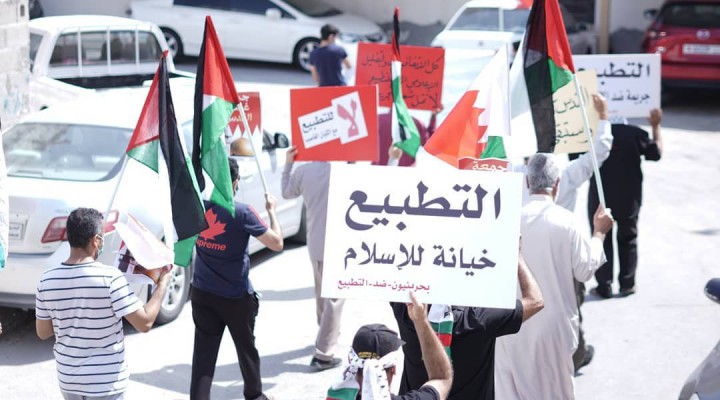 Exclusive- Ever since the Sep 15th US-brokered normalization rapprochement, and defying Manama’s trigger-ready security forces, defiant Bahrainis have taken to streets on masses to head off vociferous protest, waving Bahraini and Palestinian flags, as well as placards that condemn the deal. New massive protests are being held this Friday, this time under the title of “Friday of Collapse of the Betrayal Agreement”, stressing they will never clinch any ties with the Zionists that might trample on the interests of their fellow Palestinians and their righteous cause.

According to Bahrain News Agency (BNA), Manama yesterday hosted Yossi Cohen, the head of Israel’s Mossad to feature talks with the heads of the country’s intelligence & strategic apparatus over “intelligence cooperation” stressing the importance the deal would play in significantly “promoting stability and peace in the region”.

Bahrain’s masses, elites, CSOs, political opposition blocs and numerous independent circles have roundly denounced the shameful détente. Throughout the decades-long conflict with the occupying enemy, they have repeatedly pursued a principled and coherent stance against normalization, slamming any attempts to forfeit the Palestinians’ rights and to expropriate their lands. Besides, they assert that Manama’s stance and the ongoing favorable coverage of the sheer betrayal by the state media outlets does not represent the Bahraini public opinion.

Bahrain’s highest Shiite religious authority Ayatollah Sheikh Issa Qassim has frequently reiterated his condemnation of Manama’s normalization agreement saying that statements issued by officials behind the agreement reveal that the Palestinian cause and the causes of the nation have become secondary.

Bahrain’s opposition say the brokered deal only serves the US-based Zionist lobby’s votes for Trump in the upcoming presidential election and deflect attention from a political crisis that Netanyahu is grappling with. They strongly believe that Jordan and Egypt’s experiences have only well weakened the Arabs and added to the arrogance and obstinacy of the Zionists apartheid regime. This came particularly whereby Bahrain’s economy shrank by 8.9% compared to the same period in 2019. Further, the hospitality industry was hit hardest with a 61.3% decline.

Elsewhere throughout the Muslim and Arab worlds, wide demonstrations against Bahrain and UAE’s détente have been held in chorus with the Palestinians, condemning the step and setting fire to Zionist entity’s flags.

Since September, authorities in Bahrain has reportedly summoned an unspecified number of activists and citizens in a bid to stop them from taking part in the ongoing protests against the deal. Online activists have reported that those summoned were asked ‘to pledge’ that they would not take part in the public demonstrations. Bahraini poet Abdul Hussein Ahmed Al-Subai’i was investigated by Manama’s so-called Terror Crime Prosecution over one of his poems that denounces the normalization agreement.

0 thoughts on “Protest against the Bahrain’s normalization with Israel”