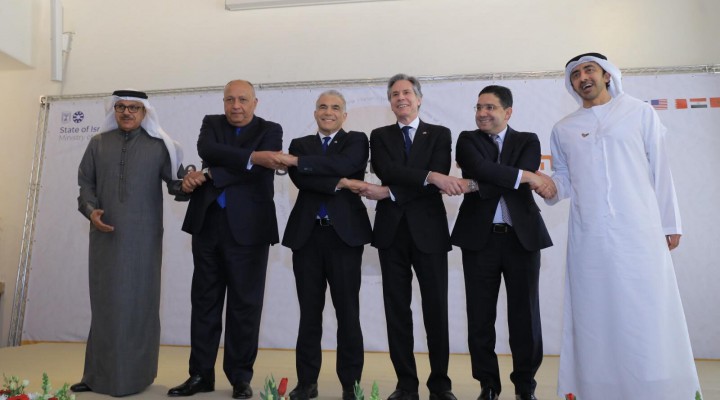 Over the past week three summit meetings were held — in the Naqab, Sharm el-Sheikh, and Aqaba respectively — in which Israel was directly or indirectly the main player. Their combined goal was to anoint it as the region’s leader and establish an Arab-Israeli NATO based on the so-called Abraham Accords and their earlier variants.

The cornerstone for this new alliance was laid at the ‘Negev Summit’ which began on Sunday in the Naqab in southern occupied Palestine and was attended by US Secretary of State Antony Blinken and his counterparts from Egypt, the UAE, Morocco, Bahrain, and the host country Israel. This was by far the most ominous of the three meetings. It constituted an official and public Arab embrace of the occupation state at every level, and tied its security and existence to the Arab regimes that shamelessly took part in this gathering directed against the Iran-led Axis of Resistance.

All three summits were supposedly prompted by concern that the Vienna talks could lead to a new nuclear deal that would lift all sanctions on Iran, recognise its regional role, unfreeze billions of dollars of its assets, and take its Revolutionary Guard Corps off the US terror list.

The Negev Summit was not merely ceremonial. Its two-day duration indicates there was a detailed agenda to discuss covering the terms of a joint defence pact or alliance and plans for military and security cooperation drawn up by the US. This could also entail joining the US side in the Ukraine war against Russia, a risky gamble for the Arab states concerned risks that has no guarantee of success.

Israel no doubt considers Iran and its paramilitary allies to pose it an existential threat. But that is in our interest as Arabs (or those of us who still believe in that designation). What threat to they pose to more than 100 million Egyptians, or to Morocco thousands of kilometres away?

The founding of this new Arab/Israeli NATO entails the fragmentation of the Arab World, the burial of the Arab League and Arab summitry as an institution, the utter abandonment of the Palestinian cause and the Arab identity of Jerusalem, and the adoption of the Zionist project in full, giving it a new lease on life after a period when Israel was fretting about losing its qualitative military edge.

It was excruciating to see the Arab foreign ministers involved in the Negev Summit visit the grave of Israel’s founder David Ben Gurion and lay a wreath in his honour. Some of them may have even shed a tear or said a prayer for him. I wonder if any Israeli or US official ever visited the grave of Egypt’s late great president Gamal Abdel Nasser? This is the ultimate in humiliating self-abasement.

The coronation of Israel as chief of this new Middle Eastern NATO is both an iniquity and a major mistake. This alliance will not succeed in confronting Iran and its partners, nor in allaying its members’ fears or providing them with protection. It is more likely to aggravate matters and expose them to additional security threats that could lead to the destabilisation of their regimes.

The US — defeated in Iraq, Afghanistan, Syria, and elsewhere — is no longer the feared global superpower it was. Its weakness was illustrated in the Ukraine war where it failed to provide or lead an effective NATO military response and was reduced to imploring Arab governments, one by one, to help it out, without much success so far.

The countries on the other side of the Arab divide are targeted by this new alliance. They need to break their silence and join forces in a united Arab Muslim front to thwart it and defend themselves. We refer here specifically to Algeria, Syria, Iraq, Yemen, Lebanon, the Palestinian resistance factions, and some undecided Gulf states. Such a new Arab axis could wield considerable power. And it would have the backing of a ‘semi-nuclear’ Muslim regional power, Iran, and an emerging global coalition led by China and Russia challenging US dominance of the world’s affairs.

NATO, with all its might and glory, could not prevail in Afghanistan, Iraq, or Syria. Similarly, its mutant Israeli/Arab offspring will be incapable of protecting the occupation state or its ‘Abraham Accords’ partners.