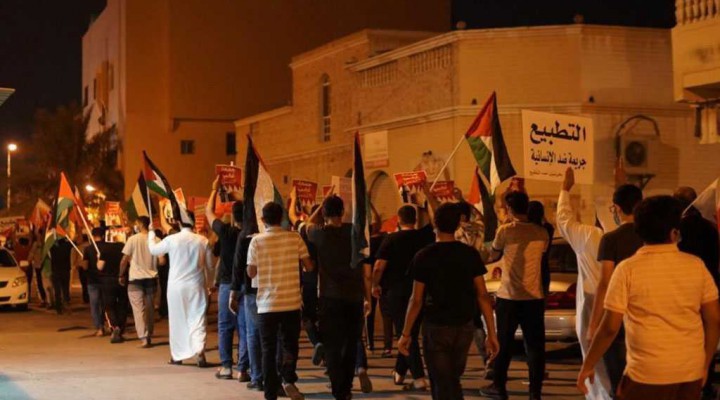 Exclusive- Palestine, as far as the Bahrainis are considered, is not only an Arab humanitarian issue but rather a domestic indisputable concern, whose responsibility is held by each and every one of them, from different ages, affiliation and ideologies. The steadfast and vigilant Palestinians are their brethren and their cause is their first honorable cause.

For this reason, and amid the ongoing ban on the freedom of assembly and the imposed restrictions on the freedom of expression, tens of thousands of Bahrainis have protested on Twitter against what they call “Accord of Shame,” “Accord of Betrayal.” They, on daily basis, express apologizes to Palestine for the crime of normalization with the apartheid Zionist enemy, committed by the illegitimate government.

17 of Bahrain’s CSOs have issued explicit and strong-language statements to reject the shameful normalisation step. On the popular level, and despite the imposed ban on assembly, the refusal was expressed through field demonstrations in separate areas in Bahrain, most notably the ones that took place on Friday dubbed as “Friday of Jerusalem’s Wrath,” also despite the repercussions of the recently increased spread of COVID 19 pandemic.

Not to mention, thousands of Bahraini citizens have signed the global “Code of Honour to Palestinian Cause” as well as 235 Bahraini clerics have issued a  statement in this regard.

The Al Khalifa and the rest of ruling families in the Persian Gulf are mostly committed to Washington’s policy, and they have long been functioning in favor of those colonialists. Hence, they are currently functioning as Trump’s puppets, especially in his electoral campaign as the polls indicate that he is behind his rival Joe Biden and needs to gain the United States’ Jews pivotal votes.

The authoritarian Bahrain government, has no political or economic weight, but it has followed its Big Brother’s orders, which makes it obvious that Saudi Arabia has manipulated the latter to test the pulse and the reactions before it takes its own step, especially due to the religious status it represents.

Bearing in mind the recent course of events and the current normalization step is nothing but a tantamount to prepare the ground for a joint coalition for a new Middle East, led by the United States of America and the usurping entity by virtue of confronting an alleged Iranian threat in the region.

The Palestinian cause is one of the crucial issues in the history of the Bahraini people and it is even, supposedly, enshrined in the constitution, and therefore normalization of cordial ties with the enemy is not only a stab in the back of the Palestinians but also unconstitutional.

Besides, Bahrain’s top spiritual leader Ayatollah Sheikh Issa Qassim stressed that normalization with the Zionist entity is against religion and law.

Indeed, the anti-Zionism position has been strengthened in the conscience of the watchful people of West Asia and Bahrain, who firmly refuse to recognise this cancerous tumor in this region, and amid the decline in the US power.

0 thoughts on “Apologise to Palestine: Bahrainis Express Endless Embarrassment Upon the Shameful Treacherous Accord”