HOME / WORLD / A Peace Deal Like No Other: Much Ado About Nothing, But Act 2 Is Coming Up 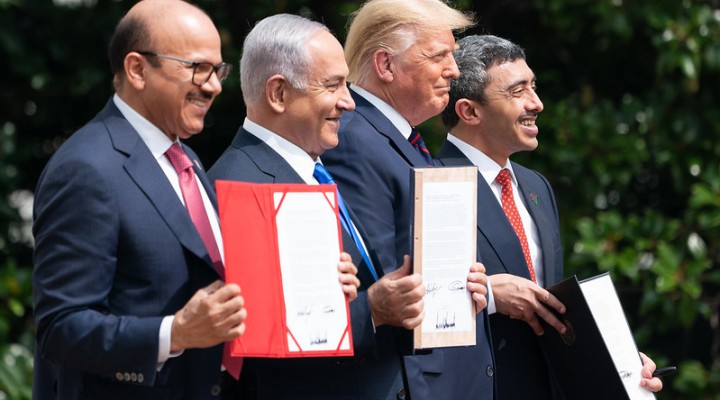 It is odd that the White House is gloating over its claimed peace agreement in the Middle East at the same time as one of the signatories is bombing Syria, Lebanon and Gaza. It all suggests that peace in the region will exclude designated enemies and the friends of those enemies, since the ties among the three parties – Israel, United Arab Emirates (UAE) and Bahrain – is transparently in part an offensive alliance directed against Iran and its friends, to include Syria and Lebanon. A significant amount of the horse trading that preceded the gala signing ceremony in the White House involved who would get what advanced American weapons down the road. The UAE wants F-35 fighter bombers while Israel is already asking for $8 billion for more top-level weapons from the U.S. taxpayer to maintain its “qualitative edge” over its new found friends.

For the more sagacious readers who chose to ignore what took place, a short recap is in order. Last Tuesday President Trump hosted a White House signing ceremony during which Israel established formal ties with the two Arab states. The agreement was dubbed the Abraham Accord because it purports to build on the foundation provided by the fraternity, as one might put it, of the three Abrahamic religions, namely Judaism, Christianity, and Islam. More specifically, it created the mechanism for diplomatic, economic, and cultural ties between Israel and the two Arab countries. It should be observed that both the UAE and Bahrain are close to being client states of the U.S. Bahrain is in fact the home port of the U.S. Fifth Fleet that operates in the region and it also hosts headquarters of the U.S. Naval Forces Central Command (NAVCENT). Both countries have long had de facto semi-secret relations with Israel on security issues and Israelis have been able to travel to them as long as they do not do so on an Israeli passport. And they both also know that the road to improving already good relations with Washington passes through Israel.

Israeli Prime Minister Benjamin Netanyahu personally attended the ceremony, together with the foreign ministers of the UAE and Bahrain. Trump enthused “We’re here this afternoon to change the course of history” and presented a replica gold key to the White House to Netanyahu. It is not known if the two Arab ministers received anything beyond a “don’t let the door hit you in the ass on your way out.”

The president observed that the two Arab nations were the third and fourth to normalize relations with Israel, following on Egypt in 1979 and Jordan in 1994, and predicted that five more Arab countries might soon also recognize Israel. Oman and Qatar, which hosts the major U.S. airbase at Al-Udeid, are likely to be next in line as both have close ties to the United States and have never exhibited much hardline anti-Israeli fervor. The claim made before the signing, that Israel would stand down on its plan to annex much of the Palestinian West Bank as a quid pro quo for the agreement was not discussed at all, nor was it part of the document. It is generally believed that Israel will wait until after the U.S. election to make its move.

The Palestinians, who have been on the receiving end of Israeli nation-building were not invited. There were some demonstrations by Palestinians in Gaza and Ramallah denouncing the signing as it took place, together with chanting that “Palestine isn’t for sale.” Indeed, Palestinians are more-or-less invisible in Washington, having had their representational office closed by Trump in 2018 after he had been shown a fabricated video by Netanyahu in which Palestinian Authority President Mahmoud Abbas appeared to be calling for the murder of children. Secretary of State Rex Tillerson also viewed the video and informed the president that it was an obvious fabrication, but Trump was convinced by it.

The U.S. media, always inclined to applaud anything that advances Israeli interests, registered its approval of the agreement. And there were calls for awarding the Nobel Peace Prize to Trump for his miraculous achievement, not as ridiculous as it sounds as it is at least as well deserved as the one that was given to Barack Obama. Trump the peacemaker has a nice ring to it, and it quite possibly pay off for the president in terms of votes and political contributions. Indeed, if one looks at the White House ceremony dyspeptically, it becomes clear that the whole event was staged for political purposes to advance GOP interests in the upcoming election. If it changes anything on the ground at all it actually worsens the chances for peace in the region. The UAE and Bahrain are now locked into a unified effort to oppose Iran by military force if necessary, with open support from Israel plus covert aid from Saudi Arabia as well as the full backing of the United States.

One might reasonably argue that the agreement was a win for Israel, the UAE, and Bahrain, as they have succeeded in obliging the U.S. to support their own regional security interests for the foreseeable future. The media, defense contractors and politicians bought and paid for by Israel will be able to assert that the U.S. must retain significant forces in the region to defend Israel and friendly Arab states against the largely fictitious “Iranian menace.” It is unfortunately a major setback for United States efforts to limit its exposure to any and all political developments in an increasingly unstable the Middle East. If the White House had really wanted to disengage from the quagmire that it has found itself in, it was an odd way to go about it.

And the Palestinians are left with nowhere to go, the presumption being that with lessening Arab support they will be reduced to begging Israel (and the U.S.) for a deal that will reduce them to the status of helots. That conclusion just might make them desperate and could trigger a new and even more bloody intifada.

The downside of the agreement is already beginning to play out as the United States is preparing to unilaterally impose sanctions on Iran that will include possible seizure of Iranian ships in international waters, while Secretary of State Mike Pompeo has also warned Russia and China against trying to sell weapons to Tehran. One might well ask, how exactly does Pompeo propose to do that? Will he shoot down Russian transport planes or sink Chinese and Russian flagged ships? How does one go from being crazy to being batshit crazy, and what about all those Americans and others who would prefer not to be on the receiving end of a nuclear exchange?

Trita Parsi, who follows the situation in the Middle East closely, has suggested that Pompeo might even be planning an October Surprise, which might amount to some kind of provocation or even a false flag operation that would result in open conflict with Iran with the U.S. arguing that the fighting is both lawful and defensive in nature.

Such a suggestion might be considered insanity, but there are signs that the U.S. in heightening its delegitimization campaign against Iran. Unconfirmable allegations from anonymous U.S. government sources are surfacing about an alleged Iranian plot to kill the U.S. Ambassador in South Africa. And, as of Saturday, Washington is now implementing its new sanctions regime and there is a distinct possibility that an Iranian vessel in the Persian Gulf might be seized, forcing Iran to respond. The U.S. Navy has already intercepted four Greek flagged tankers in the Atlantic Ocean on their way to Venezuela, claiming they were carrying Iranian petroleum products, which were then confiscated. Given the demonstrated propensity to use armed force, anything is possible. The thinking in the White House might be that a containable war against a recognized enemy might be just the ticket to win in November. Of course, once the fighting starts it might not work out that way.

0 thoughts on “A Peace Deal Like No Other: Much Ado About Nothing, But Act 2 Is Coming Up”