HOME / WORLD / War à la Mode: Will a Vindictive Trump Start a War With Iran or Will He Bring the Troops Home? 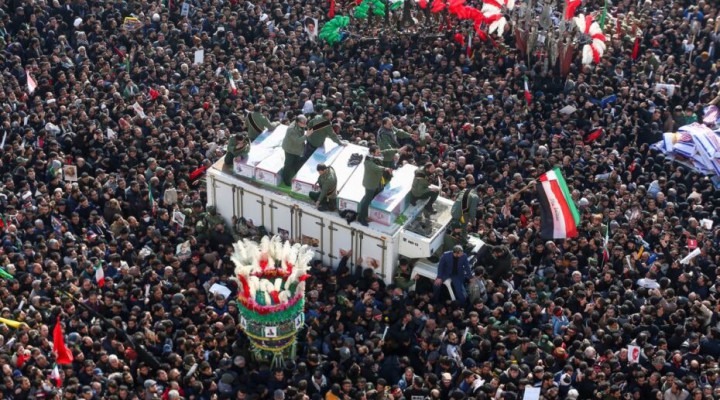 United States governments, both Democratic and Republican, have been doing the unspeakable and unjustifiable for some time now.

I have a crazy idea that I can’t get out of my head, that we Americans are heading for something like an Armageddon in the next several months no matter how the currently electoral imbroglio is resolved. My greatest concern is that I fear that Trump is going to attack Iran, either through some kind of false flag contrivance or through direct aggression. The stage has already been set for military action through the unrelenting hostility towards the Islamic Republic over the past four years combined with an economic war waged against the country’s economy and the deliberately provocative assassination of an Iranian leader, General Qassim Soleimani in January. In truth, it would not require much to start a shooting war, just an errant patrol boat creeping into Iranian coastal waters and opening fire when challenged by a Revolutionary Guards speedboat. A couple of Iranians die, maybe also an American or two and you will have a war.

Speculation that something might be coming derives in part from how several top level Pentagon personnel changes have occurred at a time that makes no sense for a lame duck administration or even for an administration that thinks it will reverse the electoral results. The “termination” and replacement of Mark Esper as Secretary of Defense has been explained as being due to his resistance to orders by the president to carry out a troop withdrawal from Afghanistan, but as such a withdrawal would hardly even be started by January, it doesn’t seem to make sense to make the change in the command structure right now. Indeed, having new leadership would only slow down the process, even though new acting Secretary of Defense Chris Miller has reportedly issued a memo last Friday saying “All wars must end” and there has been an announcement of troop reductions in both Afghanistan and Iraq before January, though we shall see how that actually develops. The arrival of anti-interventionist Colonel Douglas Macgregor at the Pentagon as Senior Advisor to the Acting Secretary of Defense is also supportive of the view that a major withdrawal of U.S. forces is impending.

It is also plausible that Esper was fired due to his resistance to using soldiers to put down rioters in the event of civil unrest between now and January, but that too lacks credibility as such a move would certainly be opposed by entire Joint Chiefs of Staff who would not cooperate. Yet another explanation is that the termination was due to Esper’s reported resistance to releasing classified files relating to Russiagate, which Donald Trump might be seeing as a final exposure of the national security conspiracy that sought to destroy his administration.

Be that as it may, in addition to Esper, the Pentagon’s acting chief of planning James Anderson was also forced to resign. Anderson was replaced by hard-liner Anthony Tata, who is believed to be fiercely loyal to the president and has supported some “deep state” conspiracy theories about the Obamas. The changes at the top in the Defense Department have also triggered resignations of other senior staff including retired Vice Adm. Joseph Kernan, who was undersecretary of defense for intelligence and security. Kernan was replaced by Ezra Cohen-Watnick, a friend of presidential son-in-law Jared Kushner. There reportedly continues to be some concern among other top managers that a witch hunt is in progress.

The cleaning house at the Pentagon as well as persistent rumors that it will soon be followed by firings at the Attorney General’s office, the FBI and the CIA make little sense at this point in the electoral cycle, whether or not one believes that the election results in the U.S. will be reversed. But taken together, they might give Trump a free hand to do whatever he wants in the next two months, to include possibly using some elements in the national security apparatus to intervene directly in the counting and transition processes. They signal to me that an angry Trump just might be preparing something really vindictive and also incredibly stupid in terms of national interests.

President Donald Trump clearly has a visceral hatred for Iran. It has been reported that as recently as last week he asked senior advisers whether he ought to attack Iran’s main nuclear site at Natanz. The meeting reportedly came shortly after international inspectors observed what appeared to be a significant increase in the Iranian stockpile of nuclear material. The advisers convinced the president that a military strike might quickly escalate and would not be in U.S. interests, however.

Secretary of State Mike Pompeo has also already served notice on the centrality of Iran in White House thinking. A recent New York Times report regarding the assassination of an alleged al-Qaeda leader in Tehran that is sourced to unnamed “intelligence officials” is intended to suggest that the Iranian government is working with the terrorist group, which is not the case. Pompeo’s State Department also has announced that the U.S. is going to continue to increase sanctions on Iran as well as on Syria. Analysts believe the intention is to create such an all-encompassing network of sanctions that they will not easily be undone, so no one in the future can mend fences with Iran by seeking to restore anything like the nuclear program inspections established by the Joint Comprehensive Plan of Action (JCPOA). The move is clearly intended to prevent Joe Biden, if he should become president, from trying to reverse Trump administration policies towards the Islamic Republic.

There are other indications that the Trump White House is moving ahead with measures to put even more pressure on Iran. Elliot Abrams, who is in charge of Iran policy as Special Envoy, has just been in Israel on a visit to discuss how the Trump administration, in coordination with Israel and several Gulf states, will impose the new sanctions on Iran in the remaining weeks left before inauguration day, just in case Biden’s election is confirmed. And Mike Pompeo has also stopped in Israel for a visit and talk with Prime Minister Benjamin Netanyahu.

Those trips come oddly at a time when you would think the two administration loyalists would be needed in Washington. Israel is, of course, lurking in the shadows on anything having to do with U.S. policy towards Iran. Israel manages the current White House through multi-billionaire donor Sheldon Adelson and the Israelis, though confident of their ability to direct Joe Biden just as they controlled Barack Obama, are also warning the incoming president that if he seeks to restore the nuclear inspection agreement Israel will have to “take steps” and there will be war with Iran.

In an admittedly more alarming report suggesting that Israel will be able to take control of whoever is in charge in Washington, “Shimrit Meir, an Israeli analyst and commentator, told JI [Jewish Insider] that Prime Minister Benjamin Netanyahu would likely ‘save the option’ of having the Republicans in control ‘for a desperate time — a looming agreement with Iran that doesn’t address [Israeli] concerns, for example.’ A Republican Senate will have an ability to ‘apply unique pressure on a Biden administration’s foreign policy,’ suggested Richard Goldberg, senior advisor at the [neocon] Foundation for Defense of Democracies.”

Just exactly who would be doing the fighting and dying in any event is not exactly clear, but as Israel’s government and its U.S. lobby own the Democratic Party, Biden is not likely to be so bold as to bite the hand that feeds him and he will forego taking the risk of initiating any rapprochement with the Iranians.

In addition to doing yet another favor for Israel, a little, hopefully containable, war could also be beneficial in other ways. If it is hyped enough by an acquiescent media, it could possibly generate something like a state of emergency declaration prolonging what we are going through right now and the inauguration of Biden will just have to wait. Are Trump and Pompeo capable of that? Maybe.

Is all of that just too outlandish to consider? And what can be done to stop it? I would observe that I am not the only one whose danger antennae went up when the top Pentagon officials were ousted so soon after the election. Even the Israeli press is speculating that an attack might be coming and Mondoweiss has a compelling piece entitled “An unhinged Trump could still unleash violence against Iran but the U.S. media downplay the danger.” The article cites a New York Times piece discussing the Pentagon firings which includes buried in the text “. . . Defense Department officials have privately expressed worries that the president might initiate operations, whether overt or secret, against Iran or other adversaries in his waning days in office.”

The Times followed up with another article on the Pentagon changes on November 11th, which began with “A purge of the senior civilians at the Pentagon and the ascension of a similar hard-line policy official to a top job at the National Security Agency have prompted concerns that the Trump administration may be planning new punishments for Iran…” Given that the generally tone-deaf newspaper of record just might have a reliable source could suggest that the rest of us should also take note. One would like to know who those unnamed Defense Department officials were and one might ask “What do they know that we the public should know?”

Some might argue that even for the Trump administration an unprovoked attack on a foreign country just days before a transition in government here at home would be a bridge too far. But that assessment is somewhat naïve. United States governments, both Democratic and Republican, have been doing the unspeakable and unjustifiable for some time now. Let’s hope that instead of a new armed conflict Donald Trump has the vision and fortitude to deliver on what he promised to do four years ago. Let’s end the wars and bring the troops home.

0 thoughts on “War à la Mode: Will a Vindictive Trump Start a War With Iran or Will He Bring the Troops Home?”