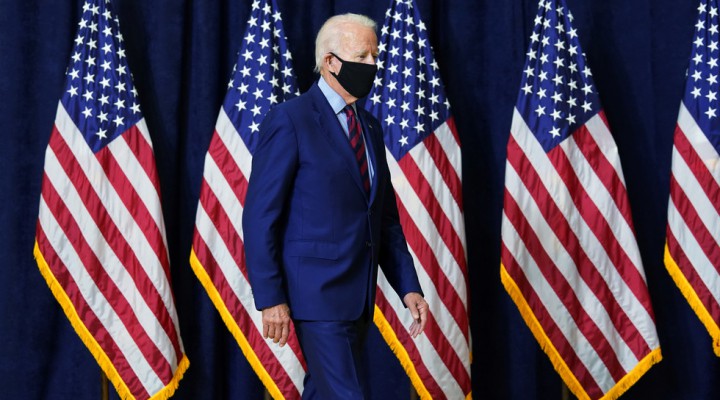 The world Vice President Biden knew at the end of the Obama administration no longer exists. In four years, President Trump reshaped the geopolitical reality around the globe, making Biden’s dreams of “normalization” impossible.

If the press reports are true, it appears that much of the world joined the roughly 50 percent of Americans who celebrated the news that Joe Biden had passed the Electoral College threshold of the 270 votes needed to become president-elect. While America struggles to find a path where Biden will be able to restore domestic tranquility to a deeply divided nation, the world will likewise need to get to grips with how it will respond to an administration whose thinking is rooted in a world that no longer exists.

The geopolitical reality that existed in 2016, following eight years of the Obama administration, has been radically transformed after four years of a Trump administration which broke with virtually every previously held diplomatic norm, tradition, and precedent. It was not just US policy that had been altered – the world also changed, forced to adapt to Trump’s unconventional approach toward international affairs. A Biden administration which seeks to recreate the world that existed in 2016 will find itself ill-prepared to deal with the harsh new realities of a post-Trump world.

Repairing the US economy will be a top domestic priority for a Biden administration, and this cannot be without consideration being given to the contentious state of US-China relations. Policies seeking to bring an end to the ongoing US-China trade war will collide with Biden’s tough rhetoric regarding China’s military presence in the South China Sea and elsewhere. It is hard to see how either can be done in isolation, meaning the status quo inherited from the Trump administration will likely remain for some time to come.

Re-entering the Paris Climate Accord will not pose much of a problem – the US never treated it as a treaty, with then-president Obama bypassing constitutional requirements for Senate advice and consent by simply signing an executive order. But is unlikely that Biden will be able to get Congress to fund a multi-trillion-dollar initiative at a time when the US economy is reeling from the economic downturn brought on by the Civd-19 pandemic. In short, Biden’s plan to rejoin the Paris Accord is little more than political theater with no chance of meaningful success.

Repairing the Iran deal… or not

Another “day one” priority for Biden is to rejoin the Joint Comprehensive Plan of Action (the JCPOA, or Iran nuclear deal). President Trump precipitously withdrew from this Obama-legacy agreement in May 2018 (another agreement enshrined not as a treaty, but rather through executive order). Biden has committed to rejoining the deal “once Iran returns to compliance,” and then use the JCPOA as the basis upon which to negotiate a broader and longer-lasting deal with Iran.

One of the first challenges confronting a Biden administration is to navigate the issue of what constitutes “returning to compliance.” It was the US, not Iran, that withdrew from the JCPOA, and today the JCPOA framework continues to exist, sans America. As such, the first step that must be taken is for the US to rejoin without pre-conditions. Then and only then would Iran consider the possibility of resuming negotiations about any post-JCPOA agreement.

However, some of Biden’s key foreign policy advisers appear to have re-thought their position on Iranian sanctions, which would be lifted if the US rejoined the JCPOA. There is a feeling that the Trump policy of “maximum pressure” might be on the verge of paying dividends. Void of any up-front commitment regarding future nuclear policy, ballistic missiles or regional interference, there is a feeling in the Biden camp that keeping sanctions in place might be the best policy option vis-a-vis Iran.

Further complicating any future Biden Iran policy will be how a Biden administration deals with the issue of troop withdrawal from Afghanistan, Iraq and Syria, and the Trump Arab-Israeli “peace offensive” which has seen several Gulf Arab States normalize relations with Israel as part of an effort to solidify an anti-Iranian coalition in the Persian Gulf. It is highly likely that Biden will seek to solidify the US military presence in the region, thereby threatening the peace agreement with the Taliban, and provoking pro-Iranian militias in Iraq. Likewise, Biden will seek to use the US military presence inside Syria as a means of strengthening US-Kurdish ties. In short, a Biden administration will find itself rapidly bogged down in the forever wars in the Middle East, with no plan on how to either win or get out.

Likewise, the issue of Turkey looms large. Turkey’s involvement in Syria, Libya, Iraq, and now Azerbaijan has changed the geopolitical landscape in the eastern Mediterranean Sea, the Levant, and the southern Caucasus in the four years since the Obama administration. Any effort to aggressively confront Turkey would need to be taken in conjunction with Biden’s plans to “repair” America’s relationship with NATO and the rest of Europe. This is especially the case regarding Turkey’s contentious relations with both France and Greece.

NATO itself is a major issue confronting a Biden administration. Biden has said he will renew good relations between the US and its NATO allies strained by four years of the Trump administration. But what does this mean exactly? Will Biden keep US the forces in Germany that Trump had begun to withdraw? And what will Biden do about US forces in Poland? Does Biden’s pledge to “get tough” with Russia extend to doubling down on demanding new elections in Belarus? Providing more lethal aid to Ukraine? Further encouraging Georgian membership in NATO? What will Biden’s policy be regarding intermediate-range missiles in Europe following Trump’s withdrawal from the 1987 landmark INF Treaty? The reality is Trump has left a potential Biden administration a tangled mess in Europe, where any policy initiative in one area raises a host of problems in another.

How to be tough on Russia

And then there is the issue of Russia. Biden spent his entire campaign promoting how “tough” he was going to be on Russia, and in particular its president, Vladimir Putin. Two major decisions that will be confronted by a Biden administration early on, however, would require more finesse than muscle. The most pressing will be the extension of the Obama-era New START treaty, set to expire on February 21, 2021 – exactly a month and one day after President Biden would be sworn into office. Russia has indicated that it is ready to extend the New START treaty without preconditions, and it is likely that a Biden administration would seek to do just this in order to preserve the last reaming arms control framework between the US and Russia. The next step, however – negotiating a follow-on treaty – requires an atmosphere of trust that, on the surface at least – appears to be lacking on the part of a new Biden administration, especially if it is simultaneously seeking to appear “tough.”

Another problem is that of the Nord Stream 2 gas pipeline, connecting Russia with Europe. The Trump administration has put in place strong sanctions designed to kill the project. Germany, a critical NATO ally and one of the nations with which a Biden administration would logically be seeking to repair relations (especially after the particularly contentious relationship between Trump and German Chancellor Angela Merkel), has taken umbrage over what it deems to be US interference in its sovereign economic interests.

When Biden was vice president under Obama, he called the Nord Stream 2 project“a bad deal for Europe.” Every indication is that Biden continues to embrace this stance. Even if Biden were to soften his position on Nord Stream 2 as an olive branch to Germany, however, it would not mean that Biden would be willing to soften the US policy on sanctioning Russia over Ukraine. The fact is, Biden does not much care for Putin, and it is hard to see how the kind of personal relationship that preceded most meaningful US-Russian diplomatic breakthroughs could be engendered, let alone prosper.

There are many other critical foreign policy challenges facing a potential Biden administration, including the issue of North Korean nuclear weapons, Venezuela, the war in Yemen, and the growing ISIS presence in Africa, to name but a few. A Biden administration would most likely seek to bring into its ranks foreign policy and national security experts who had been weaned on eight years of the Obama administration. But the world these experts left in 2016 no longer exists. Moreover, these experts have been virtually shut out from any advisory role during the Trump administration. A new Biden foreign policy team will be seeking to rebuild relations with a world based upon an outdated game plan, creating the potential for a disconnect between expectations and results that could further strain America’s relationship with the global community.