HOME / WORLD / No Matter Who Wins, The War Machine Wins 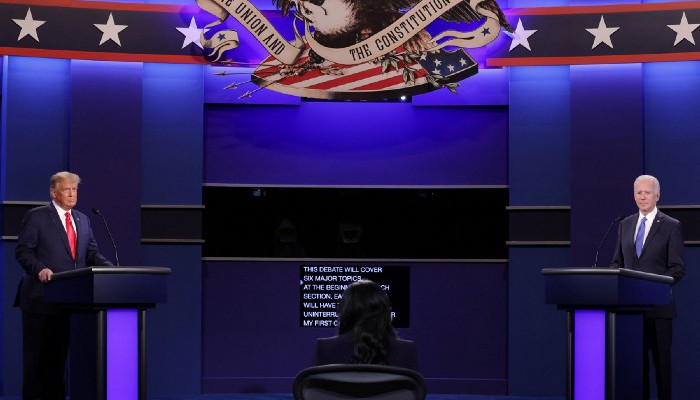 The US government is pushing yet another unproven election meddling narrative about yet another disobedient government, this time targeting Iran and Russia.

This is exhausting. Do I really need to type this bullshit out?

At a press conference with Director of National Intelligence John Ratcliffe and FBI Director Christopher Wray it was announced that Iran and Russia have separately obtained some voter registration information, and that Iran has been using its information to send bizarre threatening emails to Democratic voters with the goal of swaying the election.

As usual, no evidence of these allegations has been provided. Democrats are saying this completely unsubstantiated claim proves the Iranians want to help Trump, Republicans are saying it proves they’re trying to help Biden. Both are ridiculous.

I note these paragraphs in particular: pic.twitter.com/JfGnc1moZ1

The Reuters write-up on the allegations cites one source who says it’s unclear who was actually behind the threatening emails, and that “the evidence remains inconclusive” that Iran had anything to do with them. Washington Post’s report notes that the allegation against Iran “was leveled without specific evidence”, and that metadata gathered from the emails points to “the use of servers in Saudi Arabia, Estonia, Singapore and the United Arab Emirates, according to numerous analysts.” No attempt is made to address this discrepancy.

If the US government held a press conference announcing that Iran is in the Middle East I’d have to check a map just to make sure it’s not an island in the South Pacific or something, that’s how much constant, shameless lying they’ve been doing about that nation lately. There is no reason whatsoever to believe unproven assertions by opaque government agencies who have an extensive and well-documented history of lying about governments they want to target.

This latest allegation adds to the steadily increasing pile of narratives the US intelligence cartel has been heaping onto public consciousness that no matter who wins the presidential election, a foreign enemy will have been partially responsible for it. The ODNI made an announcement in August that Russia is interfering to ensure Trump’s re-election while China and Iran are interfering in favor of Biden.

What this steadily-growing narrative means is that no matter who wins this election, America’s spies and cold warriors are going to be able to use it to advance their pre-planned agendas against the world’s few remaining nations which have resisted absorption into the US-centralized power alliance. In exactly the same way they’ve been able to use Russiagate to advance pre-planned cold war escalations against Russia during the Trump administration, they are ensuring their ability to roll out pre-planned escalations against Iran and China in the event of a Biden win.

Imagine for example if Biden gets in after the US intelligence cartel has successfully marketed the narrative to click-hungry media outlets that Iran has been meddling on his behalf. What kinds of political pressure will his administration be placed under if it wants to restore the Iran deal and begin rolling back sanctions and de-escalating tensions? Probably very similar to the pressures Trump was placed under to continually advance hawkish cold war escalations against Russia despite his stated desire for Washington and Moscow to get along.

You can understand the purpose all these “election meddling” narratives are serving if you can understand two points: firstly, that we are in the middle of a slow-motion third world war between the US-centralized empire and the remaining nations which have resisted being absorbed into it. Secondly, that this war is moved along by propaganda.

Point 1: We are in the middle of a slow-motion third world war between the US-centralized power alliance and the nations which have resisted being absorbed into it.

A loose alliance of nationless oligarchs who use governments as weapons have secured control over a large empire-like cluster of nations with economic and military might loosely centralized around the United States. In order to gain more power and ensure its ongoing hegemony, this oligarchic empire must keep expanding by absorbing more nations and brutalizing them if they resist. China is by far the most powerful of the unabsorbed nations, followed by Russia at a distant second and Iran at a distant third.

Nuclear weapons make another hot world war undesirable, so this one takes the form of resource control, economic warfare, staging coups, arming oppositional militias to use as proxy armies, expanding military presence in key geostrategic regions under the pretense of fighting terrorism, and “humanitarian interventionism”, with old-school full-scale ground invasions used only as a last resort, and only after manufacturing sufficient international approval to ensure the continued cohesion of the empire-like power alliance.

But the end goal is the same as that of a conventional world war: to beat the other side into submission and compliance. And, in this case, absorption into the imperial blob. After the fall of the Soviet Union, the prevailing orthodoxy in US power structures became that the US must maintain unipolar hegemony at all cost to maintain a “liberal world order” (even if it means abandoning “liberal” values whenever it’s convenient). From that point on the agenda has been global domination and the slow, suffocating subversion of anyone who gets in the way.

Point 2: Propaganda is used to move this world war along.

In a conventional war each side has clear military objectives that everyone understands, and the weapons are naturally moved around in accordance with these objectives. In this weird slow-motion world war, nobody understands what’s going on besides the major power players and those who are paying very close attention. The various agendas against the governments of Iran, Venezuela, Russia, Syria, China etc appear different and unrelated when looked at individually, and indeed you will see different political factions supporting some of these agendas but not others. The only thing unifying this slow-motion movement toward the destruction and absorption of all unabsorbed nations is carefully constructed propaganda narratives.

The way these unifying propaganda narratives operate is simple. It would never occur to rank-and-file citizens that a nation on the other side of the planet that’s pretty much just doing its own thing needs to be sanctioned, subverted and brought to heel, so the imperialist oligarchs who own the political/media class make sure everyone is fed custom-made narratives according to their own ideological echo chamber to prevent any domestic inertia from being thrown on these agendas. Once there’s sufficient agreement that Saddam/Gaddafi/Morales/Assad/Maduro/whomever must go, the campaign to subvert, sabotage and absorb that government can safely be escalated.

Trump opposed sanctioning China’s government over its atrocious human rights violations to protect his hollow trade deal and serve his own personal interests.

Where Trump has been weak, I will be strong, clear, and consistent in standing up for America's values and its people. https://t.co/AgGPD46JJN

Over the last couple of weeks I’ve been getting more and more brainwashed Trump supporters in my comments saying with high confidence that Joe Biden is bought and owned by China. This would be the same Joe Biden who saw an extreme escalation in aggression against China in the Obama administration’s “pivot to Asia”, and whose anti–Beijing campaign rhetoric gives every indication that he intends to continue that aggression when elected. If he doesn’t, we may be certain that the US intelligence cartel will magically discover some top secret evidence nobody’s allowed to see that the rise of China needs to be stopped.

Only a blithering idiot would believe that this lifelong warmonger is going to be soft on China despite the mountain of evidence to the contrary. These Trumpists spent years rightly mocking liberals for their maniacal Russia hysteria, yet their rhetoric about Biden and China sounds very much like the pre-election low rumble which eventually turned into the fever pitch demented shrieking of peak Russiagate insanity. If Biden wins the election it would not at all surprise me if evidence keeps being leaked to the press from anonymous sources painting Biden as a Xi puppet, and Republican hacks promulgate that narrative to demand increasing aggression against China.

So no matter who wins, the war machine wins. If it’s Trump then they continue manufacturing narratives to justify escalations against Russia, if it’s Biden (as looks very likely) they’ll sell escalations against China and Iran. They’re in no special hurry since they’ve got power on their side, so they can just keep ramping up the pressure on the world like a python squeezing its prey to death.

Meanwhile normal, healthy human beings just want a world where people cooperate with each other and with their ecosystem to create a harmonious world. We don’t have to put up with a world that is dominated by sociopaths who endanger us all with armageddon weapons with the goal of planetary hegemony. There are more of us than there are of them. If we wake up to what’s going on we can absolutely turn this thing around.

0 thoughts on “No Matter Who Wins, The War Machine Wins”