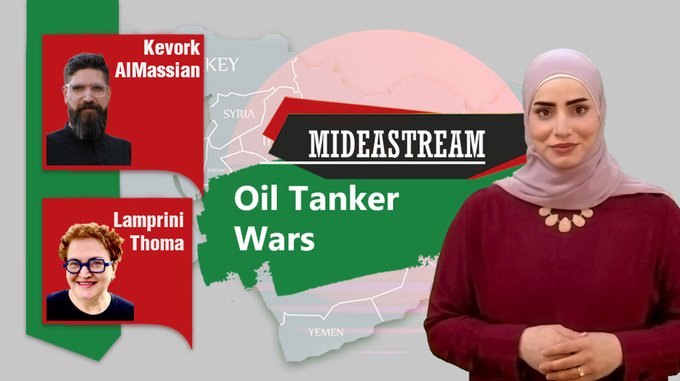 In a quick response to the United States’ confiscation of a shipment of Iranian oil off the coast of Greece, Iran’s Islamic Revolutionary Guards Corps seized two Greek oil tankers, in the Persian Gulf. Tehran accuses Athens of helping the United States seize an Iranian oil tanker over alleged sanctions violations in the Mediterranean.

The raid marks the first major incident at sea in months as tensions remain high between Iran and the West over its tattered nuclear deal with world powers.

To discuss this issue with us from Athens is Lamprini Thoma, journalist at The Press Project and MC at Radio Venceremos.

More than a week after Ankara launched a media and political campaign in search of a deal that would allow it to annex more Syrian land under the pretext of fighting Kurdish forces, Turkish President Recep Tayyip Erdogan lowered the expectations that had risen dramatically, to talk about two small enclaves in the countryside of Northern Aleppo that fall under the supervision of Russia.

Thus, Erdogan throws the ball into Moscow’s court, in the context of the negotiating game he is playing to exploit the war in Ukraine, while the Syrian Kurdish separatists SDF appear to be facing a new difficult test, as all eyes turn towards how this deal will be played out.

To discuss this issue with us from Berlin is founder of Syriana Analysis YouTube channel and news website, Kework Almassian.