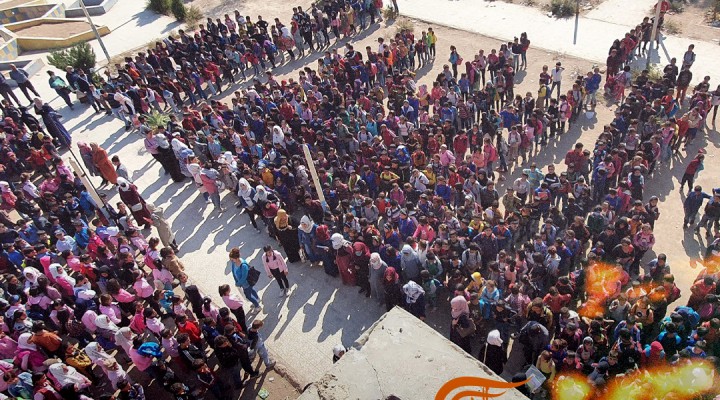 Indeed the Syrian state is present and active in most of the Hasakeh region, contrary to the many international ‘yellow zone’ maps of eastern Syria.

Tens of thousands of Syrian children have enrolled and joined classes in state schools across Hasakeh province, in northeast Syria, after the collapse of the US-backed, SDF/QSD Kurdish separatist education regime.

The Syrian education system in the northeast is under severe pressure because the US occupation has confined state schools to small ‘security zones’ protected by the Syrian Arab Army, such as those in the province’s major cities of Qamishli and Hasakeh.

That means that these schools have thousands of students and huge classes, at times a hundred children in each class. Nevertheless, Syria has a remedial curriculum for children who have missed years of school, the mass closure of schools means there are sufficient teachers and UNICEF is helping with some demountable buildings and school books. The regional director of education, Ms. Elham Sourkhat told the writer that, of the 2,189 schools in Hasakeh province most are now closed, with many used for SDF/QSD militia purposes. However, Syria is running 145 schools, including 22 large ones in Hasakeh city and 20 in Qamishli city.

She estimated that the US-backed SDF (QSD in Arabic) is running another 50 schools, where they teach mainly in the Kurdish language and with their own curriculum. However, these have poorly trained teachers and their curriculum is not recognized in Syria or the region.

A western left-liberal myth has been that the Kurdish SDF militia and its ‘autonomous region’ is some sort of indigenous self-determination. It is nothing of the sort. It is part of and entirely dependent on the US military occupation.

Kurds are one of several minorities in this region and Kurdish separatism here has been led by the Turkish PKK. Photos of Turkish Kurd leader Abdullah Öcalan adorn many public places.

The Kurdish minority in Syria’s northeast corner has swollen in recent decades, mainly through immigration from Iraq and Turkey. Back in 1939, near the end of the French colonial period, Kurds in Qamishli and Hasakeh were counted as about 30%, while the mainly Christian Assyrians and Armenians were 29% and Arab clans were 39%. Some ethnic cleansing took place in the middle years of the current US-led war but substantial Christian communities are still present. George, active in the semi-dormant local council of occupied Qamishli, told me that Christians were about 62,000 before the war but are down to about 50,000 today. Arab clans remain the largest group in the province.

There are far fewer Kurds in the other parts of the wider US-created ‘autonomous administration’ area – including parts of Aleppo, Raqqa, and Deir Ezzor provinces – all controlled by the US military and its SDF/QSD clients.

Washington knew this when it created the ‘SDF’ in 2015. As the large northern city of Manbij had very few Kurds, the US military tried to present ‘SDF’ agencies there as non-sectarian and with only a minority Kurd presence. But Kurdish separatists always dominated this ‘SDF’ and have had little success in co-opting northern or eastern Syria’s majority Arab clans. In 2018 a British think tank report recognized that SDF attempts at local governance in the mainly Arab city of Deir Ezzor were ‘headed for failure’. The majority Arab population of Manbij (Aleppo province) has also revolted against this Kurdish domination.

That failure is now evident in Hasakeh province, where families have been voting with their children’s feet, in search of a decent education.

In the classrooms that I and my Syrian colleague Nihad Roumieh visited, we saw between 50 and 100 students, usually with three teachers and often 4 or 5 students per desk. Some of the little ones were standing. Nevertheless, they had Syrian workbooks and were making their way through the primary curriculum. Ms. Sourkhat told us that the province has about 140,000 children enrolled in the Syrian curriculum, but only about 25% of these can attend school regularly. Nevertheless, the other 75% are able to submit exams, after informal schooling at home, in makeshift classes, or sometimes after internet private classes from volunteer teachers. Many are simply not in any school system.

Yet we were told many times that the SDF/QSD militia has been obstructing delivery of school books and harassing students and teachers, claiming they are supporting the government. Teachers and students also face obstacles in traveling long distances to school. Transport has become expensive and incomes are very low, due to the US economic blockade.

QSD has been kidnapping hundreds of young men including boys over 14 years of age and those in displaced persons camps for ‘compulsory service’ in their militia. This is a serious cause of friction between families and QSD. There have been a number of revenge attacks on the QSD militia, and the occasional attack on the US occupation, which has been stealing Syrian oil. 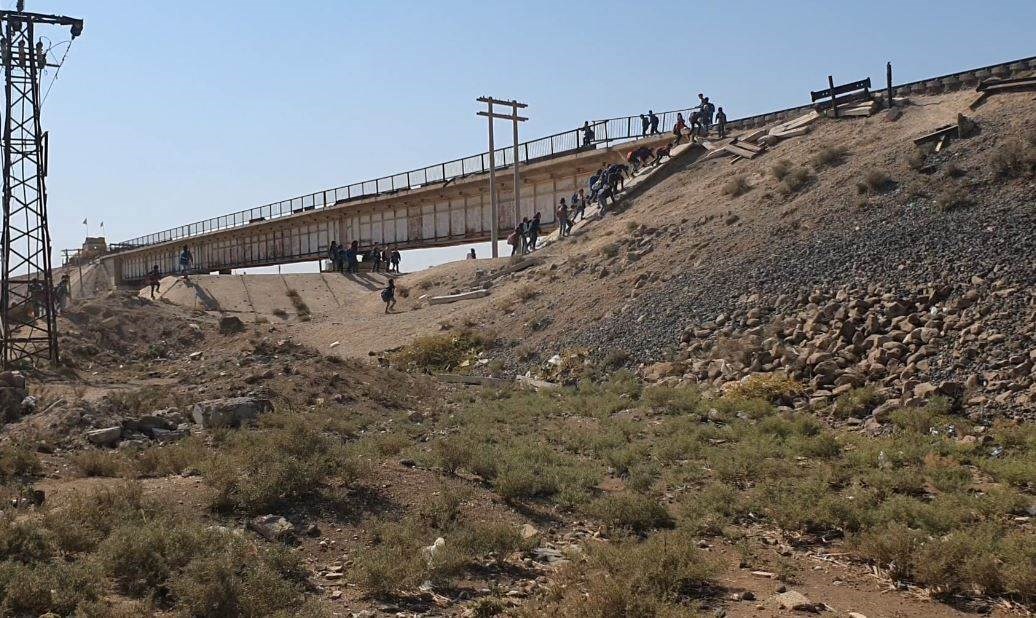 A senior Syrian officer confirmed to us reports that QSD had been helping the US occupation move ISIS fighters around eastern Syria, to carry out more attacks on the Syrian Army.

Several Syrians told us of their belief that QSD has been deliberately destroying the school system to keep the next generation illiterate and ignorant. They also complain of the group’s links to and parallels with “Israel”. Indeed the western image of a heroic ‘socialist feminist’ Kurd group is reminiscent of the 1970s western myth of Israeli Kibbutzniks ‘farming the desert’, with little mention of the ethnic cleansing of Palestinian people. A Jacobin article even borrows the Israeli ‘blooming in the desert’ phrase and uses it for the US-sponsored ‘autonomous administration’ in Raqqa.

In Qamishli city Nihad and I visited the Al Orouba selective school for distinguished students. Hundreds of female secondary students in pink blouses were beginning their afternoon shift. Deputy Principal Ms. Nagah Ali told us that there were previously 300 in this school, but those numbers had grown to 600 and the school was now running morning and afternoon shifts. Students came from all over the region and included the children of some QSD leaders.

On the day of our visit, the QSD militia had detained the school’s librarian and her assistant. Ms. Ali said this sort of thing was a regular occurrence. The boys had stopped wearing their blue uniform shirts, to avoid harassment from the US-backed militia, who saw these uniforms as the sign of a Syrian state presence.

Indeed the Syrian state is present and active in most of the Hasakeh region, contrary to the many international ‘yellow zone’ maps of eastern Syria.

The Syrian Army is deployed throughout the province and in the major cities, around most major infrastructure (e.g. Qamishli’s airport and hospital) and across 90% of the northern border. Damascus backs Qamishli’s public hospital and most of the damaged education system. And the local councils are in place, ready to resume their duties.

A Syrian general told me he believed QSD would last “only days” after a US withdrawal. Fearing this, Washington has been in talks with the Russians over the future of its client militia.

Meanwhile, separatist Kurd leaders, fearing abandonment and new military offensives by Erdogan, are looking to the Russians, British, and Europeans. But many know they will soon be turning back to Damascus.

Iran & Syria: How Arab and Western countries are shifting posturing toward Damascus