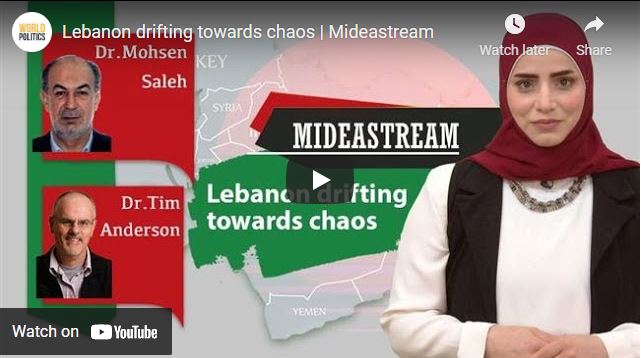 Crises-hit Lebanon over the weekend teetered on the verge of complete chaos driven by the Lebanese pound’s dramatic nosedive against the dollar that sent agitated Lebanese to the streets across the country, blocking highways with burning tires in Beirut and other areas and attacking public utilities to protest the deteriorating economic conditions. This coincided with the breakdown of public services that has left the country in total darkness and with closed gas stations as a result of severe fuel, gasoline and diesel shortages that have threatened to bring to a complete halt private generators on which the majority of the Lebanese and businesses, including hospitals, depend for electricity.

To discuss this issue with us Beirut is Dr. Mohsen Saleh, political commentator.

The Yemeni armed forces announced earlier last week a military operation targeting Saudi forces, where days after the announcement, the Yemeni military media broadcasted scenes from the operation of the Yemeni armed forces targeting a camp of the Saudi coalition aggression with dozens of Qasef 2K drones, in the Al-Wadea border area. Spokesman Brigadier General Yahya Saree, announced the killing of a number of Saudi officers, and the killing and wounding of more than 60 fighters in the ranks of the Saudi coalition aggression, in this large-scale military operation.

To discuss this issue with us from Sydney is author and academic Dr. Tim Anderson.