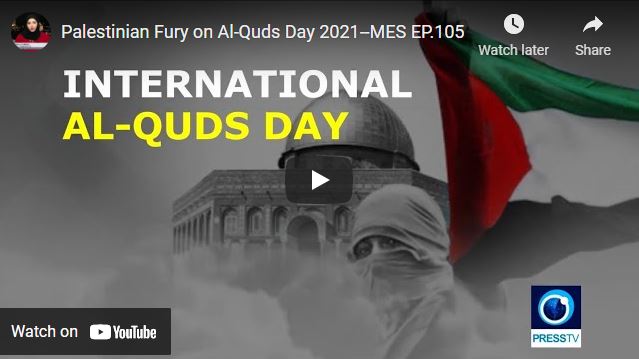 Al Quds day is not a day to celebrate a city in occupied Palestine. It is the last Friday in the holy month of Ramadan launched by the leader of the revolution Ayatollah Ruhollah Al Khomeini to reiterate that the issue of Al-Quds Al-Sharif is the core of the Palestinian cause. It is a day for every free soul to acknowledge that the only just solution for the perpetual conflict between Arabs and the Zionist illegal Israel is the ending of the occupation and the return of the City of Al-Quds Al-Sharif to Palestinian sovereignty, as the capital of the State of Palestine. To discuss this issue with us from Beirut is Omar Nasahbe, political writer and commentator.

Meanwhile, the Yemeni armed forces and the popular committees continue their accelerated advance in the northern governorate of Marib, where the US-led Saudi coalition of aggression against Yemen is facing a major dilemma as a result of their failure to halt the advancement of the Yemeni resistance. Meanwhile, the death of a large number of leaders of the forces loyal to Abd Rabbu Mansour Hadi during the past two weeks on the frontlines of Marib, exacerbated intra-accusations of “treason” inside the Saudi-Emirati coalition camp. To discuss this issue with us from Beirut is Ali Mourad political commentator.