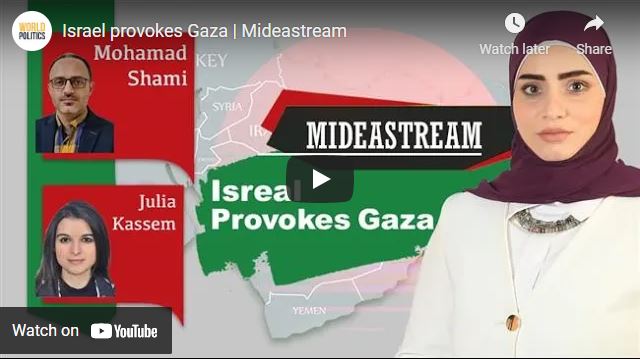 As Palestinian factions prepare for dialogue in Cairo, the invasive scene in Gaza is becoming more complex, foretelling the possibility another confrontation again, in light of Israel’s insistence on punishing the Gaza Strip. While all border crossings have been closed since the last aggression, Israel’s obstruction of the Qatari grant into Gaza poured fuel on the fire, calling for a strongly worded message from the resistance, in which it affirmed that unless the funds are released by next week, it will be concerned with taking an “important decision” regarding the cessation of hostilities.

To discuss this issue with us from Beirut is Julia Qassem, political commentator

Leader of the Ansarullah movement, Sayed Abdul-Malik al-Houthi, announced that the Yemeni people are part of the deterrence equation established by the regional resistance in linking the Israeli threat towards AlQuds to a regional war. Sayed Houthi criticized the Saudi and Emirati media in their shameful handling of the recent Israeli aggression on Gaza while praising the Iranian position. Sayed Houthi also identified three steps to attain peace in Yemen by stopping the aggression, lifting the siege and ending the occupation.

To discuss this issue with us from Sanaa is Mohammad Al Shami political commentator.