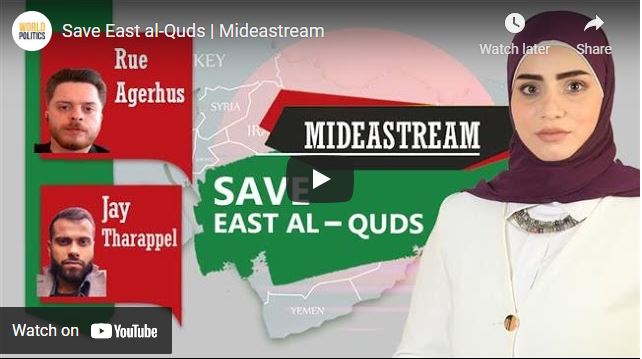 Native Palestinians carried on with their solidarity protests against forced displacement of families from the occupied East Al-Quds as Israeli occupation forces continue to raid the Sheikh Jarrah neighborhood in the occupied city, spraying skunk water, which is literally a chemically enhanced type of sewage water, and physically assaulting Palestinian residents and solidarity protesters. These protests intensified reaching Al Aqsa Mosque where dozens of Palestinians were wounded in confrontations with occupation forces at one of Islam’s holiest shrines and in other parts of the city. To discuss this issue with us from Sydney is Jay Tharappel, political writer and commentator.

Meanwhile, Yemenis from all walks of life took to the streets of Sana’a to mark the International Quds Day to express solidarity with Palestinians. The Protesters raised Palestinian flags and chanted slogans in support of the Palestinian people and said any normalization of ties with the Israeli regime is a great betrayal. Meanwhile, the supply of aid to Yemen and the lifting of the blockade is still to be implemented as it would save countless lives. Halting all Saudi bombardment campaigns and restricting the movement of Saudi-funded AlQaeda extremists might be an effective start to end this humanitarian disaster in Yemen. To discuss this issue with us from Copenhagen is Rune Agerhus, Chairman of the Yemen Solidarity Council.