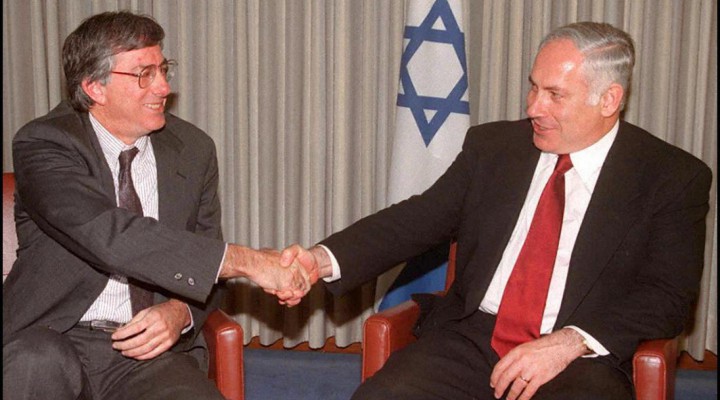 Having worked as policy planner for former US President George H W Bush, and as a Middle East negotiator and adviser for former presidents Bill Clinton and Barack Obama, Dennis Ross can safely be called an insider of Washington’s foreign policy establishment, mockingly labelled “The Blob”.

A recent article by Ross, entitled “To Deter Iran, Give Israel a Big Bomb”, provides unique insight into how this elite community thinks, operates and affects world politics. The Blob has been accused of being “a cabal bent on serving its own interests … one that protects its turf by shutting out alternative ideas and excluding dissenting voices”. It is blamed for three decades of failure in the Middle East, and for having squandered victory in the Cold War.

Blobbers’ shortcomings are numerous: dystopian views, double standards, a die-hard anthropological and moral sense of superiority (ie exceptionalism), narrowed or distorted use of history, falling prey to a groupthink that has made them immune to any challenge to their “conventional wisdom”, and being relentless in the search for enemies to destroy.

In his article, Ross offers a vivid example of such dystopian views, saying it is possible that “the desire for sanctions relief will prompt the Iranians to rejoin the [nuclear deal] … once they conclude the U.S. will make no further concessions”.

Anyone new to the issue might conclude it was Tehran who abandoned the nuclear deal and was now asking to rejoin it, on condition that the US provide some concessions. This is an Alice-in-Wonderland view of the deal’s complex history.

Signed in 2015, the nuclear deal was implemented by Iran, wholly certified by the International Atomic Energy Agency, and only partially implemented by the US. The Americans did not provide the expected sanctions relief, applying strong pressure against any country or bank intent on reestablishing trade with Iran. That was under Obama, and the Biden administration has thus far not offered any concessions.

One of the outgoing final acts of Iranian Foreign Minister Javad Zarif has been a long letter addressed to the UN Secretary General detailing six years of alleged western nuclear deal non-compliance.

In May 2018, the Trump administration formally breached the nuclear deal and adopted a “maximum pressure policy”. For a year afterwards, Iran waited in vain for the European signatories to the deal to save the sanctions relief it was entitled to; and in May 2019, Tehran began adopting its own countermeasures through reduced compliance with the deal. Unsurprisingly, Blobbers accused Iran of breaching the deal.

This past January, President Joe Biden announced that he wanted to rejoin the deal, but with his own conditions, such as extending the sunset clause, and addressing Iran’s ballistic missiles and alleged “malign activities” – in what would appear as a new deal. A few rounds of talks have taken place among the signatories, but negotiations are currently paused as the newly elected Iranian president settles in.

In the meantime, Iranian negotiators have welcomed Biden’s intentions, but not his conditions. Tehran is primarily searching for guarantees of not being cheated again.

Iran wants the US to re-enter the original deal, demonstrate a willingness to fully implement it, and offer assurances through some sort of binding ratification mechanism. Iran does not want to repeat the 2018 experience if Republicans retake Congress in 2022 – or if former President Donald Trump, or someone even worse than him, returns to the White House in 2024. Only after these guarantees (wrongly called concessions by Ross and co), would Tehran consider renegotiating the deal.

As for the infamous “malign activities”, nothing demonstrates better Blobbers’ double standards, considering the widespread evidence of “malign activities” and destabilisation carried out by US allies in the region, which Washington casually ignores. Tunisia may be the latest victim.

Blobbers are also imbued with the exceptionalism that has always shaped US foreign policy. Their perpetual search to contain Iran shows that they have a psychological problem, not a political one. Whatever the Iranian leadership says or does is irrelevant; only regime change will soothe them.

Ross, again, provides useful quotes along these lines, noting that “even successful talks might not stop Iran’s leaders from pursuing nuclear weapons”, that “inducements rarely, if ever, alter Iran’s behaviour”, and that if the US “cannot persuade Iran to temper such ambitions using carrots … it must find more effective sticks”.

Partners and allies of the US (including this author, directly, to Ross in 2009) have lobbied for years, suggesting that the establishment drop the “carrot and stick” lexicon, which has conveyed to the Iranians the irritating feeling that they are being treated as donkeys.

Blobbers also sometimes use a narrow view of history to support their case. Ross, for example, believes that Iran should be prevented from achieving a nuclear threshold capacity, which in simple terms is the know-how to quickly produce nuclear weapons if necessary. He points to Japan as an acceptable country possessing such capacity. Of course, Japan is now a responsible stakeholder of the rules-based international order; yet, going back a few decades, it was an imperialist power that brutalised its neighbours and attacked the US. Two US nuclear bombs were used in 1945 to subdue it.

Blobbers suffer from groupthink, which frequently turns into a sort of herd immunity to any challenge to their “conventional wisdom” – which, they argue, is connected to society, rather than cut off from it. Opinion polls highlight a different reality: contrary to the Blob’s viewpoint, most Americans believe that the biggest threats they are facing stem from inside the country, not outside.

Blobbers tend to identify enemies too easily, especially if they do not conform fully to the US-established “rules-based international order”. They show a deep-seated impulse to frame the “other” not simply as the bearer of different interests or values, but as the incarnation of an evil that must be erased. They sometimes convey the feeling that they need permanent enemies to justify their role – and, if necessary, they create them.

To deal effectively with Iran, Ross, unsurprisingly, proposes something quite chilling: to provide Israel with bunker-buster bombs, which would theoretically allow – according to their narrow self-served view of the rules-based international order – the destruction of Tehran’s enrichment facilities.

How such a suggestion might be conducive to the nuclear deal’s revival, or to improved regional stability, remains to be seen. Blobbers proudly claim that “global problems usually improve when the United States engages responsibly and worsen when the United States retreats”, hubristically considering themselves a professional crowd of people who have reached wisdom “through painful trial and error over more than a century”.

The first assertion flies in the face of two decades of dismal failures in the Middle East, while the second evokes a hubristic, worrisome and self-referential attitude that involves testing social engineering policies on other unlucky nations and their peoples – alongside the many low-income Americans who enrolled, fought and died in their country’s never-ending wars.