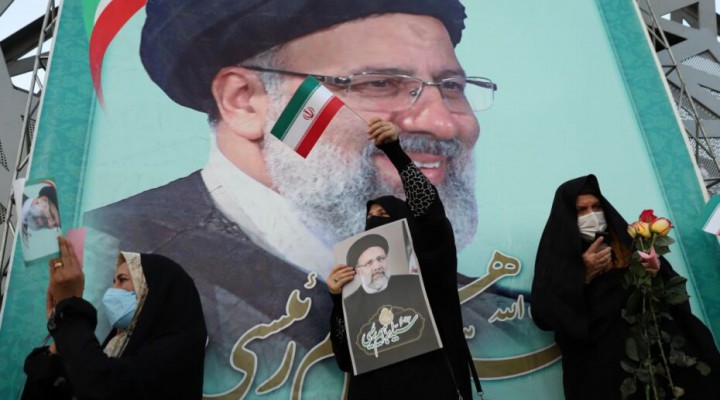 If sanctions are not lifted, Iran will hit back. And Israel will try to deter Iran from pursuing its nuclear program. The two will clash.

Here we go again. The narrative is being set. President Assad’s name cannot not be uttered in the West, save with a ‘chemical weapons’, and a ‘killing his own people’ gibe. It is just not permitted – even though this truth is disputed by some of the West’s own investigators. One is obliged to repeat this taunt, simply as the entry price to mainstream, ‘curated’ discourse.

Now, courtesy of some highly jaundiced members of the exile Iranian community in the West, the President-elect of Iran is being branded as criminal, and a figure exemplifying the “banal nature of evil”, for his 1988 involvement in the execution of Iranian dissidents. Indeed, Raisi already is under U.S. sanction for this offence, when “according to anti-Iranian folklore, hundreds of detainees were executed. But few know what really happened”, notes former Ambassador Bhadrakumar in the Asia Times.

“It is no secret that Washington encouraged Iraqi leader Saddam Hussein to wage war on Iran”, notes Bhadrakumar. “But after Iran’s Supreme Leader Ayatollah Khomeini accepted a UN-brokered ceasefire in 1988, members of the terrorist group Mujahedeen-e-Khalq (MEK), based in Iraq – heavily armed by Saddam, and enjoying the backing of the CIA – stormed across the Iranian border in a surprise attack”. Bhadrakumar continues: “Iran smashed the MEK assault – and that set the stage for the so-called “death commissions” of prisoners, terrorists and others. Inevitably, those executed included agents of Western intelligence. The executions couldn’t have been carried out except on Khomeini’s orders. Raisi was a young man of 27 when reportedly, he served on a revolutionary panel involved in sentencing Iran’s enemies to death”.

The point here is not to enter into a quibble with those exiles spilling out their bile at the Iranian election outcome. But rather, to underscore its consequences – always the inadvertent consequences to unplanned actions that have huge repercussions.

Already, as veteran Israeli commentator Ben Caspit observes, this narrative “will serve Israel’s strategic interests by branding Raisi’s country as a radical state, dangerous to its own people and the region. “Raisi is the new Ahmadinejad,” a former senior Israeli intelligence official said … and Bennett calls [Raisi] the “hangman of Tehran” for public diplomacy purposes”.

It will stick, of course. The West thrives on such Manichean framings; it suits their metaphysics. The exile Iranian opposition as ‘good’ and the Iranian establishment as irredeemably ‘evil’. The Israeli opportunism is only to be expected, and the MEK will play it in Washington and Paris – for all its worth.

To be clear, such Manichean narratives – though serving, at one instant, some domestic purpose – nonetheless place a padlock onto politics: How can Christian America ‘sup’ with the hangman of Tehran? Look how the narrative on Assad has gridlocked the West, and pushed it into unimaginable intellectual distortions, where extremist HTS (al-Qaida) is somehow ‘less bad’ than Assad, and therefore a partner.

What the crafting of such a narrative, in very practical terms, also does is to narrow the already attenuated political ‘space’ in Washington for the lifting of pressures on Iran – especially as a part of this post-election, re-booted narrative is that the election proved that it is the country itself that is dangerous to its own people and the region – and it is not just Raisi alone, that is a danger.

Just to be explicit: We are at a major point of inflection in the Middle East. Team Biden essentially has three options ahead: (1) to abandon the Vienna track; (2) to sweep away – wholesale – those U.S. sanctions (that can be lifted), and convince Tehran that normalisation of trade and Iran’s position in the global economy is guaranteed; or to lift only a ‘teaser’ set of sanctions – or (3) to leave in place a bulk of sanctions, sufficient to try to coerce Iran into accepting to negotiate its missile defences, it’s regional policies, and a JCPOA, mark 2, with added restrictions.

The second option effectively constitutes the narrow window in which a settlement might be possible – but with the Iranian election outcome revealing a marked shift in political sentiment away from engagement with the West, the opening has narrowed further. And now, the zero-sum narrative focussed on Raisi likely will narrow it yet more.

The third option – a continuation of U.S. coercive pressures, and pain, inflicted to ‘alter Iranian behaviour’, (by leaving a portion of sanctions in place) – is not likely to find favour in Tehran.

Blinken has already said that some U.S. sanctions will remain, and will be lifted when – and only when – Tehran ‘changes behaviour’. Note the quiet shift. Blinken here is not talking regulatory nuclear framework, he is going ‘Manichean’. Thus, on this metric (correcting malign behaviour), it is not a matter of how many individual sanctions remain in place, but the nature of those remaining. Evidently, the nature of those that remain must imply great pain, if they truly are to coerce a change of strategic course by an irredeemably ‘malign’ Iran. (It is another example of how the good/evil paradigm freezes politics solid).

Team Biden knows, and freely admits, that Trump’s maximum pressures did not shift Iranian behaviour. Yet Blinken is advocating the U.S. repeating what has just failed. Actually what Trump did was to persuade Iran to develop the smart missile-swarm drone deterrence that has made ‘maga-weapons’ irrelevant. It has given Iran a strategic edge.

The ‘hangman of Tehran’ meme will of course eat into Team Biden’s political capital for persuading Republicans (and some in Biden’s own party), to go along with any decisive sanctions-lifting – as it is intended. Even before the narrative-crafting, the Beltway consensus has been that Biden must retain leverage (polite-speak for inflicted pain) as the Damoclean Sword hovering above the Iranian neck.

This U.S. shift is being narrated as resulting from – and as direct consequence to – a ‘rigged election’ and to a ‘henchman’ being imposed on the Iranian polity. The idea that Raisi’s ‘hardline’ views are somehow imposed on Iranians however, doesn’t hold water, as one Iranian commentator has noted. Raisi’s views rather, match a significant portion of public opinion – like it or not – and for the very good reason of an already-violated treaty, among many other things … Even by the end of the Obama administration, few Iranians said that they had seen any economic benefits from the deal – and most lacked confidence that the other signatories would uphold their obligations. About three in five today say that Iran should withdraw from the JCPOA.

So the obsessive coverage of the person of Raisi in the media (and his Ahmadinejad-ization) simply obscures any deeper analysis of the profound change in political sentiments in Iran vis à vis the JCPOA: In the 2017 Presidential election, Raisi took 38% of votes (Rouhani won the Presidency comfortably, then); but this month, Raisi took 62% of all votes cast (and Reformists did terribly). Nearly double. Something changed for sure. This needs to be understood and addressed.

So Raisi had a solid base of popular support this time. Of that, there can be no doubt. This election outcome seemingly speaks to a shift in popular perception of the merits of Iranian’ re-absorption into the western cultural and economic sphere.

Most Iranians – including Raisi – would of course, like see sanctions cleanly removed. That would help the economy. Yet, it would come at the price – and opportunity cost – of returning the Republic to the values which originally underpinned it, and which many (not all), would like to see revived.

The Revolution essentially was about ending the westification of Iran, under the Shah. The JCPOA in effect was taking Iran back to it. Raisi is promising a wider foreign policy horizon, more firmly rooted in a look-East.

The Raisi obsession is a pity, because it also risks losing sight of a dynamic which extends well beyond Iran. It is evident that Team Biden would ideally like to tamp-down the many Middle Eastern foreign policy issues that potentially distract, and sap attention away from Team Biden’s primordial concern to advance a cultural and economic revolution in America. The team is explicit in saying that ideally it would like to pivot away from the Middle East to China – though how to do it is the problem.

To inoculate his Admin from distraction, Team Biden’s solution seems to be to thrust a ‘frog down the throat’ of those not compliant with U.S.-led ‘global order’. The frog in the throat may be sanctions; it may be the European and NATO frogs thrust into Russia’s throat; it may be ‘westification bubbles’ blown either inside China (Taiwan), or at the borders of a state (Ukraine). The ‘frogs’ serve to give the U.S. a supposed hold over these states.

The problem is that ‘the hold’ is illusory. The world has ‘had it’ with the westification implants.

These states can, and will, strike back if the planting of these ‘westification bubbles’ becomes too troublesome. Hong Kong is a clear example.

This where we are: China has several frogs (Taiwan, HK and Xinjiang) in its throat, intended to retard its breathing. Russia too, has multiple frogs thrust into its throat by the U.S. – and by the EU hypocritically claiming that sanction pain is good for correct character-building. (Josep Borrell’s tweet). The point is that the West seems to be losing its critical faculty to judge what represents ‘going too far’. There is an inevitable ratchetting forward. The result is that pre-emption of these purulent sores, before the putrefaction spreads, becomes the only logical response. This can end with war.

This is no trivial matter, for Iran is at that ‘going too far’ point of inflection – were sanctions not to be lifted. In the latter case, Iran will impose reciprocal pain on U.S. interests and allies in the region. The logic is inevitable. Yet this may arrive at the moment when Israel has lost its military ‘edge’ (except over Gaza), and when it has no political exit from its dilemma of being a minority amongst a majority (between ‘the River and the Sea’). Netanyahu’s claim of strategic victory over the Palestinian project, effectively has foreclosed on either a one or two state solution. Netanyahu’s ‘mission accomplished’ narrative simply has moved Israel structurally too far Right, politically and culturally, to allow an exit. Only military deterrence remains.

If sanctions are not lifted, Iran will hit back (deniably and in a calibrated way, across different spheres). And Israel will, in turn, try to deter Iran from pursuing its nuclear programme (or attempt its destruction). The logic is plain. The two will clash. Perhaps other fronts will open too. This is the unintended outcome – the Butterfly Effect – created by the Iranian exile hysteria generated by Raisi’s landslide in the Presidential elections, trouncing the Reformists. One hopes the narrative artists may be held accountable.

0 thoughts on “Curated Discourse, Narrative Artists and the Coming Conflicts”