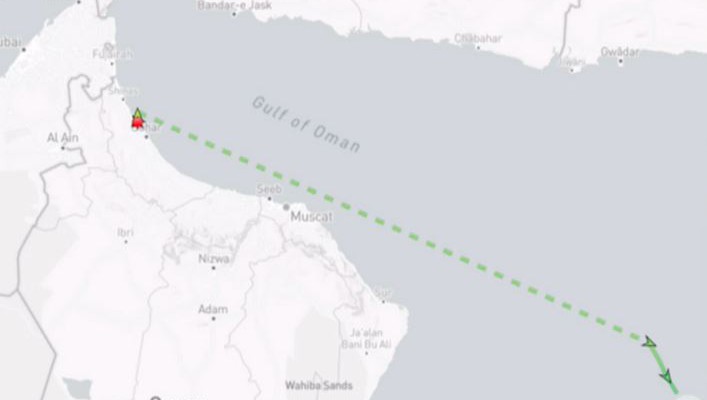 Drones struck a convoy loaded with fuel on the Iraqi-Syrian border and destroyed part of it after it reached the outskirts of the Syrian Albu Kamal border area. US newspapers claimed the US forces were not responsible and categorised the attack as Israeli strikes. Irrespective of who actually carried out the military operation, Iran received the US-Israeli message. According to Iranian officials, it pledged to reply against Israel in one of the numerous theatres in the Middle East.

US forces are deployed in northeast Syria, robbing the gas and oil, as stated explicitly by former President Donald Trump, and are in control of the Syrian main food basket.US trucks travel from Syria to Iraq, supplying the US military bases with stolen Syrian oil and wheat. In that part of Syria, the US has established airfields that Israel has used and coordinated with in recent years to strike northern Syria. Moreover, Israel has used the US logistics to carry out attacks – confirmed by the US Ambassador in Baghdad to the Prime Minister – on targets inside Iraq during separate incidents in one of which a “Popular Mobilisation Forces” commander was killed and several warehouses destroyed.

However, the Iraqi-American agreement states and confirms that no air force has the right to use Iraqi airspace without permission from Baghdad. Despite this, the US continues to conduct unauthorised flights and cross-border movements of troops between Iraq and Syria without Baghdad’s consent. Moreover, the US controls the air space, claiming this as necessary to protect its forces deployed in Iraq. Therefore, the strike came from the airspace that the US rules, and with its knowledge, because it falls within the sector of operations where American forces are on the ground and are protected by an interception missiles umbrella.

Iraq considers that the responsibility for the attack rests with the United States and therefore deserves a response. But Iran accepts the US narrative and considers Israel responsible for the operation and, consequently, generates and deserves an answer because the destroyed tanks are Iranian, not Iraqi.

Through Western and Arab mediators, Israel quickly sent messages to Iran that it had no intention of causing casualties (the actual number of deaths was not announced). Israel’s objective, it said, was to impose deterrence on the flow of weapons supply to Syria and Hezbollah via Iraq.

However, Iran has informed message bearers that it will respond to the strike and that Tehran « couldn’t care less » about messages from Tel Aviv. Therefore, the Iranian strike could be directed against direct Israeli targets or through the many theatres spread across the Middle East, particularly Palestine. The “lone wolf” Palestinian phenomena are frequently striking Israel’s national security at the core. Iran has in the past also directed missile attacks against one of the “Mossad” centres, at Erbil, Kurdistan – Iraq, and has not hesitated to hit Israeli ships on many occasions in past years. Already a loitering ammunition drone hit an oil tanker owned by an Israeli businessman in the Gulf of Oman on Wednesday.

Israel considers that its theatre of operations stretches from Lebanon to Syria, Iraq and even Iran. A deterrence policy was imposed on Syria because of Israel’s awareness of President Bashar al-Assad’s unwillingness to start a war with Israel to prevent it from carrying out hundreds of undeterred raids. Syria does not have the necessary financial means nor stockpile of missiles to initiate a battle with Israel. Moreover, due to its war in Ukraine and its need for ammunition in the aftermath of the protracted conflict, Russia will not be able to supply Damascus with the necessary weapons and interceptor missiles.

Israel succeeded in hitting the network of ground defences provided by Iran in Damascus before it entered service. Israel also prevented the landing of any Iranian cargo plane loaded with weapons or risked destroying the aircraft and paralysing the airport. It has already put the airports of Damascus and Aleppo out of service for several weeks to confirm its seriousness and determination to intercept further supplies of Iranian weapons to Syria.

Israel stopped that supply line, and now seems to be switching to the landline. However, this equation requires avoidance from hitting Iranian targets in order that Israel avoids direct conflict or provoking an Iranian response. But Tel Aviv finally signed into this, and Iran will have to respond.

Israel has violated Syria’s sovereignty since 2011 because Damascus failed to impose deterrence as Hezbollah did in Syria and Lebanon. The Iranian source claims that “imposing deterrence requires equipment, organisation, and great loss of life- and a potential war with Israel. Israel will maintain its aggressive policy against Damascus if Syria does not respond. Iran will not let Israel get away with any attack against its effectiveness against its territory or equipment or representatives, be they military or civilians.”

Lapid: toad in a lion’s mantle

0 thoughts on “Israel strikes, and Iran prepared the response”