HOME / WORLD / Iraq serious challenges: the US, Iran, ISIS Plus a “difficult to form” cabinet 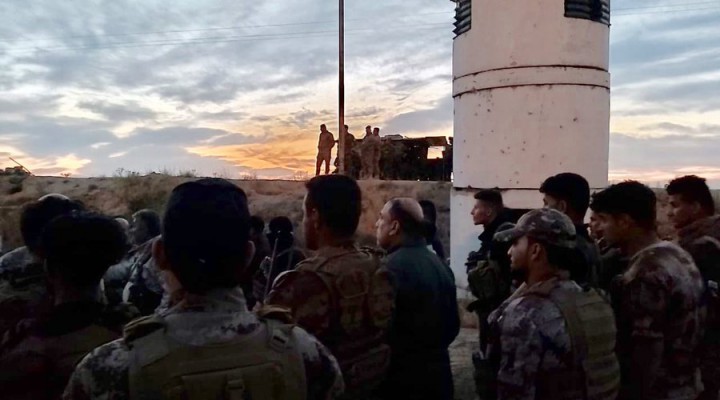 Just at the time when the country is being led by a caretaker Prime Minister, Adel Abdel Mahdi, and the newly elected Prime Minister, Mustafa al-Kadhemi (boycotted by many powerful political groups) is struggling to form his cabinet, the terror group “ISIS” is increasing its attacks on a number of Iraqi provinces. The Shia majority has asked for the withdrawal of US forces while the Sunnis and Kurds want these forces to remain, and ask instead for the withdrawal of the Iraqi security forces al-Hashd al-Shaabi or “Popular Mobilisation Forces” (PMF). ISIS is testing the military readiness of the Iraqi security forces and is taking advantage of the severe domestic differences between all political parties, knowing that the country is also facing serious financial difficulties and has a pandemic to deal with as well. The country is in crisis and the pressure is overwhelming.

ISIS is aware of the presence of security holes in various parts of Iraq, particularly around the Hamrin mountains in Salahuddin province, Jurf al-Nasr (south of Baghdad) in Babil province, Jalawla and Baqubah in Dyala province, in Karbala province, wadi Houran, along the Iraqi-Syrian borders in the al-Anbar province. Since a month ago ISIS has been harassing the security forces, mainly the PMF, and engaging with them to test their readiness- and exhaust their resources. It is also establishing fake checkpoints with men dressed as members of the Iraqi Army who arrest and kill tribal men.  This is happening in the Sunni areas, whose political leaders are asking the PMF to leave their provinces and for the US to remain in Iraq. The US, with perfect timing, has ceased its intelligence collaboration with the Iraqi forces

ISIS knows the desert and the mentality of the people living in these provinces. It also seems to be aware of the cessation of collaboration between the US and the Iraqi forces, where the Iraqi drones are insufficient to cover these provinces and collect enough intelligence information about ISIS’s movement and intentions. Thus, Iraqi forces have turned from a preventive stance to a defensive one, while ISIS moves from being the hunted to become the hunter in many provinces. It is common knowledge that the Iraqi forces have difficulties controlling the 599 km long border between Iraq and Syria, where ISIS crosses with its major forces and equipment.

Many ISIS militants somehow managed to escape from a Syrian prison run by the Kurdish Syrian Democratic Forces (SDF), a US partner, in the north-eastern city of Hasaka, a prison that held some 11,000 to 12,000terrorists captured on the battlefield. The escapees seem aware of the existence of a meeting point to join other groups still on the loose between the two borders. According to Iraqi intelligence sources in Baghdad, many of these joined sleeper cells in different provinces; some were killed and captured by the Iraqi security forces during the latest attacks.

ISIS is capable of surprise attacks and insurgency but has failed to hold its new ground, notwithstanding the violence of its attack, the biggest since 2017. It has recently attempted to control the oil road east of Tikrit by isolating the north from the southern Tikrit city in Salahuddin province and attacking Mukeshefah and Samarra. ISIS aims to regain some control over financial resources (oil) and has been gathering forces coming overland and along the Tigris river. ISIS took advantage of the Federal Police presence—unfortunately, the Federal Police are unfit to fight against irregular militants as the well-trained counter-terrorism brigade or the PMF could. While many Sunni political leaders are asking US forces stay, many tribes in Salahuddin are asking the Prime Minister to send the Hashd PMF to their villages and cities as a permanent presence following the repetitive ISIS attacks.

The assassination of the commanders Qassim Soleimani and Abu Mahdi al-Muhandis pushed Iraq to ask the US to leave the country. The US forces ceased intelligence collaboration and scheduled a meeting on the 6thof June to initiate a dialogue about the strategic relationship between the two countries- but not to organise total withdrawal. Following the Iraqi parliament’s binding decision to see the US forces out of Iraq, subsequent to Washington’s destructive decisions to violate Iraqi sovereignty and in contradiction with the agreement with Baghdad signed in 2014, these forces are no longer offering any support at all without political concessions from the Iraqi leadership.

The Prime Minister asked Hashd al-Shaabi to intervene against ISIS due to its long experience in guerrilla warfare. However, Hashd lacks air cover due to the slow and inefficient coordination between its command on the ground and the Iraqi Air Force. This handicap is allowing ISIS to resist longer on the battlefield and contributing further to Hashd’s human casualties.

ISIS is playing on the US-Iraq and the US-Iran differences in Mesopotamia. It is also showing high military readiness and capability to fight back and exhaust the Iraqi security forces. However, Hashd al-Shaabi is also showing determination to defeat the group and force its withdrawal on multiple fronts. The Iraqi command needs to find non-US resources to regain the momentum, rely on its own resources to provide surveillance and armed drone support for its ground troops and intelligence services. Perhaps Russia and Iran can fill the vacuum the US is intentionally creating. Otherwise, Baghdad will indeed manage to repel ISIS, but with much greater human losses- unless it changes its classical approach and offers a new deterrence strategy, through spreading “eyes” in the sky in the “softest” areas, those where ISIS militants move at ease, and particularly on the Iraqi-Syrian borders and in al-Anbar desert. For that, the country needs a new and strong government- certainly not a caretaker Prime Minister with limited authority, and a novice Prime Minister unable to form an adequate cabinet and lacking political support from the MPs’ group leaders.

Mr Abdel Mahdi has ordered Hashd al-Shaabi – the security forces bombed repeatedly by the US air force and accused of being loyal only to Iran – to deploy its forces in the provinces where ISIS is most likely to enjoy a greater presence. Abdel Mahdi is aware that Hashd capacities and ideology make it fitter to confront ISIS than any other brigade. But Abdel Mahdi doesn’t want to remain in power and is looking forward to handing on the office to al-Kadhemi.

However, ex-Prime Ministers Nuri al-Maliki and Ayad Allawi refused to grant support to al-Kadhemi and his cabinet because some proposed names were not part of their consensus. Al-Kadhemi is accused of favouring the Kurds and the Sunni by accommodating their candidates but disfavouring the Shia by imposing names that are considered provocative and unacceptable to many groups. Al-Kadhemi is being asked not to choose names that are unsuitable to the Shia groups, to the street and to both Iran and the US. Decision-makers in Baghdad suggested that the new PM candidate asks all parties (Sunni, Shia and Kurds) to forward names of at least 3 technocrats or 3 politicians for each seat in the cabinet allocated to them (11 for the Shia, 6 for the Sunni, 4 for the Kurds and 2 for the minorities). If all those names are unsuitable for al-Kadhemi, he can ask for another batch of names. But what he can’t do – said the source – because this would fail to gain parliamentary support—is to choose technocrats from the Shia quota disapproved by many Shia groups, and other names of politicians as forwarded by the Kurds and the Sunni.

Furthermore, Baghdad lacks a strong government, yet the foreign debts and the low price of oil are adding severely to Iraq’s deficit. Iraq needs 80 billion dollars per year but has a revenue of less than 30 billion. In the midst of this difficult situation, the Coronavirus is adding more strain on Baghdad, and tensions between the US and Iran harm the country. Both countries are fighting their own war on Iraqi soil and each side wants the other out of the country. Hashd al-Shaabi is considered an enemy of the US and Israel and is essential for Iran for keeping the US out and, for Iraq, to protect the country from ISIS. The Shia are divided, as well as the Sunnis and the Kurds. And now, as the last straw, ISIS is increasing its attacks, taking advantage of this chaotic state. It will take a miracle for Iraq to be able to stand on its feet any time soon.

Iraq serious challenges: the US, Iran, ISIS Plus a “difficult to form” cabinet.

0 thoughts on “Iraq serious challenges: the US, Iran, ISIS Plus a “difficult to form” cabinet”