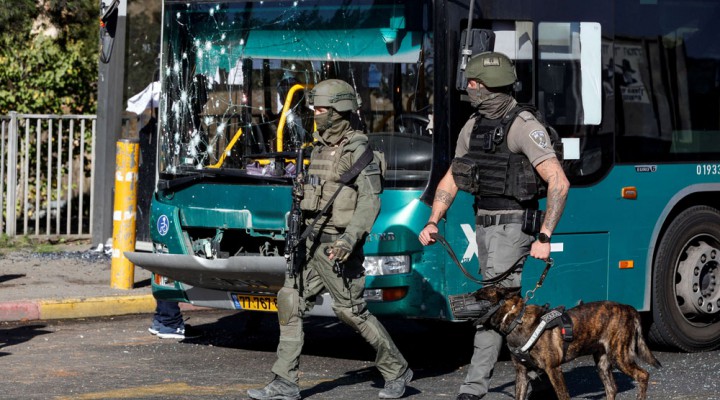 I have been predicting for months in this space that there will be a resurgence of resistance to the occupation in the occupied West Bank, more powerful, organised, and sophisticated than before. Many were sceptical about this expectation. But there has indeed been an unprecedented and qualitative escalation in attacks on Israeli troops and settlers, and it bodes ill for the occupation and its settlers, lobbyists, and newfound ‘peace’ partners.

Bus bombings are back after an absence of 20 years, and in occupied West Jerusalem no less, where twin attacks on Wednesday left two settlers dead and 14 injured, and no trace was found of the perpetrators who detonated the devices by remote control.

A number of observations can be made about these bombings which may provide clues to what we can expect in future.

First, the use of remote-control devices is an innovation, suggesting that these attacks were planned and carried out by very smart operators. This technological development may prove to be the tip of the iceberg.

Secondly, the fact that West Jerusalem was targeted, rather than East Jerusalem with its high concentration of indigenous Christian and Muslim Arab inhabitants, is an important pointer to any analyst seeking insights into possible future developments.

Third, initial investigations into the planting of these devices affirm they were not individual actions — like the recent attacks in Beersheba, Tel Aviv, Khudaira, and Bnei Brak, or the operations at the Shu’fat checkpoint and the settlement of Ariel. They are likely to have been the work of new, independent organisational structures that have access to considerable know-how.

Fourth, initial investigations indicate the perpetrators were probably blue-card holders, meaning residents of occupied Jerusalem (West Jerusalem in particular) or the areas of Palestine occupied in 1948. If true, that would mean Palestinians within the so-called Green Line are fully onboard with this armed intifada alongside their compatriots in the West Bank.

Fifth: Distressed Israeli military chiefs have started threatening retaliatory attacks, either against the Gaza Strip or by stepping up assassinations of activists in the West Bank. Either way, Israel stands to lose. In the past, reckless reactions such as these have backfired against it. This time they could re-unite the Gaza Strip and West Bank on the common ground of resistance based on a new formula: missiles from the former and bombings from the latter.

Jewish settlers in the West Bank and the 1948 areas are feeling increasingly unnerved these days. Recent Israeli studies indicate that some 60% are considering fleeing to safe havens in Europe, the US or Canada. This trend may grow once attacks target West Jerusalem, supposedly the safest of `Israeli’ cities and headquarters of the government and its ministries and security agencies.

Palestinian resistance to Israeli occupation is indeed making a powerful comeback, in younger and more sophisticated hands that confound the Israeli security forces. More should be expected in the days and weeks to come. The ‘five-star’ occupation Israel has luxuriated in cannot be maintained for long.

0 thoughts on “The resurgence of Palestinian resistance”