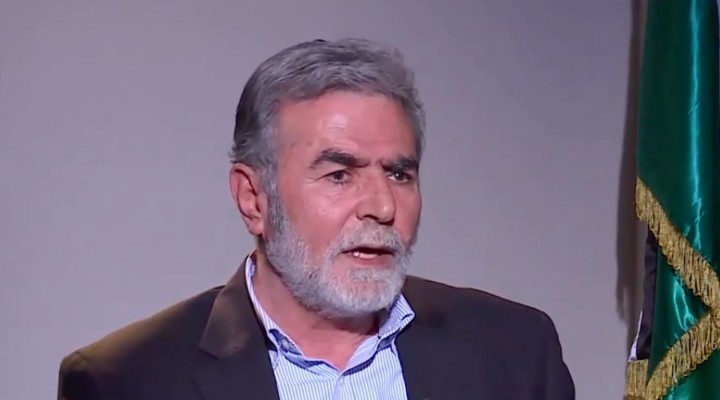 Will Israel carry its campaign of killings beyond occupied Palestine?

With the US threatening to retaliate against Iran after accusing it of being behind an alleged plot to assassinate former national security advisor John Bolton, Israeli war minister Benny Gantz issued a threat to assassinate Palestinian Islamic Jihad (PIJ) leader Ziyad Nakhaleh. He boasted that the killers could reach him anywhere, including Iran where he recently been based.

Regarding the American threat and the unsubstantiated claim about a plot against Bolton, one could note that he has often boasted about his involvement in US schemes to kill foreign leaders or overthrow their regimes by force, most recently in Venezuela. Bolton famously promised the Iranian opposition to celebrate its victory in Tehran within a year, was a major supporter of the invasion of Iraq which killed more than a million Iraqis, and enthusiastically champions every deadly Israeli assault on the Gaza Strip or Lebanon. In other words, his hands are stained with the blood of hundreds of thousands of people. That does not justify assassinating him, but it does justify indicting him for murder and war crimes.

The US which claims to respect the law and human rights and oppose assassinations, and whose current national security advisor vows to punish any attack on US citizens and especially former officials, positively gloats about its own assassination of Iranian commander Qasem Soleimani in Iraq. Meanwhile it failed to lift a finger when US citizen and Palestinian journalist Shireen Abu-Akleh was killed by Israeli army snipers, or previously when activist Rachel Corrie was crushed to death by an Israeli bulldozer.

No US administration past or present, Republican or Democrat, ever condemned or protested against serial Israeli killings of Palestinian, Lebanese, or even American citizens. Indeed, there is plenty of irrefutable evidence of them encouraging and supporting these extra-legal actions, covering up for them, and protecting them with the US veto at the UN.

The assassination of Soleimani is bound to be avenged one day. I don’t think his Revolutionary Guard comrades will forgive his killers, be they individuals or governments. I’m equally sure that PIJ and the other Palestinian resistance groups will retaliate for the assassination of their commanders and members. Hamas retaliated for the 1995 killing of Yahya Ayyash with four major bombings. And in 2001 the Popular Front for the Liberation of Palestine (PFLP) assassinated extremist Israeli minister Rehavam Zeevi to avenge the targeted killing of its leader Abu-Ali Mustafa. It is only a matter of time and timing in a long-term conflict of many rounds.

Nakhaleh, who I interviewed for four hours in Beirut last month, is a devout and resilient individual who does not fear being martyred. Indeed, he told me he was surprised that he was still alive, and that he was no better than all the Palestinian, Arab, and Muslim martyrs who had preceded him.

Gantz’s threat to take the Israeli/US war of assassination against Palestinian fighters outside the confines of occupied Palestinian crosses all red lines. It threatens the security of several world capitals and cities that could be the scene of such operations — as we saw in Europe in the 1970s and 80s.

These US/Israeli assassination wars — whether in Palestine, Iraq, Iran, Syria, Yemen, Libya. or elsewhere — will prove counter-productive in military, political, and economic terms. They will also expose the sinister local players who support and incite them as a way of stoking tensions and conflict to suit their own purposes. The US knows this. The fact that it wanted a clause included in the Iran nuclear deal committing Tehran to not retaliate for Soleimani’s killing means it recognises it made a mistake, and is terrified of the possible consequences.

The assassination of Nakhaleh in Tehran would be no less consequential. The same would apply in Beirut given Hezbollah leader Hassan Nasrallah’s pledge to retaliate immediately for the killing on Lebanese territory of any Palestinian or other guest.

0 thoughts on “Escalating the assassination war”