HOME / WORLD / Lebanon: a coup in the making? 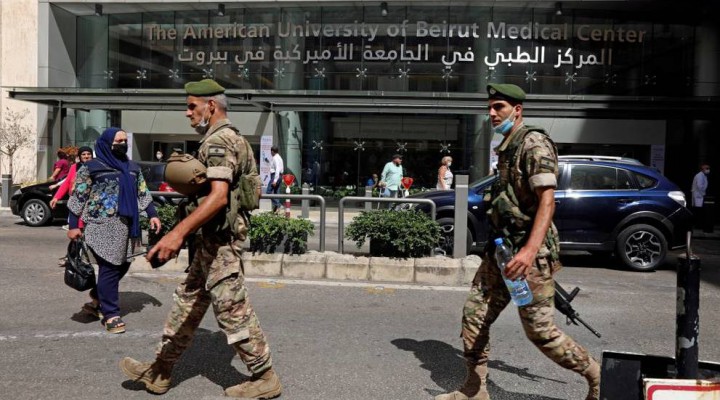 Lebanon’s Central Bank governor Riad Salameh proved he is the country’s real ruler by unilaterally deciding to lift fuel subsidies — in defiance of President Michel Aoun, Prime Minister Hassan Diab and all other critics. The move had a crippling effect on what remains of normal life in Lebanon, causing electricity and water cuts, forcing bakeries to close, and severely disrupting road travel and transport.

Four fifths of the people of Lebanon now live below the poverty line and more than a third are actually going hungry, unable to buy enough food to feed their families. Diab was right to denounce the decision. “ It is against the law and does not take account of the profound social and living conditions crisis in the country,” he said. “It has grave consequences… and plunges the country into the unknown.” But Salameh does not seem bothered about the impoverished majority of his compatriots.

It is ironic that Walid Jumblatt – whose ‘progressive socialist’ party supposedly champions the poor and needy – supported Salameh’s decision. So did ‘Doctor’ Samir Geagea, head of the Lebanese Forces party. They claimed state-subsidised Lebanese fuel was being smuggled to Syria, when in fact the reverse is true. But you only need utter the word ‘Syria’ thrice for Jumblatt to throw a fit.

Lebanon’s multiple crises have been in large part contrived by the US and France. Their aim is to bring the Lebanese to their knees and plunge the country into chaos, ultimately leading to infighting and civil war, or setting the stage for a military coup in which the commander of the army takes power and declares a state of emergency and martial law.

Lebanon lacks electricity, water, medicine and public services. Life has ground to a near standstill and become unbearable. Frustration is mounting and needs only a spark to explode. The people behind the Beirut port blast and the collapse of the Lebanese currency, never ones to be held to account, are at the forefront of the conspiracy, and they are dancing to an American tune.

The army has been begging for meals for its soldiers from France and the US, and has no fuel to power its vehicles. In what other country has an army commander publicly entreated foreign countries to cover such basic needs?

Premier-designate Najib Mikati is unlikely to succeed in his task of forming a government, or in extricating the country from its crises if he does. The local and external forces that foiled Diab’s government, and forced Saad al-Hariri to resign in order to raise tensions further, will make sure Mikati fails.

A solution could have been found to the fuel crisis by importing Iranian oil in Lebanese currency. But the US and Israel threatened to bomb any incoming Iranian tankers. They also blocked the importation of oil from Iraq, leading to the decision to lift fuel subsidies and cause the current paralysis. Had the US and its imperious ambassador in Lebanon wanted a solution to the crisis, they could have asked their Saudi and other Gulf allies to ship some fuel to Beirut. But they did not want a solution. They wanted things to get worse.

After starving the Lebanese people and encumbering every aspect of their lives, there was a foiled attempt — at the mass shooting in Khaldeh earlier this month — to trigger Sunni-Shia sectarian warfare and drag Hezbollah into it. After that failed, there have been leaks that the next step will be to push the Lebanese army to the fore to act swiftly and take control of government, dissolve parliament and suspend the constitution.

The aim of staging a ‘last resort’ military takeover would be to cause the army to split along sectarian and confessional lines and involve Hezbollah in a civil war that would plunge the country into armed anarchy for years to come.

The parties involved in this conspiracy do not care who wins or loses this impending civil war. Nor do they care about the death and suffering it would inflict or the destruction of the Lebanese state. Their objective is to bleed Hezbollah and its supporters, and try to disarm it, for the sake of Israel: to strengthen its security, allay its fears, and enable it to steal Lebanon’s reserves of money and gas.

Hezbollah, which confronted the conspiracy in Syria and helped defeat the American occupation of Iraq, is capable of confounding this Franco-American conspiracy too.

0 thoughts on “Lebanon: a coup in the making?”