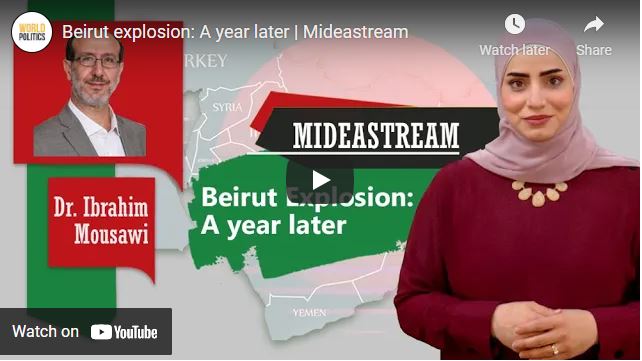 A year after the explosion that rocked Beirut on August 4, 2020, killing 218 people, injuring more than 7,000 and devastating much of the city, the Lebanese investigation into the blast has yielded no credible results. Families of the victims, some of whom are calling for an international investigation, are sadly being beaten by riot police a year after the tragedy for simply demanding the truth about what killed their kids, mothers, fathers and loved ones.

A year after the explosion, none of the victims’ families in Lebanon have been asked to give witness statements. Nor have they received any form of official apology or even been contacted by Lebanese authorities.

Families of the victims and every Lebanese citizen want answers to their “many questions”. They want to know why the ammonium nitrate was in the port, who ordered it and what’s happened to the rest of it since just 750 tons out of the 2,750 stored there reportedly exploded. Just imagine what would have happened to Beirut and its greater surrounding areas had all the 2,750 tons exploded. I can’t imagine. We want to know if there were other explosives kept in the port, and how the fire that triggered the explosion was started. And whether it was really just a fire or was it an act of terrorism.

To discuss this issue with us from Beirut is Member of Lebanese Parliament Dr. Ibrahim Mousawi from the loyalty to the resistance bloc, Hezbollah.

Sure, knowing the truth will not bring our victims back, it will not heal the soul of my youngest child who still jumps in fear anytime there is a thunderstorm although her face healed and she now laughs about how she had a clown nose for weeks after the “big bang” as she calls it, but when Lebanon’s ruling elite pay for what they did, maybe we can have a change here in Lebanon and we can live in a normal country.

Lebanese authorities initially promised a swift investigation into the blast, vowing to deliver “results within five days”. Yep, that is FIVE days.

But over the past 12 months, the investigation into the biggest crime in Lebanon’s history has been marked by little more than obstruction, evasion, and delay.

We continue with Member of Lebanese Parliament Dr. Ibrahim Mousawi from the loyalty to the resistance bloc, Hezbollah.

0 thoughts on “A Year After Beirut Explosion Atrocity–MES EP.118”