HOME / Multimedia / Calling Sanctions by Their Name: Rania Khalek on US Mideast Genocide 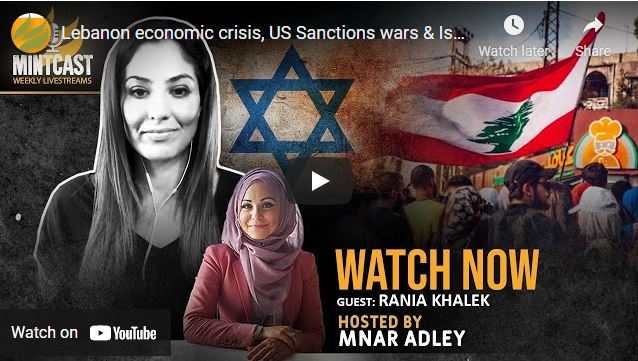 Around one quarter of the world lives in countries under unilateral United States sanctions. While American government officials insist that sanctions are targeted at officials committing human rights abuses in foreign countries, the United Nations notes that they always “disproportionately affect the poor and most vulnerable.”

In Cuba, U.S. sanctions are causing shortages that led to widespread protests earlier this summer and are slowing the worldwide rollout of Cuba’s domestically produced coronavirus vaccine. U.S. government documents explicitly state that the goal of the blockade of the island is to “decrease monetary and real wages, to bring about hunger, desperation and [the] overthrow of [the] government.”

U.S. sanctions on Venezuela, too, have been widely condemned, and are estimated to have caused the deaths of over 100,000 people.

It is in the Middle East, however, where U.S. economic measures have arguably had the most impact. Our guest today has first-hand experience of this. Rania Khalek is a Lebanese-American journalist based in the Middle East. In addition to being a presenter on Breakthrough News, she is co-host of the Unauthorized Disclosure podcast. You may also have seen her work in ​​The Grayzone, The Intercept, Truthout, Fairness and Accuracy in Reporting, Al-Jazeera, The Nation, Salon, AlterNet or Vice.

Today, Khalek speaks about the impact of sanctions across the Middle East and the current political situation in Lebanon, Syria and beyond.

In Iraq in the 1990s, U.S. sanctions are thought to have cost the lives of around 1 million people, including half a million children under five years old. Successive United Nations diplomats tasked with overseeing the sanctions regime resigned in protest, citing a breach of the Genocide Convention. “I’ve been using the word ‘genocide’ because this is a deliberate policy to destroy the people of Iraq. I’m afraid I have no other view,” said former U.N. Humanitarian Coordinator for Iraq Dennis Halliday. When pressed on the issue, then-Secretary of State Madeline Albright did not dispute the numbers, merely assuring “60 Minutes” that “the price is worth it.”

Today, much of the region — including Syria, Iran and Lebanon — is under similar, crushing American sanctions. At the height of the pandemic, Iran was unable to import personal protective equipment, medicine and other medical goods, as no country wanted to risk Washington’s ire by trading with Tehran. In the end, the World Health Organization itself stepped in, directly trading with the Islamic Republic, one key factor in the Trump administration’s withdrawal from the body last year.

Meanwhile in Lebanon, the country is struggling to recover from an enormous explosion that wiped out much of central Beirut last year. Food and electricity remain in short supply.

Critics of sanctions argue that they are a blatant breach of international law and that they are a new form of economic warfare. One former United Nations special rapporteur described them as akin to a medieval siege. At a time when both countries are trying to recover from destruction caused by a catastrophic explosion or years of war, Lebanon and Syria’s economic situation is being intentionally held back by Washington, as Khalek explained today.

Sanctions on Syria – a silent death and killing hope

0 thoughts on “Calling Sanctions by Their Name: Rania Khalek on US Mideast Genocide”