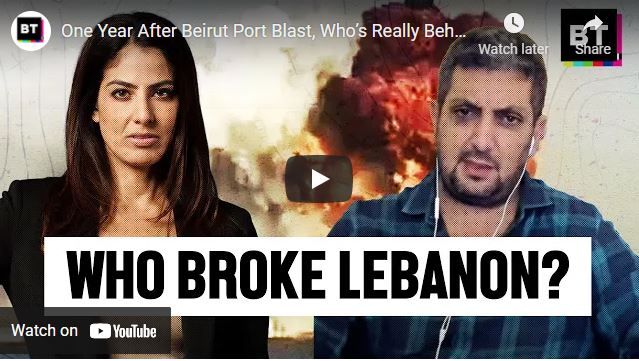 It’s been one year since the Beirut port exploded, killing over 200 people and wounding thousands. And it’s been almost two years since Lebanon’s Ponzi scheme economy started crashing.

The West often blames the devastation that has befallen Lebanon on government mismanagement, sectarianism, bureaucratic incompetence, internal corruption, and their favorite boogeyman, Hezbollah. But you can’t speak honestly about Lebanon’s problems without mentioning the constant US, Saudi, and Israeli meddling, western imperialism, the neoliberal dystopia that was imposed on Lebanon, and US sanctions. And you can’t isolate Lebanon from destructive US policies in the countries surrounding it, from Syria and Iraq to Iran and Palestine.

To discuss how Lebanon got to where it is, Rania Khalek was joined by Jamal Ghosn, a columnist at the leftist Lebanese newspaper, Al Akhbar.

1:53 Difficulties of daily life in Lebanon
5:54 Who is responsible for the Beirut port explosion?
11:43 Has the investigation into the Beirut port explosion been politicized?
15:58 Lebanon’s political divide and the western meddling that fuels it
22:58 The failure of the West’s Lebanese allies to deliver
26:02 Why did Lebanon’s economy collapse?
31:16 Responding to those who blame Hezbollah for Lebanon’s economic collapse
32:52 The Taif agreement and Lebanon’s oligarchs and cartels
35:37 Understanding Lebanon’s political crisis and government deadlock
38:28 The lights go out (again)
39:35 How US sanctions across the Middle East impact Lebanon
45:25 How Western media uses local corruption to whitewash Western imperialism
51:40 Is sectarianism the primary problem in Lebanon? Not exactly
53:13 Why is the Lebanese left so weak?
1:01:42 Why did the October 2019 protests fail to change the system?
1:06:48 Is there a risk of civil war?
1:11:52 How are Lebanese communities adapting to the crisis and pursuing self-reliance?
1:22:00 How much worse can it get in Lebanon?
1:25:13 Is Riad Salameh a US asset?
1:26:53 Currency devaluation and manipulation
1:29:39 What Americans need to understand about what’s happening in Lebanon

0 thoughts on “One Year After Beirut Port Blast, Who’s Really Behind Lebanon’s Collapse?”