HOME / WORLD / Blinken’s Winking and Nodding to the Neocons 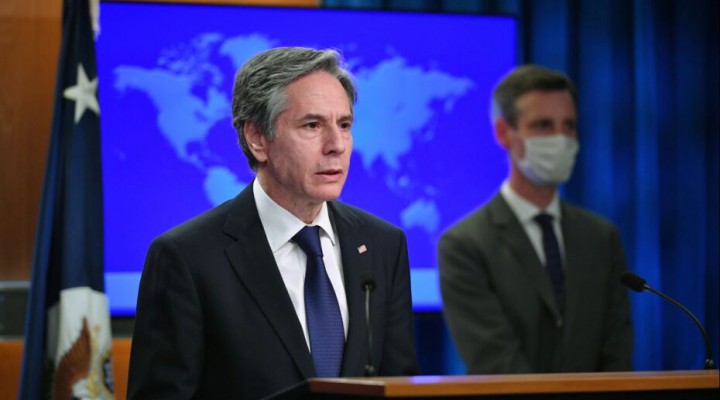 Biden’s Western Hemisphere foreign policy is not much different from that of Obama’s.

Like proverbial bad pennies, the neocon imperialists who plagued the Barack Obama administration have turned up in force in Joe Biden’s State Department. Secretary of State Antony Blinken has given more than winks and nods to the dastardly duo of Victoria Nuland, slated to become Blinken’s Under Secretary of State for Political Affairs, the number three position at the State Department, and Samantha Power, nominated to become the Administrator of the U.S. Agency for International Development (USAID).

Nuland and Power both have problematic spouses who do not fail to offer their imperialistic opinions regardless of the appearance of conflicts-of-interest. Nuland’s husband is the claptrappy neocon warmonger Robert Kagan, someone who has never failed to urge to prod the United States into wars that only benefit Israel. Power’s husband is the totally creepy Cass Sunstein, who served as Obama’s White House “information czar” and advocated government infiltration of non-governmental organizations and news media outlets to wage psychological warfare campaigns.

True to form, Blinken’s State Department has already come to the aid of Venezuela’s right-wing self-appointed “opposition leader” Juan Guaido, whose actual constituency is found in the wealthy gated communities of Venezuelan and Cuban expatriates in south Florida and not in the barrios of Caracas or Maracaibo.

Blinken and his team of old school yanqui imperialists have also criticized the constitutional and judicially-warranted detention of former interim president Jeanine Áñez, who became president in 2019 after the Movement Toward Socialism (MAS) government of President Evo Morales was overthrown in a Central Intelligence Agency-inspired and -directed military coup. The far-right forces backing Áñez were roundly defeated in the October 2020 election that swept MAS and Morales’s chosen presidential candidate, Luis Arce, back into power. It seems that for Blinken and his ilk, a decisive victory in an election only applies to Joe Biden and Kamala Harris, not to Arce and MAS in Bolivia.

It should be recalled that while Blinken was national security adviser to then-Vice President Biden in the Obama administration, every sort of deception and trickery was used by the CIA to depose Morales in Bolivia and President Nicolas Maduro in Venezuela. In fact, the Obama administration, with Hillary Clinton as Secretary of State, claimed its first Latin American political victim when a CIA coup was launched against progressive President Manuel Zelaya of Honduras. Today, Honduras is ruled by a right-wing kleptocratic narco-president, Juan Orlando Hernández, whose brother, Tony Hernández, is currently serving life in federal prison in the United States for drug trafficking. For the likes of Blinken, Power, Nuland, and former Obama national security adviser Susan Rice, who currently serves as “domestic policy adviser” to Biden, suppression of progressive governments and support for right-wing dictators and autocrats have always been the preferred foreign policy, particularly for the Western Hemisphere. For example, while the Biden administration remains quiet on right-wing regimes in Central America that are responsible for the outflow of thousands of beleaguered Mayan Indians to the southern U.S. border with Mexico, it has announced that Trump era sanctions on 24 Nicaraguan government officials, including President Daniel Ortega’s wife and Nicaragua’s vice president, Rosario Murillo, as well as three of their sons – Laureano, Rafael, and Juan Carlos – will continue.

Biden’s Western Hemisphere foreign policy is not much different from that of Obama’s. Biden and Brazilian far-right, Adolf Hitler-loving, and Covid pandemic-denying President Jair Bolsonaro are said to have struck a deal on environmental protection of the Amazon Basin ahead of an April 22 global climate change virtual summit called by the White House. A coalition of 198 Brazilian NGOs, representing environmental, indigenous rights, and other groups, has appealed to Biden not to engage in any rain forest protection agreement with the untrustworthy Bolsonaro. The Brazilian president has repeatedly advocated the wholesale deforestation of the Amazon region. Meanwhile, while Biden urges Americans to maintain Covid public health measures, Bolsonaro continues to downplay the virus threat as Brazil’s overall death count approaches that of the United States.

Blinken’s State Department has been relatively quiet on the Northern Triangle of Central America fascist troika of Presidents Orlando of Honduras, Alejandro Giammattei of Guatemala, and Nayib Bukele of El Salvador. Instead of pressuring these fascistas to democratize and stop their genocidal policies toward the indigenous peoples of their nations, Biden told Mexican President Andrés Manuel López Obrador that he would pump $4 billion into supposed “assistance” to those countries to stop the flow of migrants. Biden is repeating the same old American gambits of the past. Any U.S. assistance to kleptocratic countries like those of the Northern Triangle has and will line the pockets of their corrupt leaders. Flush with U.S. aid cash, Honduras, Guatemala, and El Salvador will be sure to grant contracts to greedy Israeli counter-insurgency contractors always at the ready to commit more human rights abuses against the workers, students, and indigenous peoples of Central America.

Biden is also in no hurry to reverse the freeze imposed by Donald Trump on U.S.-Cuban relations. Biden, whose policy toward Cuba represents a fossilized relic of the Cold War, intends to maintain Trump’s freeze on U.S. commercial, trade, and tourism relations with Cuba. Biden’s Homeland Security Secretary, Alejandro Mayorkas, a Jewish Cuban-American expatriate, is expected to reach out to right-wing Cuban-Americans in south Florida in order to ensure Democratic Party inroads in the 2022 and 2024 U.S. elections. Therefore, even restoring the status quo ante established by Barack Obama is off-the-table for Biden, Blinken, and Mayorkas. The chairman of the Senate Foreign Relations Committee, the Cuban-American and ethically-challenged Democrat Bob Menendez, has stated there will be no normalization of pre-Trump relations with Cuba until his “regime change” whims are satisfied. Regurgitating typical right-wing Cuban-American drivel, Mayorkas has proclaimed after he was announced as the new Homeland Security Secretary, “I have been nominated to be the DHS Secretary and oversee the protection of all Americans and those who flee persecution in search of a better life for themselves and their loved ones.” The last part of that statement was directed toward the solidly Republican bloc of moneyed Cuban, Venezuelan, Nicaraguan, and Bolivian interests in south Florida.

While Blinken hurls his neocon invectives at Venezuela, Bolivia, Nicaragua, and Cuba, he remains silent on the repeated foot-dragging by embattled and highly unpopular right-wing Chilean President Sebastian Pinera on implementing a new Constitution to replace that put into place in 1973 by the fascist military dictator General Augusto Pinochet. The current Chilean Constitution is courtesy of Richard Nixon’s foreign policy “Svengali,” the duplicitous Henry Kissinger, an individual who obviously shares Blinken’s taste for “realpolitik” adventurism on a global scale.

While Blinken has weighed in on the domestic politics of Bolivia, Venezuela, Nicaragua, and Cuba, he has had no comment on the anti-constitutional moves by Colombian far-right authoritarian President Ivan Duque, the front man for that nation’s Medellin narcotics cartel. It would also come as no surprise if Blinken, Nuland, and Power have quietly buttressed the candidacy of right-wing banker, Guillermo Lasso, who is running against the progressive socialist candidate Andrés Arauz, the protegé of former president Rafael Correa. Blinken can be expected to question the results of the April 11 if Lasso cries fraud in the event of an Arauz victory. Conversely, Blinken will remain silent if Lasso wins and Arauz cries foul. That has always been the nature of U.S. Western Hemisphere policy, regardless of what party controls the White House.

0 thoughts on “Blinken’s Winking and Nodding to the Neocons”