HOME / WORLD / In Search of Enemies 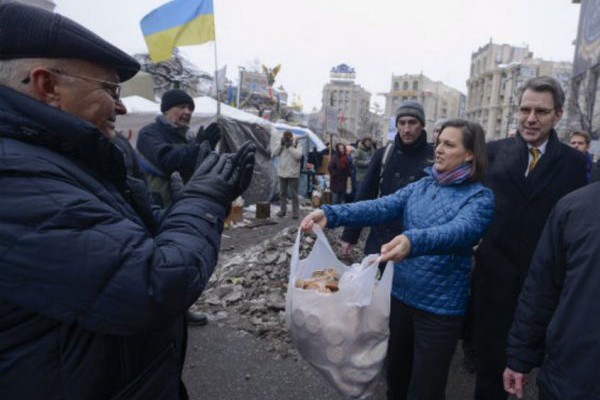 What occurred at the United States Capitol last week was surely reprehensible, but to my mind the real enduring damage that was done to our form of government took place in a basement in Wilmington Delaware where president-designate Joe Biden was putting together some of the final pieces of his foreign policy and national security team. Hopes that the Democrats would accommodate their progressive wing to some extent by backing off of the aggressive “American first” policies pursued by Donald Trump and Mike Pompeo were extinguished with the elevation of Wendy Sherman and Victoria Nuland to the number two and three senior positions at the State Department, to back up Secretary of State designate Tony Blinken.

Nuland is perhaps the surprise appointment as she famously was the Obama Administration’s regime change monster when she served as Assistant Secretary of State. She was the prime mover of the blatantly interventionist policy in Ukraine, featuring herself and Senator John McCain sauntering around Kiev’s Maidan Square handing out cookies to rioters. Thousands died when political turmoil over a contested election turned into an out-and-out coup complete with mystery riflemen shooting into the mobs to energize them. The regime change was funded by $5 billion courtesy of the U.S. taxpayer and it also riled Russia, which shares an extensive border and economic links with Ukraine. The coup was, by the way, intended to replaced a Russia-friendly head of state with someone who was not so inclined. Astonishingly, the Kremlin was able to figure that out and responded by resuming possession of the Crimea, which was largely populated by Russians.

Nuland became best known after the fact when she was foolish enough to speak on an unencrypted cell phone in a discussion relating to whom the United States would install to run post-coup Ukraine. When her interlocutor objected that the European Union might want to have some say, perhaps as a mediator, in how Ukrainian politics might play out, she responded “Fuck the E.U.,” which might be regarded as Diplomacy 101 neocon style.

Victoria Nuland has been active in the government to private sector revolving door since Obama departed the White House, giving interviews and writing op-eds critical of the Trump State Department and of the policies being promoted. She has been CEO of the neocon Center for a New American Security, held a revolving door sinecure at the Boston Consulting Group and another at the Albright Stonebridge Group. Apparently her record of being seriously wrong in foreign policy has only served to improve her resume in Washington’s hawkish foreign policy establishment. Her return to power might also be due to the profile of her husband Robert, who was one of the first neocons to get on the NeverTrump band wagon back in 2016 when he endorsed Hillary Clinton for president and spoke at a Washington fundraiser for her, complaining about the “isolationist” tendency in the Republican Party exemplified by Trump.

Wendy Sherman is less well known. She has been nominated to become the Deputy Secretary of State. She is currently a Senior Counselor also at the Albright Stonebridge Group and a Senior Fellow at Harvard Kennedy School’s Belfer Center for Science and International Affairs. She is regarded as a protégé of the Clintons and in particular of ex-Secretary of State Madeleine Albright, she of 500,000 dead Iraqi children was “worth it” boast. Sherman knows Biden from having previously served in the Obama Administration as Under Secretary of State for Political Affairs, the fourth-ranking official in State, from September 2011 to October 2015. During the Clinton Administration, she served as Counselor of the United States Department of State and Special Advisor to the President and Secretary of State and North Korea Policy Coordinator. Under Obama she was the chief negotiator on the Iranian nuclear program. She was regarded as a hardliner, saying “We know that deception is part of the DNA” of Iranians and she was characteristically careful to brief the Israelis on everything that she was doing. The White House was intent on coming to an agreement nevertheless, which was signed in 2015 as the Joint Comprehensive Plan of Action (JCPOA), a pact which has since been rejected by Donald Trump and which Biden may or may not seek to resuscitate.

>And then there is Tony Blinken, who apparently will be the boss of both Sherman and Nuland. Blinken is in some respects Israel’s lead man in Washington. He was a strong supporter of invading Iraq and even recommended partitioning the defeated nation into three parts. He was a supporter of destroying Libya and an architect of the anti-Syria policy pursued by Obama. In an interview in the Times of Israel Blinken confirmed Biden’s position on possibly reducing aid to Israel if the Jewish state were to do things that damaged U.S. interests. Blinken “…reiterated Biden’s position that he would not condition aid to Israel. He [Biden] is resolutely opposed to it. He would not tie military assistance to Israel to any political decisions it makes, full stop.” Dennis Ross, often described as Israel’s lawyer, praises him for having “…an instinctive emotional attachment to Israel,” referring to Blinken’s frequently cited Jewish and refugee roots. It was an interesting unambiguous admission from Blinken that both he and Joe Biden put Israeli interests ahead of those of the United States.

Blinken’s personal view of unfettered support for Israel allegedly derives from his stepfather having claimed to be a survivor of the so-called holocaust, a tale that he invoked several times during his acceptance speech on November 24th. The Times interview concluded with Blinken asserting that “One of the things that’s really shaped the vice president’s… career-long support for Israel and its security is the lesson of the Holocaust. He believes strongly that a secure Jewish homeland in Israel is the single best guarantee to ensure that never again will the Jewish people be threatened with destruction.”

The indefatigable Israel-firster Tony Blinken has also served as a “conduit” to those in government for Israel advocacy groups like the American Israel Public Affairs Committee (AIPAC). And now that we have Tony Blinken as Secretary of State Designate the door will soon be even more wide open to the Israel Lobby than it was under Trump. And Nuland and Sherman, both of whom are also Jewish and ardent Zionists, will be along for the ride.

And outside of State, we have Avril Haines as Director of National Intelligence (DNI). Haines is a former CIA and National Security Council (NSC) officer who was directly engaged in suppressing much of the classified report on the torture program run by the Agency out of secret prisons. She was instrumental in making sure that no CIA officers were punished for their war crimes and worked with Obama’s intelligence adviser John Brennan to enable the infamous drone program. When Haines was the NSC’s top lawyer, Brennan was the keeper of the so-called “kill list” of American citizens overseas that he and Obama would review every Tuesday morning. It was Haines who provided the legal authorizations to launch missile attacks from drones and she has never been held accountable for any of her decisions. There is little doubt that she will persist in her hardline views as DNI. Like Blinken, Nuland and Sherman she is also Jewish and it should be presumed her pro-Israel credentials are rock solid.

interview published in the New Yorker in July 2014 he is quoted as describing a 2011 meeting in Moscow with then Prime Minister Vladimir Putin. Biden claimed that “I had an interpreter, and when he was showing me his office I said, ‘It’s amazing what capitalism will do, won’t it? A magnificent office!’ And he laughed. As I turned, I was this close to him, I said, ‘Mr. Prime Minister, I’m looking into your eyes, and I don’t think you have a soul’.” Pressed on whether the tale was true, Biden confirmed it, “absolutely, positively . . . And he looked back at me, and he smiled, and he said ‘We understand one another’.”

The story is, like so many others in the Biden Song Book an apparent fabrication, according to others who were on the same trip. The meeting never took place. Does Biden really believe it to be true? More important, does he frequently engage foreign leaders by first insulting them before looking into their eyes and discerning whether they have a soul or not?

The Trump Administration’s view of both Russia and China is unreservedly antagonistic, a stance that is likely to continue and even get worse with the Democrats in power. The two nations are currently regarded by policymakers in Washington as actual “enemies” and U.S. national defense strategy includes the government’s belligerent intention “To restore America’s competitive edge by blocking global rivals Russia and China from challenging the U.S. and our allies.” And on 25 October 2020, Biden made the point publicly, declaring that “the biggest threat to America right now in terms of breaking up security and our alliances is Russia.”

0 thoughts on “In Search of Enemies”