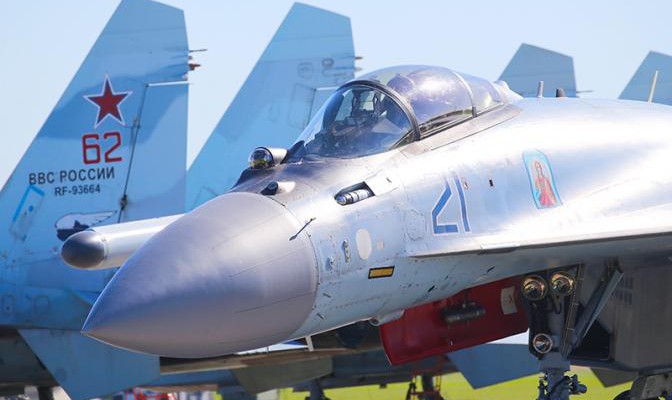 svpressia- Sending the Russian Federation the most modern fighter jets to Iran hurries Tel Aviv with a strike on Persian nuclear facilities. Then it might be too late

According to the American analytical Institute for the Study of War (ISW), with a high degree of probability, a large group of Iranian pilots and ground aviation specialists have just arrived in our country for retraining on Russian Su-35SE type fighters. “If this information is correct, it follows that Iran may receive Russian Su-35 aircraft in exchange for drones, which could be part of the agreement signed by Moscow and Tehran on July 26,” ISW experts suggested.

Let’s add: if in reality this is the case, then it turns out that the military-technical deal concluded between Iran and Russia just a little more than a week ago has begun to be implemented at a frantic pace. This is also evidenced by the data leaked to the press that only in the period from May 24 to July 31, Iranian transport aircraft made as many as 18 mysterious flights to the Russian Federation.

What was on board and with what they flew back is unknown. For example, in the United States there is little doubt that such a sudden Russian-Iranian air activity means the start of deliveries to us from Tehran of “hundreds of strike UAVs in an accelerated time frame.” As early as July 16, the US presidential administration, referring to their intelligence, stated this with all certainty.

Naturally, neither the Persians nor we have confirmed this. And it would be strange if the opposite happened. Since it is quite clear that we need highly advanced Iranian drones primarily for military operations in Ukraine. And the imminent appearance on any front of any new weapon is always a military secret.

In addition, passenger air traffic between some Russian and Iranian cities is sharply intensified. For example, regular flights to Tehran are about to start from the airports of Astrakhan and Ufa. And who knows that they will carry quite peaceful liners along these new routes, except for curious tourists and business travelers?

However, the current ISW message goes far beyond the framework of the Russian-Ukrainian military confrontation alone. Since the appearance of a sufficient number of Su-35SE in the Ayatollah regime can dramatically change the balance of power along the Israel-Iran and US-Iran lines.

How will it look like? Both the Americans and the Israelis, not hiding at all, have been especially intensively preparing in recent months for an aerospace operation against Iran’s nuclear facilities. They are driven by a lot. For example, such a recent phrase of the former Israeli Prime Minister Ehud Barak, published in the state magazine Time on July 26 : “This summer, Iran will de facto turn into a threshold nuclear state.”

For the Jewish state, this sounds almost like a death sentence. Since the complete physical destruction of this country has long been proclaimed the doctrinal goal of official Tehran.

Based on this, back in early 2021, IDF Chief of Staff Aviv Kochavi announced that he had instructed the Israeli military to immediately begin developing new plans for a preventive attack on Iran.

As a result, in June 2022, the IDF conducted a series of very large-scale military exercises over the Mediterranean Sea, including the territory of Cyprus, under the general name “Chariot of Fire”. All types of troops took part in the maneuvers. But the main role was assigned to strike aircraft. Which, according to the statement of the Israel Defense Forces, published on June 1, worked out “long-range flight, refueling in the air and striking at distant targets.”

Thus, absolutely openly, in front of the eyes of the whole world, a large-scale attack on Iran was simulated. Including its nuclear facilities.

Commenting on what is happening, the local newspaper The Times of Israel wrote that if such plans are implemented, the Israelis should in any case prepare for instant and harsh retribution from Iran. And retribution throughout the Middle East region.

However, it is clear that, even realizing all the risks, Tel Aviv expects, with the closest support of the Americans, to minimize the combat capabilities, primarily of the Iranian army, with one massive air strike. And only then begin to deal with the Lebanese, Syrians and Shiite guerrilla formations such as Hezbollah, who, of course, will not be slow to enter into a battle steeply involved in nuclear weapons. Equal to which, it seems, did not know not only the Middle East, but probably the rest of the world.

That is why, by the way, according to military sources in Israel, as The Times of Israel points out, during the series of exercises “Chariot of Fire” two months ago, the IDF’s order of operations was worked out on several fronts at once. Almost along the entire perimeter of the borders of the Jewish state.

At the same time, it is obvious that the main thing here is the maximum combat effectiveness and the most complete surprise of the first aerospace strike against Iran. All the calculations of Tel Aviv and Washington for the instantaneous disarmament of the Persians are definitely based on the well-known weaknesses of the very outdated Iranian Air Force. Which the country, which was under devastating and almost global sanctions for decades, simply did not have the opportunity to update.

According to the American magazine Forbes, Iran has not bought a single fighter jet since the early 1990s. This led to the fact that today the main striking force of its air defense aviation turned out to be American F-14A Tomcat fighters (up to 43 units) and F-4 Phantom II, which were delivered to the country in the 1960-1970s, during the reign of the last Shah .

It seems that there are up to 36 former Iraqi MiG-29A / U / UB, which, together with a dozen French-made Mirage F1s, were transferred by the Iraqis themselves to Persian airfields in 1991 in order to save them from destruction by the US Air Force during the well-known Operation Desert Storm “. However, the condition of these machines is unknown.

In a word, such a dull picture simply provokes the enemies of the Persians into an almost irresistible now, by the forces of their fighter aircraft, a missile and bomb strike on a huge scale. But, Forbes believes, the situation for the United States and Israel will change dramatically if Tehran soon receives at least about an air regiment of the most modern Russian Su-35SE.

The magazine writes: “More than two dozen Su-35SE 4++ generation fighters equipped with thrust vector control and the H135 Irbis, a phased array radar developed by the V. V. Tikhomirov Research Institute, will be able to strengthen Iran’s air power, becoming a temporary solution in the process of gradually updating the country’s air fleet over the next decade.

By the way, how many and when will Moscow actually be able to deliver such aircraft to its neighbors? In exchange for perhaps the world’s best Iranian attack and reconnaissance-strike drones, or for crude oil? It is possible that both at the same time, and at the same time.

According to Iranian military aviation specialist Babak Tagvi , the mentioned agreement between Moscow and Tehran includes the purchase of at least 24 Su-35S heavy fighters, most of which have already been manufactured in Komsomolsk-on-Amur. Initially, these aircraft were intended for delivery to the Egyptian Air Force under a contract signed back in 2018.

The Egyptians, for about $3 billion, were supposed to be the first owners of three dozen Su-35s in the Middle East. But they did not – because of the most serious opposition from the Americans. They simply threatened Cairo that if they purchased Russian aircraft, they would stop technical support for the combat readiness of a fleet of more than 200 F-16 aircraft, dozens of AH-64 Apache helicopters and hundreds of M-1 Abrams tanks. In other words, they will stop supplying spare parts for their repair and maintenance.

Therefore, ARE, with great apologies, was forced to “turn on the back” when the first 15 Su-35SEs ready for departure were already standing for her at the Far Eastern factory airfield. As far as is known, since then Moscow has not been able to attach them anywhere. But here, as it turns out, Iran has come in handy in this regard.

Based on this, it is reasonable to assume that the only thing that limits the flight time of our first export fighters from the shores of the Pacific Ocean to the coast of the Caspian Sea is the time required for the initial combat training of Persian pilots. Realizing this, Tehran probably sent its most experienced fighter pilots to our aviation training center in Lipetsk, whose retraining for new equipment will certainly take not years, but months.

Alas, another consequence of this information could be a very powerful military-political undermining of the Middle East soon. Because Israel cannot fail to understand that with the advent of dozens of Su-35SEs near Tehran, the Persians’ ability to repel an aerospace attack on their country will increase dramatically. Consequently, with the implementation of what has been worked out during the “Fiery Chariot”, the Jewish state may risk hurrying. In this case, the Middle East is very likely to explode sometime before the beginning of 2023.